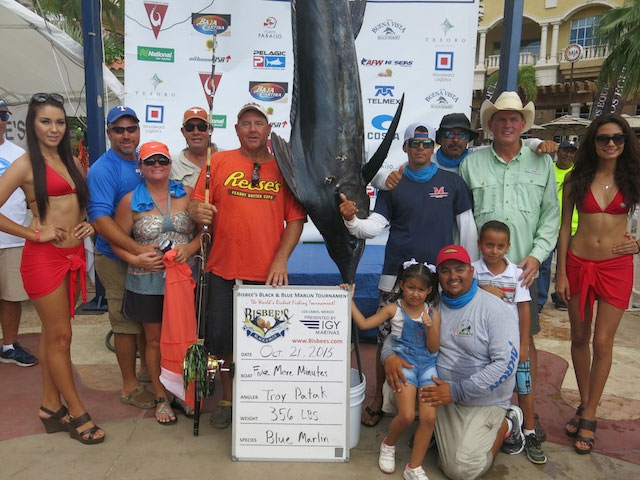 Team names are always an interesting subject in a highly competitive tournament like the Black & Blue. Many reflect tackle themes, regional loyalty or bravado. Some are clever phrases while others aren’t publishable on a family web site. But all represent the spirit and personality of the individual teams entered. The first day of the 2015 Bisbee’s Black & Blue, with more than $3.515 million on the line, certainly underscored that point.

Take the first qualifying fish, for example. Fooled on a green and black plunger lure and whipped after a hard-fought 45-minute battle, the early leader tipped the scales at 356 pounds. It was the first blue marlin ever caught by Troy Patak of Ennis, Texas, and it was also his largest fish ever. But this die-hard freshwater angler is no novice by any means and the name his group of buddies chose—Five More Minutes—epitomizes their fanatical passion for the sport.

“I’m a die-hard fisherman, mainly for crappie, but I’ll go after anything that’s biting,” Patak says. “This is my first time fishing the Black & Blue and it’s been great so far. That marlin was a hard fight. It stayed out there what seemed like a mile and did a tail dance. My arms starting aching and I wanted to rest, but little by little I cranked the line back in. Sink care After all that I was hoping it would qualify and thank goodness it did.” The excited shouts, high-fives and hugs as the official weight was announced showed the exuberance of a team experiencing success on the Bisbee’s stage for the first time. The next weigh-in reaction also reflected that team’s persona.

Although this is also his first Black & Blue, Michael Moretti is one cool customer. The veteran big game angler from Quepos, Costa Rica, broke the ice last weekend when he brought the winning fish, a 399-pound black marlin, to the scales in the Los Cabos Offshore. But as he made his way through the crowd Wednesday afternoon, marlin in tow, videographer Rich Christensen kept peppering him with questions. Moretti remained tight-lipped. It was only after his blue marlin was hoisted aloft and officially credited with a weight of 327 pounds did he open تجربتي مع الكركم لحب الشباب up and even then the tall Tico was soft-spoken and giving credit to his celebrating crew.

“In a tournament, I don’t want to jinx us,” he explained. “We thought the weight was going to be close and it was. So that’s why I didn’t want to speculate beforehand. But this is a total team effort and my crew deserves all the attention.” Moretti’s boat, a 57 Spencer, is named Tranquilo, by the way.

Even though the bulk of the 121-boat fleet blasted into the Pacific Ocean after a booming fireworks start this morning, breezy conditions made for some sloppy seas. That didn’t stop 11 other boats from releasing blue marlin, although all were singles. hair Under the Black & Blue format, only blue and black marlin count for release points. And qualifying fish in those two categories must weigh at least 300 pounds to make the scoreboard.

The competition resumes again at 8 a.m. Thursday. Will these two teams stay on top or will other players like Fat Farmers, Hot Rod, Wild Hooker, Fastball or Betty Boop earn the spotlight? At the richest fishing tournament in the world with a collection of names like these, anything is possible.