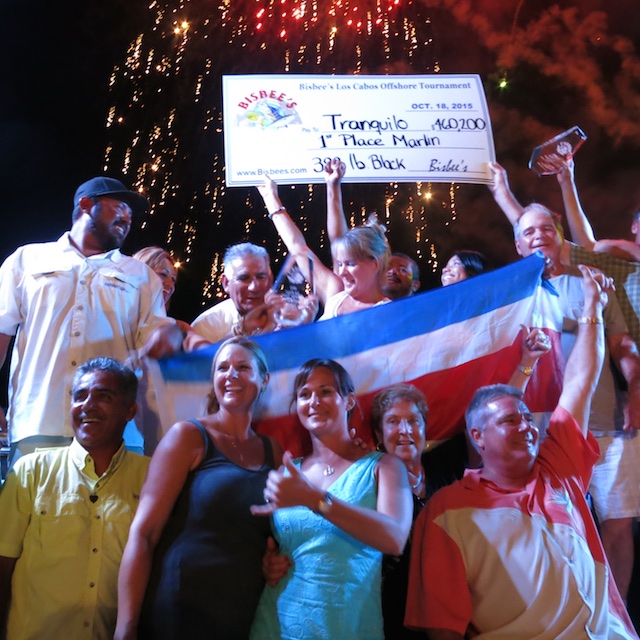 The 2015 Los Cabos Offshore Tournament was one for the record books, literally. With an all-time high of 95 boats, an overall purse of $629,300 and top dollars to the winning boat, this “warm-up” for the Bisbee’s Black & Blue has certainly come into its own.

Angler Michael Moretti and his Costa Rican team aboard Tranquilo were the big winners by virtue of the only qualifying marlin, a 399-pound black, caught on Saturday. Victor Julio is the Tranquilo’s skipper. That catch earned $460,200 as the heaviest marlin to sweep all jackpot entries.

“I’m just very happy for my team,” Moretti said after the celebratory fireworks faded behind the awards stage at the Baja Cantina Beach Club. “This is awesome.”

Sea Fever and angler Christopher Altbaum also earned a hefty payday after boating the largest tuna, a 238-pound yellowfin. In addition to the top fish in the tuna game fish division, it also captured the second day jackpot for a total of $104,500.

The biggest tuna for Saturday—165.1 pounds—won angler Scott Oliver, Capt. Shawn Baker and Team Salsa $64,600. No qualifying dorado were weighed, so that money was split into the tuna prizes.

Twelve-year-old Kaleb Richardson put on an angling clinic for his elders by releasing 12 striped marlin over the two days. That effort earned Expedition honors as the top release boat. Uno Mas was second with four stripers and five sailfish, followed by For The Gold with five striped and one blue marlin released. The release teams won trophies and Costa sunglasses for their tallies.

A total of 139 striped marlin, 22 blue marlin, 16 sailfish and one black were caught by the 632 anglers competing. الشعر Fifteen yellowfin were also boated. Two weighed blue marlin were disqualified after failing to meet the 300-pound minimum. None of those boated fish went to waste, however.

Feeding Los Cabos Kids, a local ministry dedicated to providing protein to underprivileged kids in the region, was the other big winner this week. Founder Donna Brnjic and volunteers including Dave and Jen Limpert collected the donated 2,144 pounds of fish, which will feed 8,576 kids in the barrios around Cabo San Lucas and San Jose. The tournament also donated a vacuum-sealer to the group.

“Our motto is changing lives one child at a time,” Jen Limpert says. “We sincerely thank the Bisbee family for allowing us to feed thousands of kids.” The group will also be manning a booth during the Black & Blue to collect more fish donations.

“Well, it’s definitely time to finally drop the ‘Little Bisbees’ tag line,” says LCO Director Wayne Bisbee. تجربتي مع الكركم لحب الشباب “The Los Cabos Offshore Tournament truly is a world-class event and has earned that honor this week. We had some great fish, gave away record amounts of money and helped a wonderful charity in the process. It really has been a winning combo.”