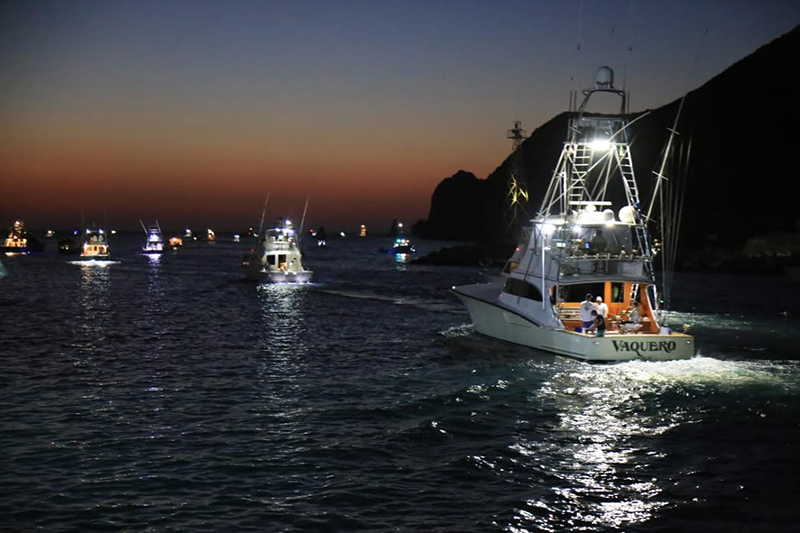 During the final five minutes of the count down to the shotgun start of Day Two, the team on Sporty Game – Steve Kaiser, angler; George Landrum, angler; Captain and angler, Dan Lewis; Filipe Robles, angler; Carlos Rodriguez, mate; and Jacob Rodriguez, angler – was hoping that no other team in across the board caught a qualifying billfish the second day. If not, they could win as much as a $1 MILLION for both dailies for their $22,500 entry.

The other 127 teams were sharing their frustration from the first day’s action, mixed with the anticipation of the one monster fish that might still be out there for them.

As the flares streaked across the Baja sky that final morning, most of the fleet headed up into the Sea of Cortez toward the Gordo Bank where most of the tuna and billfish had come on Day One.

The boats themselves maintained social distance and then some as they scoured the high spots in search of billfish, yellowfin, or perhaps dorado as they reveled in the freedom felt of being on their boats in the contained environment they controlled. The voice behind VHF radio control, Axel Valdez, observed, “The numbers of incoming “Hookup” calls were consistent on both days.”

This year, the first billfish of the day arrived before the weigh station had opened at 2:00 p.m. at the API Pier. The incoming team had dedicated their catch to the kids at the orphanage as a tribute to their longtime fishing buddy, surfer, and friend, Donnie Lovett, “Blackfin Donnie.”

Lovett had lived in Cabo for 37 years and he had won the Bisbee in 2005 on Pez Espada with Captain Jeff Elless.

That year, just as crewman Lovett was putting the line into the outrigger, fish on! it was jerked from his fingers.  And teammate Peter Hoertig fought and

landed the black marlin in a little over an hour.

That year they won a purse of $1,348,440.00, qualifying them for the prestigious unofficial “Millionaire Club” that currently has 19 members.

The team and crew on the 40’Blackfin Donnie – Captain Shaun Baker, angler; Mike Gilligan, angler; Neil Hannewyk, III, angler; Mate, Pedro Orozco, angler; and Captain Eric Smith, angler – had known Lovett for over 15 years.  They had fished many times with him – long ago at the East Cape when he first began getting sick, and then when cancer got him last August at 70-years old. He was considered a great friend of all onboard.

The next arrival was the Pocket Aces with a 424-pound black marlin that was caught by Ángel Salvatierra, a local fisherman who was part of a unique two father and son team. It took Angel 50 minutes using live bait with a circle hook as he was seeking redemption from last year when Pocket Aces brought a non-qualifier to the scale.

Next was the Champy Team with angler Arturo De La Rosa and his 159-pound yellowfin tuna, the heaviest yellowfin tuna thus far on Day Two.

Next to the scales were several non-qualifying dorado whose weight fell far short of the 30-pound minimum. As one of the anglers observed, “It beats a day at work!”

However, there was a flurry of yellowfin tuna that although qualified, was not large enough to displace the Champy team.

That is until the Knot Workin! arrived several hours later to the scales. The final visitor arrived with a 177-pound tuna that knocked the Champy Team out of contention for the day.

The outcome of day two was as follows:

The checks and trophies for the winning teams were presented at Baja Contina Sunday afternoon.

The 40th annual Bisbee Black & Blue runs October 20 – 24 in Cabo in the pursuit of giant black and blue marlin for MILLIONS of DOLLARS in prize money beginning with Registration on Tuesday followed by three intense days of tournament competition. Live scoring can be found on all of the tournaments by going to Bisbees.com and clicking on the CatchStat Live Scoring link. The virtual Captains Meeting can be found on the same link.