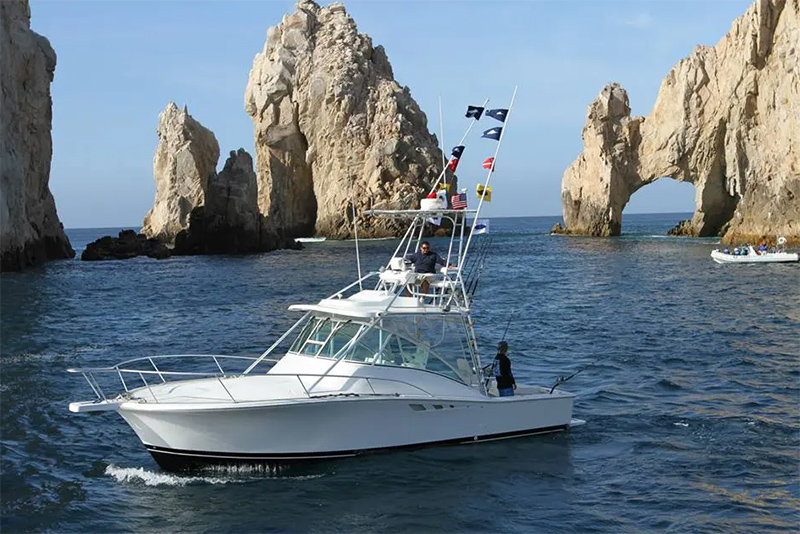 Rebecca Ehrenberg, Pisces Sportfishing just posted the following
"I just hung up the phone with local and well respected Captain Javi Abaroa of the 34’ Luhrs “Whatta Journey”, with team “5 More minutes” onboard. They hooked up to a Blue Marlin at 12:38 PM today and fought their fish for over 5 hours!!

Two fish were brought to the scales that did not qualify and this was the last boat hooked up, all lines out, and if they made it happen, the marlin would turn them into Millionaires...

A series of complications, beginning with their reel, an 80 Avet that was losing pressure. Their set up had been working beautifully until then, a 100# mono, 120# braid and 530# leader... The angler, Everett Rusher, worked the fish very well, despite it being his first tournament, Javi said. But their small fighting chair couldn’t take it. The base snapped close to the 5 hour mark. Still, they brought the fish to within 12 feet from the boat but they were just out of reach of the leader.

As luck would have it, the fish died on them. The job got even harder with dead weight and no chair; even with the motivation of some big money guaranteed if that fish got on that boat, they just couldn’t make it happen.
After 5.5 hours, their line broke and their chances at the monies disappeared into the depths. Captain Javi was very disappointed of course, but when asked he said, “No es el primero, ni es el último”, meaning, “it’s not the first or the last... we’ll try again tomorrow.” He estimated the fish at about 600-pounds.

Tomorrow just got even more intense as the biggest fish will be taking home a lot of dough with two days rolling over...

With 127 boats trolling or soaking bait for 8 hours and all they came up with were 14 released billfish. Who would have thought? Sure. There were Bisbee Family tournaments when no fish were brought to the scale. However, never as few as 14 released fish in a single day.

While its tempting to allow frustration to dominate the emotions of crews regardless of their experience. The trick is to consider the positive side. As the dailies are rolled over and right place, right time, right fish only needs one more component-a calm and collected crew that can complete the catch

On social media Captain Steve Lassley, one of the best in the game noted about yesterday. “Small Black today. I wish it was the one we had our only day prefishing....this 46’ Billfish is by far the most maneuverable boat I have driven in my life.....sick. Not fair!

So this morning back as the start line Teams once again jockeyed for position to head in a direction that would give them a chance to snatch a brass ring catching the fish that would earn them the payoff of a lifetime.

Some thought it, others murmured it and just shouted it outloud at the top of their voice!

SHUT UP AND DEAL

The Bisbee’s Fish & Wildlife Conservation Fund in the past 7 years has undertaken some extraordinary projects and made a remarkable contribution to everyone of them.

In an on-site raffle, we will also have 60 Custom Bisbee’s 40Th Anniversary Logo Lures that were donated by Eat Me Lures available on the Black & Blue’s registration day for the first 60 $1000 donors! Each of these 60 donors will also have a chance to win a trifecta of free base-entries into our 2021 East Cape Offshore, Los Cabos Offshore AND the Black & Blue. The winner takes all!!!

Silent On-Line Auction is LIVE and you don’t have to be in Cabo to get great prizes! START BIDDING NOW

A late update from the Bisbee Weigh Station is there were no qualifyers brought in today. BIG DAY COMING TOMORRW