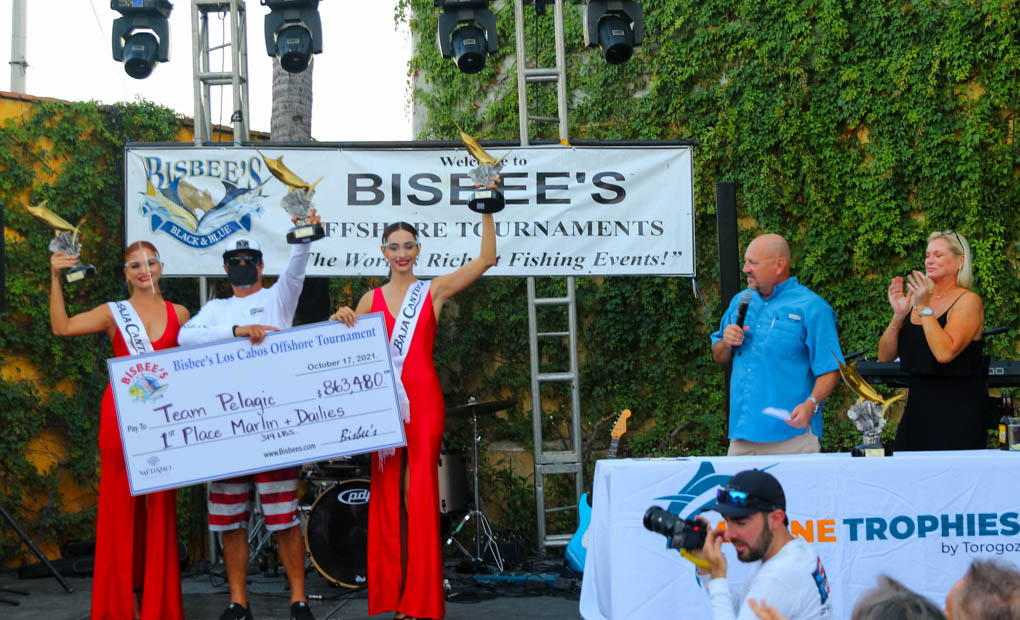 For the THIRD time in its 23-year history, the Bisbee LCO total awards equaled over a MILLION DOLLARS as well as increasing to 186 TEAMS breaking last years record of 122. Also of note is that 60+TEAMS were FIRST TIMERS in competition for the total payout of $1,961,600.

Congratulations also to Team Chinito Bonito II with David Martinez, angler and Captain, Davis Ahn, angler, Francisco Arturo, angler, and Leonel Martinez, angler, for landing the only qualifying yellowfin tuna of the tournament caught on Day One, weighing in at 179-pounds. On Two, these guys had a large tuna that they fought for over four hours (they thought it must have been near the 300-pound mark)! Unfortunately, they lost the fish. However, with no other qualifiers that day, their big tuna on Day One secured them a huge check totaling  $305,920.

Captain Greg Distefano aboard El Suertudo dropped by the Bisbee headquarters to turn is his release videos even though in an unusual turn of event he wasn’t even in contention.  Shaking his head side to side he volunteered that it was the slowest two days he had experienced. Adding that they few shots they had were few and far between.

Adding to that refrain was Captain Steve Lassley who posted the following on Facebook.

“Never in my career...slightly technical here. I was NW of a spot I was trying to get to that was straight South of me. The current was running so hard I had to run Northeast to go South at 60-degrees. When I got to the spot, I should have been going over 2 knots forward. I was going 1.8-knots backwards. Not typical at all….”

"We had two Pisces Boats – on the Listo 48' Viking, Captain Ray Romero and Mate Yiki Winkler had a fish on from around 4 p.m. until after lines out, so, they had the last fish hooked up for the day.

They fought it for an hour and twenty minutes before they had it beside the boat. They were flying a kite, looking for yellowfin tuna, when they spotted a school of porpoise. The wind changed, and they began taking down their kite. Just as they put out two lures, they had a strike. The angler grabbed the rod, pumped and ground until the blue marlin was alongside the boat. Although the team knew that there had been a 319-pound blue marlin weighed in, their fish only taped out at about 290 pounds, though it was a very fat fish. According to the Captain, since it was only Day One, they decided to release it.  If it had been Day Two, they would have boated it and taken their chances. However, they did have another opportunity the following day, but they only 'guestimated' that fish to be 200 pounds.

Another Pisces fleet boat, the "C Rod," had a blue weighing approximately 280-pounds the second day.

David Garcia of CatchStat offered a cautionary word to the old and new teams of the impact of violating the release rules and its consequences on a team’s scoring.

He stated, “While we watched a release video submitted, we saw a crew member come out with a gaff. We couldn’t see the fish, but we watched the gaff swing as they gaffed it.

“After team brought the fish around to the back, someone explained to the Team Captain that a gaffed fish COULD NOT be released after it was boated. If it was, it was NOT a qualifier. So the team let it go, resulting in zero points for the catch plus a deduction of 285 penalty points based on the new rules. Their total score became minus 625 points for the fish.

“The consequences of that gaffed fish meant if the team caught another billfish with the negative points applied, the fish would need to weigh over 900 pounds to score any points.

“Under the old rules, the points would have been deducted from only the largest billfish category as well, if the team was in across the board.”

Under the old rules the points would have been deducted from only the largest billfish category as well, if the Team was in across the board.

Under the new rules the negative points would be applied to next billfish they caught during the rest of the tournament in the largest billfish category as well as any other jackpot categories. (see below)

If a team weighs a non-qualifying marlin that is 285 lbs. to 299 lbs. their negative points will only affect the “Overall Awards” categories. Their “Daily Jackpot” categories amounts will not be affected. This penalty method is exactly as the points deductions have been structured in all previous years. Basically, teams are getting a “15 lb. grace” before affecting the larger Daily Jackpot prizes.

For fish weighing 284 lbs. or less, there is no change to the currently published rules in the in the 2021 tournament rules magazine. This means that both the “Overall Awards” AND “Daily Jackpot” categories will be affected for fish weighed of this size. This is exactly as described in the currently published rule #18 under the General Tournament Rules.