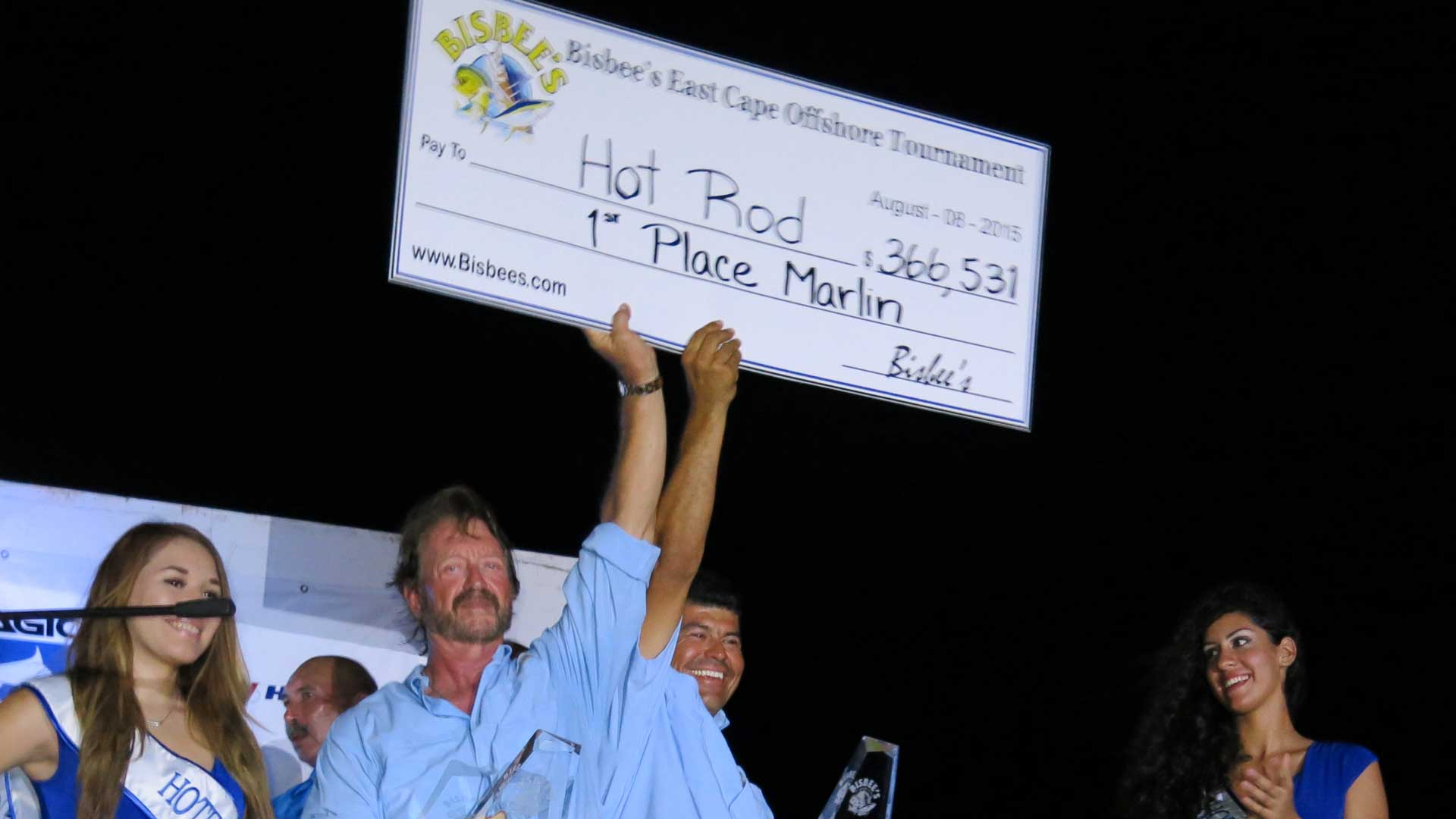 John Peelman and Team Hot Rod know what it takes to win. The Fresno, California angler and his veteran crew adapted to difficult conditions and brought the winning fish to the scales Friday afternoon to earn top honors in the 2015 Bisbee’s East Cape Offshore Tournament. The 409-pound blue marlin, caught on a live skipjack bridled on the downrigger 70 feet below the hot surface, was worth $366,531. The total purse in this year’s 61-boat event, which was sponsored by Pelagic High Performance Offshore Gear, was nearly $508,000.

“I brought my boat down to Cabo in 2008 and I’ve been fishing the Bisbee’s tournaments every year since 2009. تجربتي مع الكركم لحب الشباب We fished this one last year but missed the Cabo tournaments because of hurricane damage to the boat, so this is a very gratifying win,” Peelman says.

Hot Rod is a 40 Cabo Flybridge, with Capt. Eriberto Orozco at the helm, mate Ramiro Gonzalez in the ‘pit and Bob Garavello the second angler. The winning fish was boated after a fight lasting just over an hour off San Luis.

Team Fisherman is taking home the second-largest check of the week. Agustin Pino whipped a 170.3-pound yellowfin that was worth $60,470 for the Day Three Daily and overall tuna prize money. Capt. Jose Cosio is the Fisherman’s captain.

The two other tuna daily jackpots, which paid out $34,850 each, were split between Team Tres Amigos (Erick Esteves, 57.6-pound yellowfin) and Team North Star (Gonzalo Castillo, 156-pound yellowfin). Both fish were caught on squid. Surprisingly, no dorado were caught this week, so that jackpot money rolled into each day’s tuna payout.

Angler Randy Wickward landed the second-heaviest and only other qualifying marlin, a 389-pound black, aboard the panga Ardilla Ciega. It paid out $11,049. Tragically, just after the fish was gaffed, Wickward suffered a massive heart attack and passed away on the boat. His team mates, Captains Gregorio Liera and Sergio Cota, were not able to revive him. Wickward did realize his dream of winning the tournament, however, since his fish was leading at the time. The tournament extends its deepest condolences to the Wickward family and friends.

A total of 62 billfish were caught by the 61 boats fishing the 2015 ECO, including 40 blue marlin, 13 stripers, five sailfish and four blacks. Ten yellowfin tuna were also brought to the scales.

“El Niño made for some tough fishing conditions this week, but in typical Bisbee’s tournament fashion our anglers rallied at the end and brought us some respectable fish,” said Director Wayne Bisbee. “I’d like to thank everyone for participating and especially our host, the Valdez family and the Hotel Buena Vista Beach Resort, as well Pelagic, oilboomUSA, Costa, National Car Rental, اونيلا Sevenstar, American Fishing Wire/HI-SEAS and the rest of our other great sponsors. It’s been another fun week here at the East Cape and now it’s time to get ready for our big anniversary celebration in October.”

The East Cape Offshore Tournament is the first of three Bisbee’s Baja events. Up next is the Los Cabos Offshore from October 16-18, followed by the 35th Anniversary of the Bisbee’s Black & Blue Marlin Tournament from October 20-24. The LCO is the same format as East Cape, with marlin, tuna and dorado categories. The Black and Blue, the richest sport-fishing contest in the world, is limited solely to black and blue marlin. The expected field of 125+ boats, with hundreds of anglers and more than a dozen countries represented, will be vying for more than $2 million in overall prize money.