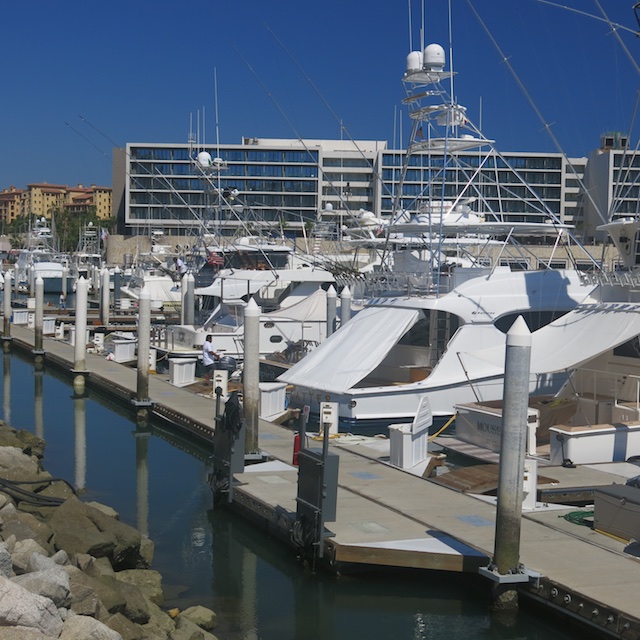 The ‘Little Bisbee's” is little no more. The Los Cabos Offshore Tournament, long known as the diminutive warm-up for the Black & Blue, has announced its presence with authority. One hundred and eight boats competing for more than $773,000 in prize money proves that, thank you very much. And if there was still any lingering doubt, a look at the team rosters confirms the popularity of this combo billfish/game fish format. Take Juan Barraga and his crew, for example.

Barraga, a Cabo San Lucas resident since he was six years old, has been fishing the LCO for the past five years. skin This time he’s joined by family members and local radio station Cabo Mil aboard Hook Up, a 38 Blackfin, in the quest to put fish on the dock.

“We’re going to go for the tuna and dorado. That’s what I love to do,” Barraga said before Friday’s captains’ meeting at the Puerto Paraiso Mall. “We can put a tuna on the scales, but it’s going to take a 250-pounder at least to win.” In hedging his bet, however, Barraga and his team mates entered the $500 marlin optional jack pot. He was a little worried about the impending full moon, though.

“Sunday is going to be tough, so we’d better catch our winning fish tomorrow,” he said without hesitation.

Although they would welcome a winning payout, Catherine Carr and Marilyn Atkins of Texas are fishing for another purpose this weekend. They have dedicated their efforts to their long-time captain, Danny Bosque of Cabo San Lucas, who passed away recently. Bosque skippered Never Give Up, a 35 Cabo.

“This year we’re giving it our all for Danny,” Carr, of Medina, Texas, explained. “He was our captain and this year we’re competing in his honor. But the LCO is always a fun event. The people are great and Wayne and his family do so much for the Cabo community. تقوية We always enjoy coming, but this one has even more added meaning.”

Fishing begins at 8 a.m. Saturday and ends at 5 p.m. Qualifying species include marlin weighing more than 300 pounds, tuna topping 40 pounds and dorado exceeding 30 pounds. A big percentage of the fleet is also entered in the optional billfish release division.

The scales open at 2 p.m. at the Puerto Paraiso Mall and the public is welcome to watch the weigh-ins. Sponsor booths, food and beverage vendors and the typical Bisbee’s carnival atmosphere make the Los Cabos Offshore one to remember. Even it does still have that undeserved “little” stigma.