The past three days of Bisbee’s Black & Blue Tournament fishing were challenging experiences for the 218 Teams! Putting it into perspective, according to CatchStat, there were a total of 70 billfish reported, including 4 blacks, 60 blues, and 6 stripes. Remarkedly only 3 qualifiers were brought to the scale, and sixty-six were released. Only one non-qualifier arrived at the scale! It was a remarkable statement of all the Team members’ judgment about the size of their fish when there were such huge sums of money on the line. 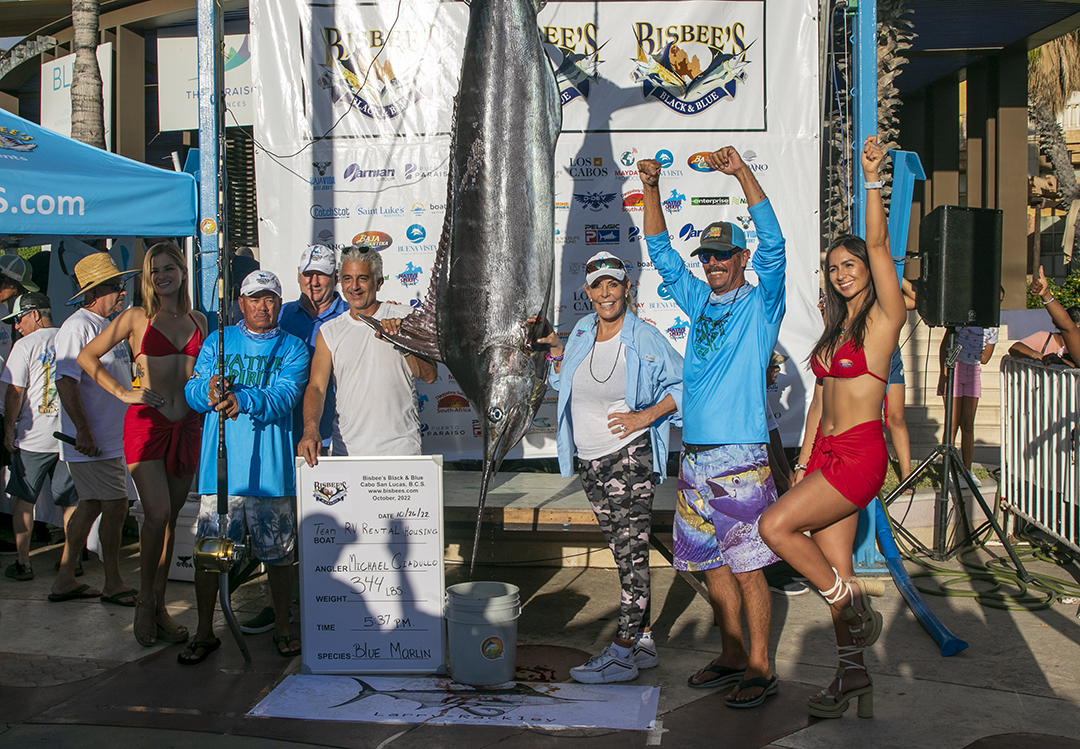 On Wednesday, the first Qualifier at the Black & Blue was a 344-pound Blue Marlin caught by Michael Ciardullo in Team RV Rentals aboard “Vida Loca.” 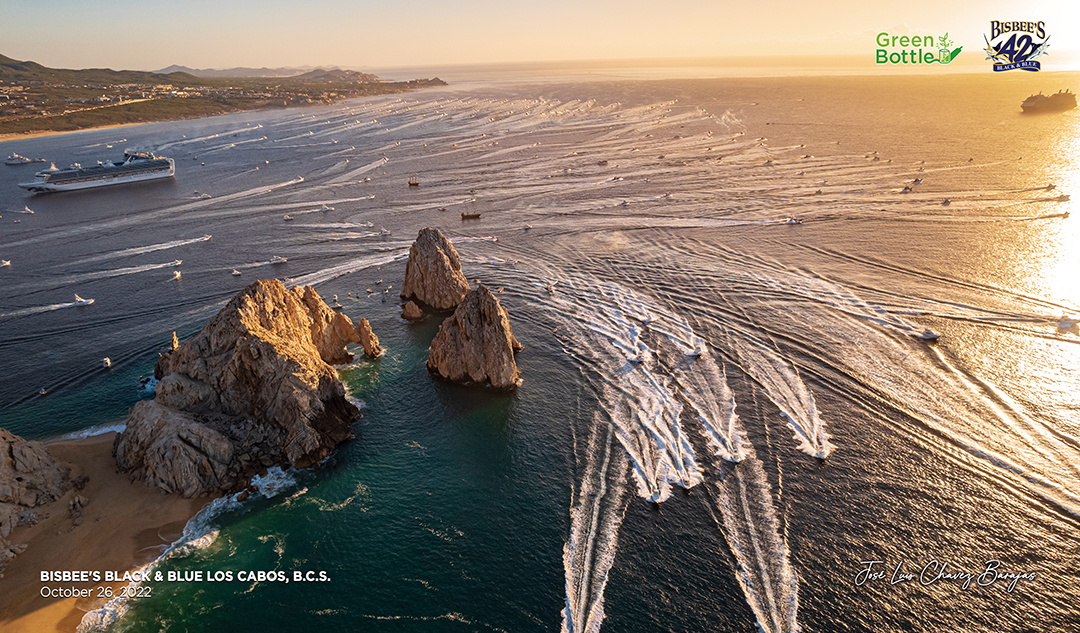 On Thursday, the second day, the fleet demonstrated that there were no known hotspots as they peeled off in three distinctly different directions.

When lines out were announced at 5:00 pm, it seemed clear that conditions had deteriorated. This was quickly confirmed by the total count reflected on CatchStat, a dismal 22 billfish, consisting of one black marlin and 19 blue marlin – all released for the day. 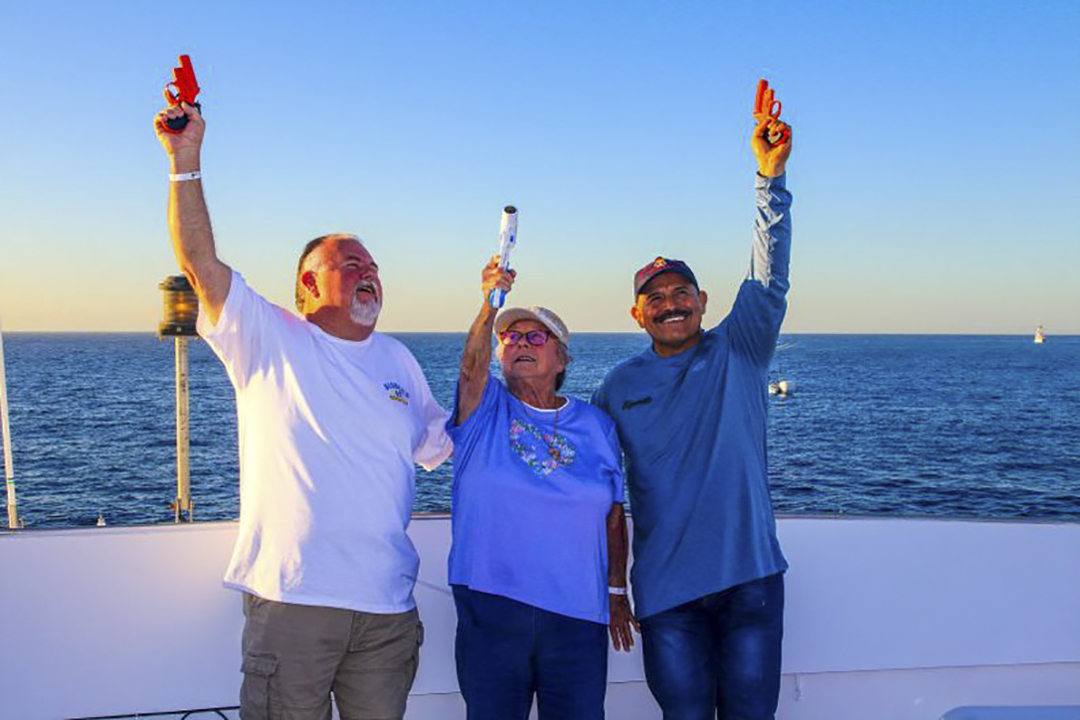 On the Third and final day, the fleet hoped that conditions would improve with the help of what was considered a lucky omen for the fleet – the distinguished Team firing the start gun – Robert Bisbee, Aina Bisbee, and Comandante Juan Carbajal.

Once again, Teams chose a variety of directions in search of a qualifying billfish, searching for THE one that would be worth something north of $1,000,000. 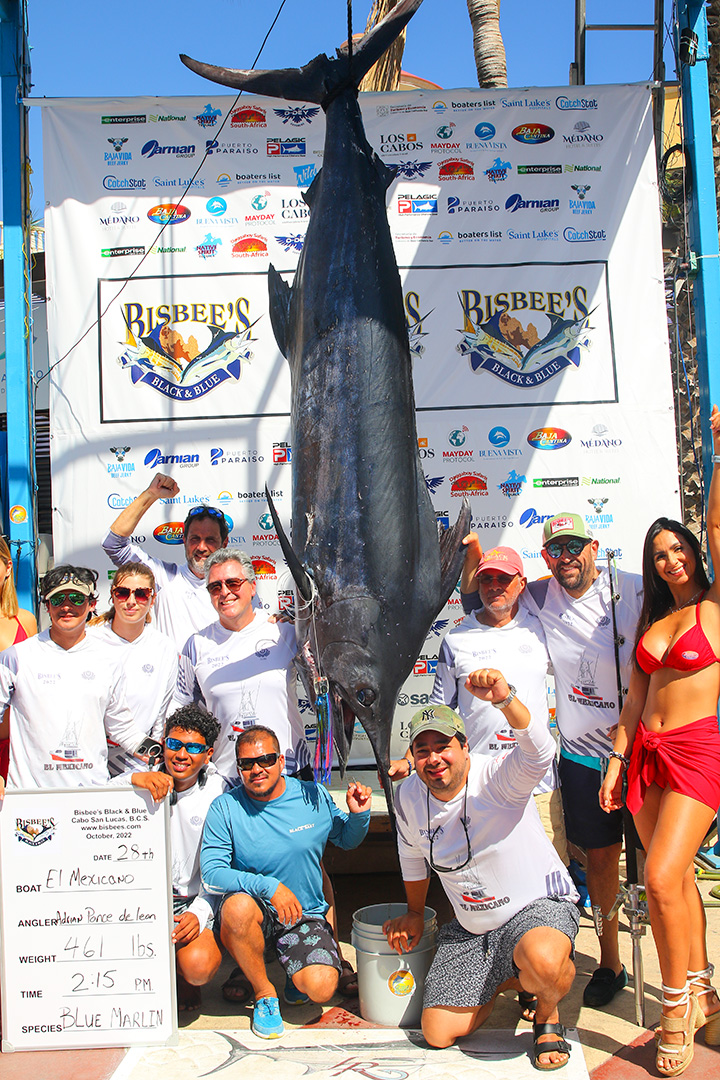 It was late morning when a large blue marlin snatched a lure behind the EL MEXICANO and headed for the horizon. Adrian Ponce de Leon, member of Team El Mexicano, on the 63’ Hatteras, wrestled the 80-pound trolling rod out of the holder and hung on as the line disappeared from the spool. The big fish refused to give up for a solid 2 hours and 15 minutes.

Their cheering was nothing compared to the whooping and hollering back at the Weigh Station as the Bisbee Team members high-fived and waited for their arrival.

It was chaos when they arrived! The Puerto Paraiso Mall was jammed with locals and tourists as the news spread around the Marina.

The crowd parted as the crew labored at pushing the fish into the Weigh Station. Announcer Wayne Bisbee said, “It looks like a qualifier!”  Then he corrected himself. “It is much more than just a qualifier!!!”

The final weight confirmed that it was the largest fish brought to the scale thus far and would be worth an extraordinary amount of money. It weighed 461 pounds. 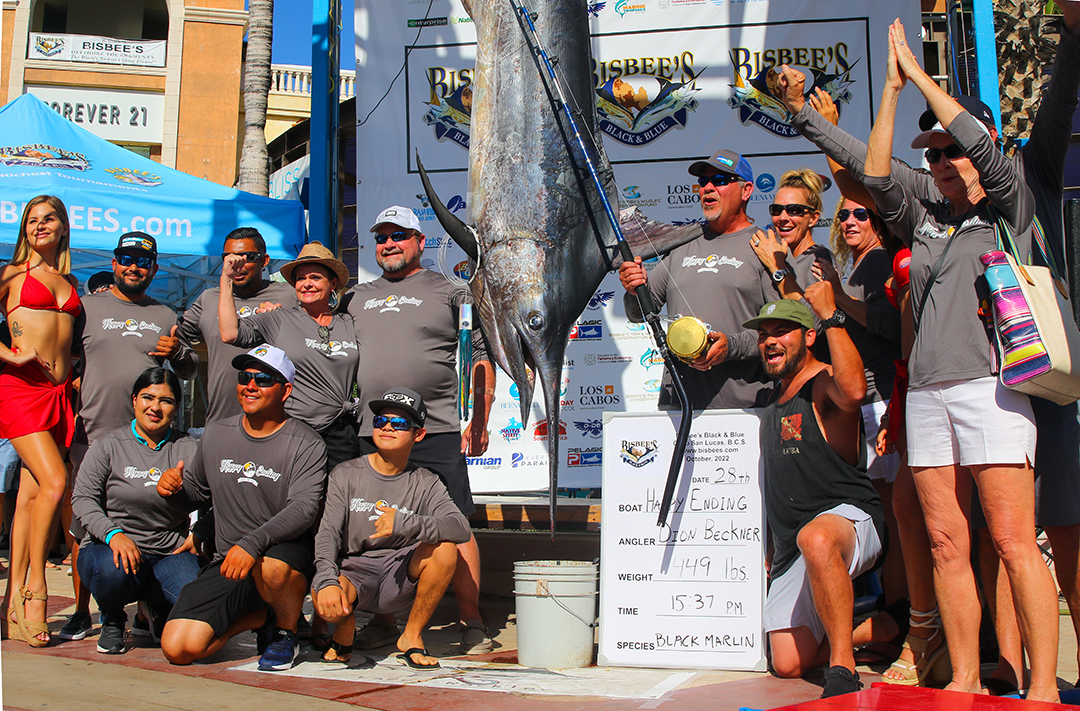 For some, the fish looked like it might outweigh the blue brought in earlier by Team El Mexicano. As the crew hoisted the big fish, spectators debated how much it weighed. When Jack Teschel called out the weight at 449-pounds, some were disappointed that it fell short of the earlier fish. However, Dion Beckner laughed, knowing his winnings were above $1,000,000. He mused, “It’s like my boat’s name; it’s a “Happy Ending!”

Tonight, should be a fun party!!! We should have a couple of millionaires at least???