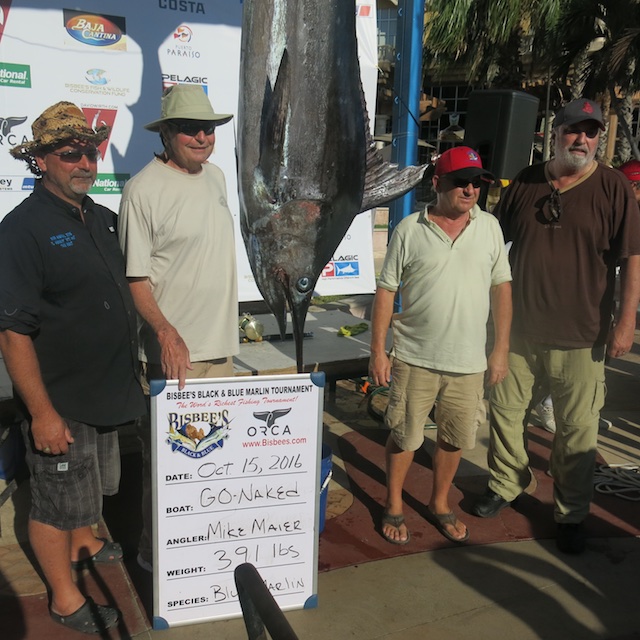 The first day of the 2016 Bisbee’s Los Cabos Offshore Tournament started with a big bang and that doesn’t even count the 8 a.m. flare start that sent 108 boats racing off in search of big fish and even bigger prize money. A total of more than $773,000 is at stake in this two-day event. By the time the scales closed 12 hours later, six marlin had been hoisted aloft, along with three qualifying yellowfin tuna. Marlin must weigh at least 300 pounds, while tuna have a 40-pound minimum.

Danny Chiodini and the Santana Team were the first to crack the leaderboard with a 312-pound black marlin, hooked near the Gordo Bank in the Sea of Cortez on a live tuna. A short while later, Deno Merziotis and Team NiceRide topped that with a 366-pound blue. That fish ate a purple and black plunger lure and was whipped after a 40-minute fight.

“We were out towards the 1150 line and the conditions were great,” says team mate Breck Girod. “There was very little bait but good seas and only a few fish. We found one of them.”

The marlin party was temporarily interrupted when angler Rich Oliver and Salsa brought a hefty yellowfin to scales at the Puerto Paraiso Mall. The 194-pounder was whipped after it swallowed an orange and brown Sevenstrand plunger. شجرة الشاي The 35-minute fight on 100-pound test line resulted in Oliver’s largest tuna ever.

Team Octopusi, fishing on Pangalisa brought a 311-pound black marlin in by late afternoon. Gonzolo Castilla was on the rod for that capture.

James Rosenwald on North Star/Zorro thought he had hooked a big hammerhead shark when his fish ate a big chunk of squid. He tightened the drag down on the 80-pound line only to quickly realize a giant yellowfin was attached to the other end. After a lengthy fight, he finally boated the 224-pound tuna, which earned top daily honors in the game fish division.

Canadian Mike Maier has been coming to Cabo for several years and fishing the Bisbee’s for the past five. تجربتي مع الكركم لحب الشباب But he had never been to the scales before today. That changed when he and Team Go Naked outlasted a 391-pound blue marlin that inhaled a caballito live bait.

“That was my biggest marlin ever and this is my first time weighing a fish after all these years, so I’m definitely pumped,” he said after the weight was announced to the gathered crowd.

Two more marlin were also weighed on Saturday and both fish were fooled by plunger lures. Trenton Twamley on Bull Rider scored a 325-pound blue while Chris Vincent on Go Deeper added a 333-pounder just before the scales closed after a fight lasting several hours.

Live bait and tuna tubes are the standard tactics for most boats fishing these fertile waters, where currents from the Pacific Ocean and Sea of Cortez mix in a target-rich environment. But for the first day of the LCO at least, الشعر التالف  the skirt chasers topped the list. The full moon may be the reason for this unusual trend. Or it could be the fish are following presidential politics. If there are any pants suit teasers in the spreads tomorrow, we’ll definitely know for sure.