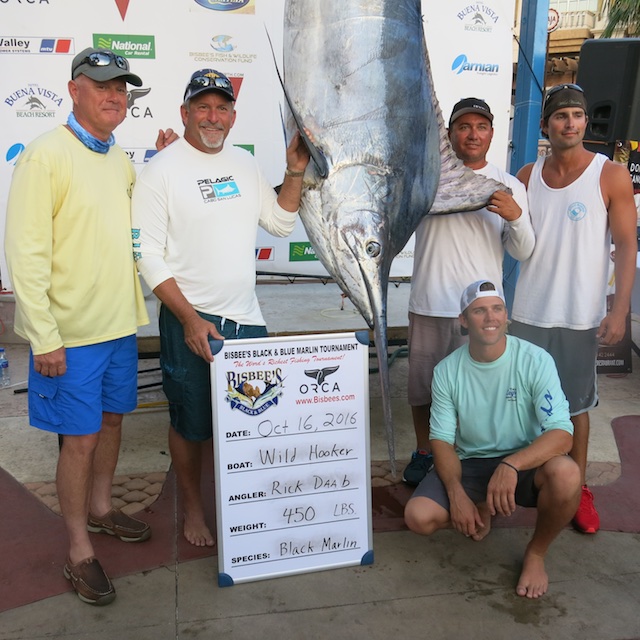 The normal association of the word avalanche is massive walls of snow pummeling down a frozen mountain pass. Or in the case of arid climates like Baja California Sur, pebbles triggering rocks triggering boulders in a raucous cavalcade until it all comes to a pulverized rest in the arroyo far below.

But avalanches can happen in waves too, like the rapid-fire procession of entries carted to the scales in the waning hours of the 2016 LCO late Sunday afternoon. Between fins and slime, sweat and blood intermingled among the crush of the admiring crowd, this particular avalanche continued right up until the final deadline. And in typical Bisbee’s fashion, the best was saved for last.

It started off as a teaser. Nacho Bancalar and Team Choyero got on the board with a 328-pound blue marlin that was caught near the Golden Gate after a 35-minute fight. The crew had the fish to the leader six times before finally sinking the gaff. skin Once again, their lucky Black Bart Blue Marlin Breakfast lure did the trick.

Up next was Go Deeper 60 in an attempt to top Saturday night’s last hour heroics (the team weighed a qualifying marlin in the final 15 minutes). Angler Steve McMananan picked the perfect time to hook his largest tuna ever, a 188-pound stud. The yellowfin was caught in the same grid—B-2—as the previous day’s marlin. The tuna strike was the only one all day and the team made the most of the opportunity by boating that fish on 80-pound line.

If it weren’t for bad luck, Team Tejas wouldn’t have any at all. Owner MIke Darden and his crew had two rods break before finally boating a 193-pound fattie yellowfin after a four-hour battle. The fish broke two feet off the end of a second 7-foot conventional rod before it was ultimately whipped on the 42 Yellowfin. Because two different rods were used, however, the fish was disqualified.

Patrick Goodwin and his team on Tracy Ann also dealt with tackle failures after a 171-pound yellowfin snapped a heavy rod like a match stick. Goodwin somehow managed to crank the fish in anyway.

Francisco Rochin and his fellow team mates aboard Go Deeper coaxed the only فوائد فيتامين سي للبشرة qualifying dorado to the gaff, a 32.4-pounder. Dorado must weigh at least 30 pounds to qualify while the tuna miminum is 40 pounds.

Thanks to earlier reports of a boated marlin on Tournament Control radio, the anticipation grew as Wild Hooker backed up to the weigh dock. The wait was justified, as that black marlin turned out to be the largest fish overall, topping the scales at 450 pounds. ماسك Rick Daab of Cypress, Texas, was on the rod to wind in the stocky billfish.

“The fish ate a live skipjack tuna while we were working up north on the Pacific side,” said Capt. Shane Obrien of Kona, Hawaii, after the weight was announced. “It was flat calm out there and just beautiful. It was a great day of fishing.”

The last rumble came just as the scales were closing. Angler Brian Parker and his team aboard Sin Duda somehow managed to whip a Mini-Cooper-sized tuna, a yellowfin that registered 283 pounds. It too also turned out to be the largest game fish for the 2016 contest.

The awards banquet was held Sunday evening at the elegant Maria Corona Restaurant in old town Cabo. More than $772,000 in overall prize money would be doled out to the 108 teams, proving yet again that avalanches are more than just snow and rock slides.