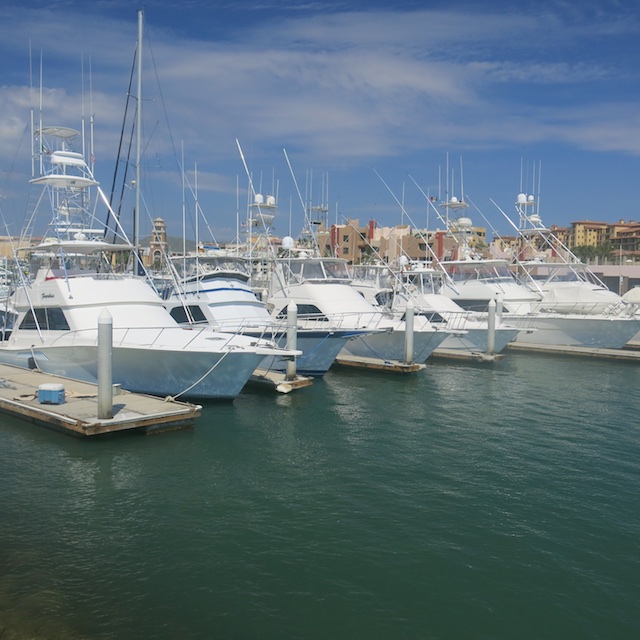 Sport-fishing will never rival the sheer magnitude of team sports like football and baseball. But it does have a loyal following of participants and fans, nonetheless. And for the next week the most passionate group of anglers in the world are gathered at the tip of the Baja Peninsula with one goal in mind: Win the coveted Bisbee’s Black & Blue Marlin Tournament and earn fame, fortune and glory.

Presented by Orca Coolers, the 36th annual Black & Blue got underway Tuesday with its usual zany pageantry. Between sponsor booths and a giant billfish sculpture, folk dances and music, color guards and an Elvis sighting, 121 teams paid their entry fees and made final preparations. At stake? More than $3.5 million in prize money for the ones that bet on themselves and catch the largest blue or black marlin.

“This is the Super Bowl of sport-fishing,” says Pelagic Gear’s Colin Sarfeh. “All the best teams in the world are assembled in one spot for the chance to earn millions of dollars. We’ve been supporting this event for more than a dozen years because of that and because of all the Bisbee family does for Cabo San Lucas. We wouldn’t miss it.”

For 23 years Ron Pasco hasn’t missed it either, citing the competition, camaraderie and hospitality as the biggest reasons why he returns every year.

“This is the most fun I’ve ever had with my clothes on,” the jovial Pasco says with a wink and hearty chuckle.

Newcomers are drawn to the ultimate big-game contest as well. Besides new international teams, several sponsors are here for the first time too, including Orca Coolers, which donated a semi-truck load of B&B logo coolers and drinkware. "We're happy to be part of the Bisbee's this year," said Orca President Cliff Walker. "We make a full line of roto-molded coolers in seven sizes and 25 custom colors, plus two soft coolers and a full line of drinkware. All of our stuff fits right in with a fishing tournament so anglers can stay hydrated and keep their baits fresh. And they're all made in the USA." Valley Power Systems, the West Coast distributor for Detroit Diesel/MTU, is also on board as an inaugural Platinum Sponsor for 2016.

“We’re here to promote our engines and services,” says Chris Viramontes. “We have locations at nine California sites, including all the major harbors, plus an office in Seattle. A couple of our service technicians are here this week so if for some reason a boat has a problem, we can resolve it and get them back in the game. So far, the kick-off has been absolutely awesome and we’re looking forward to the rest of the week.”

Dan Lewis, owner of Sporty Game and a past B&B Champion, also enjoys the camaraderie and competition the tournament offers.

“It’s the greatest,” he says. “There’s a lot of money on the line, so you have to do a good job of finding the fish. We were 100 yards away from Wild Hooker when they caught the winning fish in the LCO. So you just have to gamble and get to work at it.”

Capt. Mike Hennessy, another former champion from Kona, Hawaii, is motivated for different reasons. “A lot of people come to the Black & Blue for the money. I come to beat the best teams in the world. That’s what is fun for me. There’s nothing better than a short corner marlin bite and we’re going to kick their ass.”

So will Hennessy & Company live up to the bravado? Or will a dark horse team emerge? It all starts Wednesday morning with the 8 a.m. flare start off El Arco as the Richest Tournament in Sport-fishing gets underway.