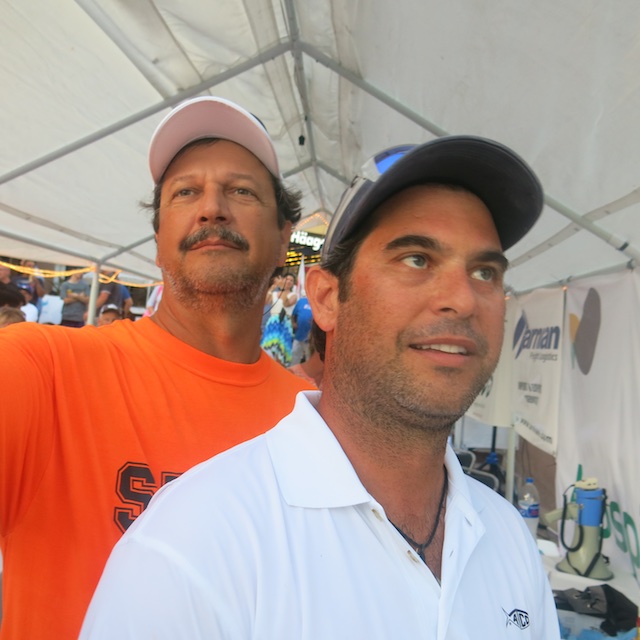 It wasn’t the biggest marlin Julio Fernandez has ever caught. And it wasn’t the hardest fighting fish, either. But the black marlin he landed Thursday morning in the 2016 Bisbee’s Black & Blue Marlin Jackpot Tournament will be the most memorable, without a doubt. Catching a fish worth close to $2 million dollars tends to stand out, regardless.

After a fight lasting about one hour, Fernandez and his veteran team aboard Quitena boated the 534-pound black marlin with Capt. Rich Hamilton at the helm. The team is entered across the board in all optional categories except the Chupacabra Challenge. So with no qualifying fish the first day, the jackpots roll over, earning Quitena the biggest score yet for the 2016 contest. But earlier in the day, that didn’t look to be the case.

Past big money winner Chip Wagner, fishing aboard Bob Patton’s Viking, Fastball, wound in a qualifying 304-pound blue and made it to the scales not long after they opened. Because the boat was entered in the optional Chupacabra Division, that fish would have earned approximately $2.3 million if it was the sole daily qualifier. With Quitena’s fish, however, it will only take two day’s worth of prize money in that optional $20,000 division. A $320,000 payout is still a nice day on the water.

“We were in the salon when we got a knockdown,” Wagner explained after the fish was weighed. “I jumped in the chair and put that 130 to work. The fish ripped off a bunch of line and got tail-wrapped but we got it in. It’s all good right now, real good.”

“Because it was tail-wrapped we didn’t have to gaff it, so that probably saved us a couple pounds,” Patton added. Patton is part of the Guggenheim Baseball Management Group that owns the Los Angeles Dodgers, which are currently playing in the National League Championship Series against the Chicago Cubs. The Dodgers lost 10-2 Wednesday night.

“This is definitely a team effort,” Patton said. “I wish my baseball team had won last night, but they’ll have to take care of business themselves. You can see where my priorities are.”

Angler Gilles Asunsolo and his Mexico City family and buddy team aboard Drakkar, a 65 Hatteras, boated the other qualifying fish on Thursday. The 349-pound blue was hooked on the Pacific side and landed after a 40-minute fight. Drakkar’s fish was fooled by a pink/silver Braid plunger lure.

Flora T II, Strictly Business and BajaMark all weighed marlin on Thursday, yet none met the 300-pound minimum. The teams earn negative points as a result.

Last year’s big winner, Tranquilo, continues to pull away from the pack in the release division. The Costa Rican team has 2,100 points, followed by El Suertudo with 1,200. Five boats are tied with 900 points based on time.

The final day of the 2016 Black & Blue kicks off Friday morning at 8 a.m. Is there another jackpot marlin swimming around out there? We shall see. Julio & Company already found theirs.