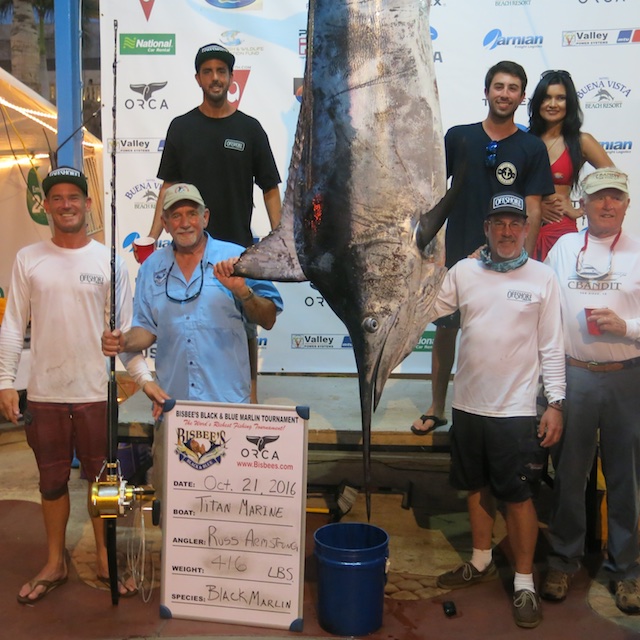 It was a fitting end to the 36th annual Bisbee’s Black & Blue Marlin Jackpot Tournament. The SoCal team aboard C-Bandit was the last to the scales Friday night with a solid contender definitely in tow. Russ Armstrong was on the rod when a black marlin ate a live 12-pound yellowfin tuna near Vinorama right at noon. Even though it stayed down at first, Armstrong suspected it was a good fish. As he applied more drag, the black came alive and started leaping out of the water 200 feet behind the transom.

“As soon as it did that, I told everyone it was a qualifier,” Armstrong explained. “The fight took about an hour and because we knew it was well over the minimum, we decided to work our way back in. This was my first time fishing with this crew and they were exceptional.”

Armstrong has been fishing the B&B every year since the late 1980s and has known tournament founder Bob Bisbee Senior for years, dating back to when Bisbee owned the fuel dock in Newport Beach, California, and supplied most of the sport-fishing boats headed down the Baja peninsula. Armstrong is also a past B&B Champion.

C-Bandit’s fish, which registered 416 pounds on the scales, vaulted the team into second-place overall, trailing only Quiteña’s 534-pound black weighed on Thursday.

It was also a reunion of sorts for Team Five More Minutes. Angler Troy Patak wound in his 344-pound blue marlin after a 48-minute fight. It was exactly one year ago on the same day that the team weighed a money fish (356 blue) in the 2015 contest. This time they were fishing around Margaritas in Grid C-4.

“We were all almost sleeping, it was so slow,” said Robert Hulsey, also from Southern California. “Everyone was awake in a second when that fish hit though and now everyone is happy, just like last year. Things happen for a reason.”

The bite was definitely on Friday as Axel Valdez of Tournament Control tried to keep track of all the hook-up reports. Scales coordinator Bert Merritt and Weigh Master Jack Teschel managed to keep things flowing smoothly as a parade of marlin were carted into position. Nine other marlin were weighed on the last day, but all of them failed to meet the 300-pound minimum.

The 2016 awards ceremony gets underway Saturday evening at the Puerto Paraiso Mall in downtown Cabo San Lucas. A cocktail party and silent auction starts at 5:30 at the Common Table Restaurant. The auction will benefit the Bisbee’s Fish & Wildlife Conservation Fund’s support of billfish tagging programs and scholarships for local deserving marine science high school students. All tournament participants and sponsors are invited to attend both functions.