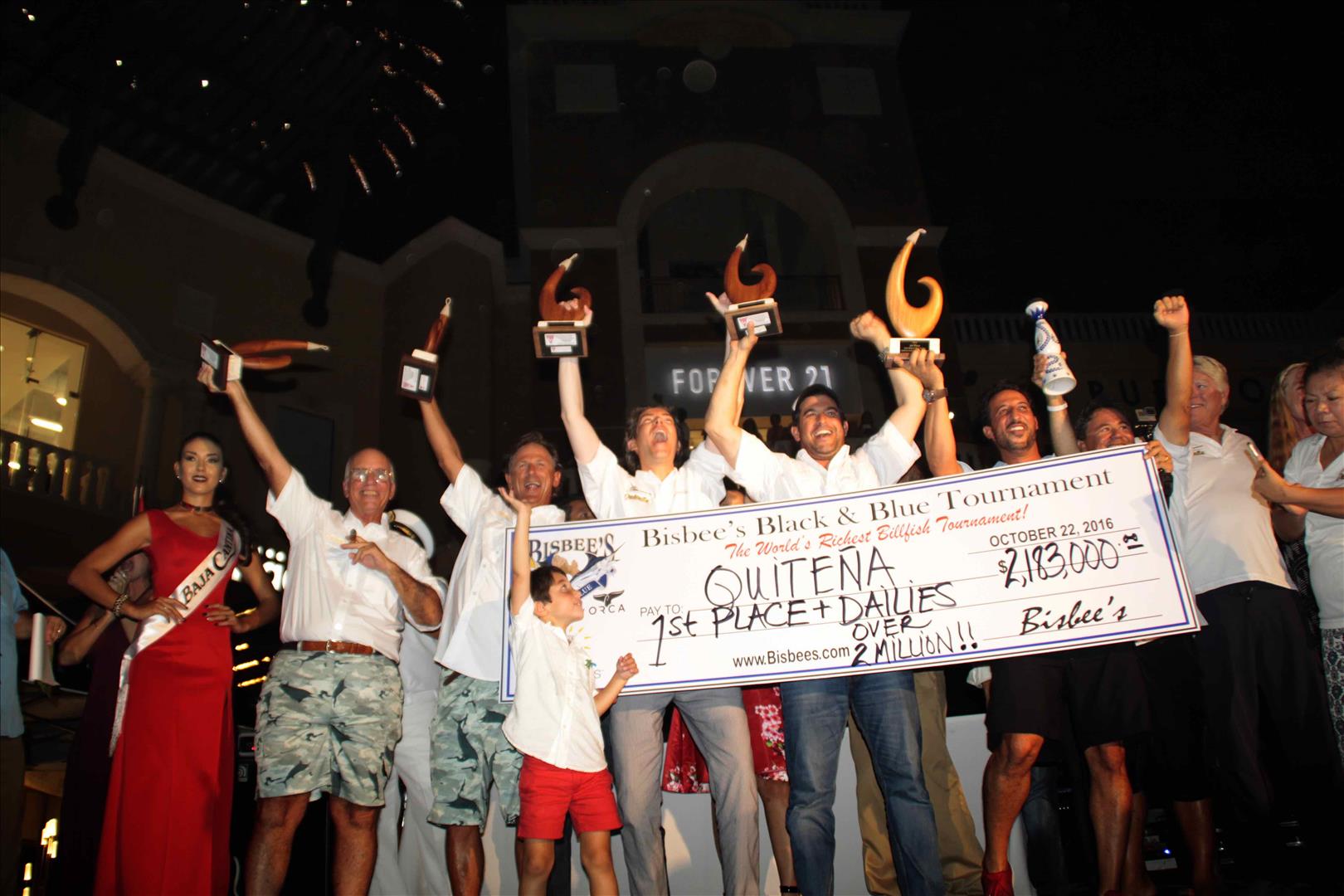 There are countless ways to gauge success in today’s society. From presidential polls to college football rankings, friends, followers and likes to stocks and commodities values, all measure degrees of achievement, standings and wealth. كيف اهتم بوجهي The benchmark for the Bisbee’s Black & Blue Marlin Jackpot Tournament, the richest sport-fishing contest in the world and presented this year by Orca Coolers, is the unofficial Pacifico Index. By all accounts the 2016 edition was a resounding success with an overall purse of $3,511,900 at stake for the 121 boats entered.

On the big stage in front of the Puerto Paraiso Mall Saturday night, Julio Fernandez and his Quiteña Team claimed the biggest share, a $2,183,000 payout, after landing the largest fish of the week. Fernandez outlasted a 534-pound black marlin on Thursday, and that catch swept the top team, jackpot, captain and all but one daily jackpot categories. Fernandez is from Tampico, Mexico and Quiteña (62 Viking) is led by Capt. Rich Hamilton.

Veteran B&B participant Russ Armstrong, Capt. Frank D’Anna and the crew aboard C-Bandit (75 Titan Marine) captured second-place honors with a 416-pound black brought to the scales on Friday. That fish was worth $685,000, counting the optional jackpot winnings.

Gilles Asunsolo of Mexico City and his family/buddy team scored big while fishing on Drakkar, a 65 Hatteras. His 349-pound blue marlin, which ate a pink/silver Braid plunger lure, earned a check worth $40,500 for third-place honors and various jackpots.

For the second year in a row, Team Five More Minutes (Luhrs) made the trek to the B&B awards stage. This time it was to pick up a $10,800 check for fourth-place honors. The team brought a 344-pound blue to the scales Friday, the only other qualifier for the day besides C-Bandit’s.

Fastball (82 Viking) owner Bobby Patton and his pal Chip Wagner combined to record a 304-pound blue, worth $487,200 as the fifth-place tournament and the rollover jackpot winner in the daily $20,000 Chupacabra Challenge division. This optional category had eight teams competing for the winner-take-all prize. After the check was presented, Patton generously donated $10,000 each to the Los Cabos Children’s Foundation and the Bisbee’s Fish & Wildlife Conservation Fund. Chris Erickson of Cabo won the $10,000 Conservation Fund raffle (cash stuffed in an Orca Pod cooler), which he promptly donated to the children’s foundation as well.

Last year’s big winner, Tranquilo (57 Spencer), easily earned top team honors in the Release Division, اقنعة تبييض البشرة led by Capt. Victor Julio. Those efforts resulted in a payout of $68,510. El Suertudo was the second-best release team ($23,715), followed by Team Bibi ($13,175). Blue and black marlin under 300 pounds, plus striped marlin and Pacific sailfish caught and successfully released, earned points based on time. For the week, a total of 234 billfish were caught by the 121-boat fleet, including 175 blue marlin, nine blacks, 56 stripers and three Pacific sailfish.

“It’s been a killer week,” Tournament Director Wayne Bisbee said after all the camera flashes and fireworks honor 50 bursts had faded into the night. “We had some quality fish come to the scales, plenty of the usual drama and we gave away an armored-car’s worth of money. I’d like to thank our nearly 1,000 anglers from around iphone 13 pro max the globe that participated and to all our fantastic sponsors who make all this craziness possible redmi note 11 pro. I hope to see everyone here again next October 24-28, 2017, for our 37th season.”