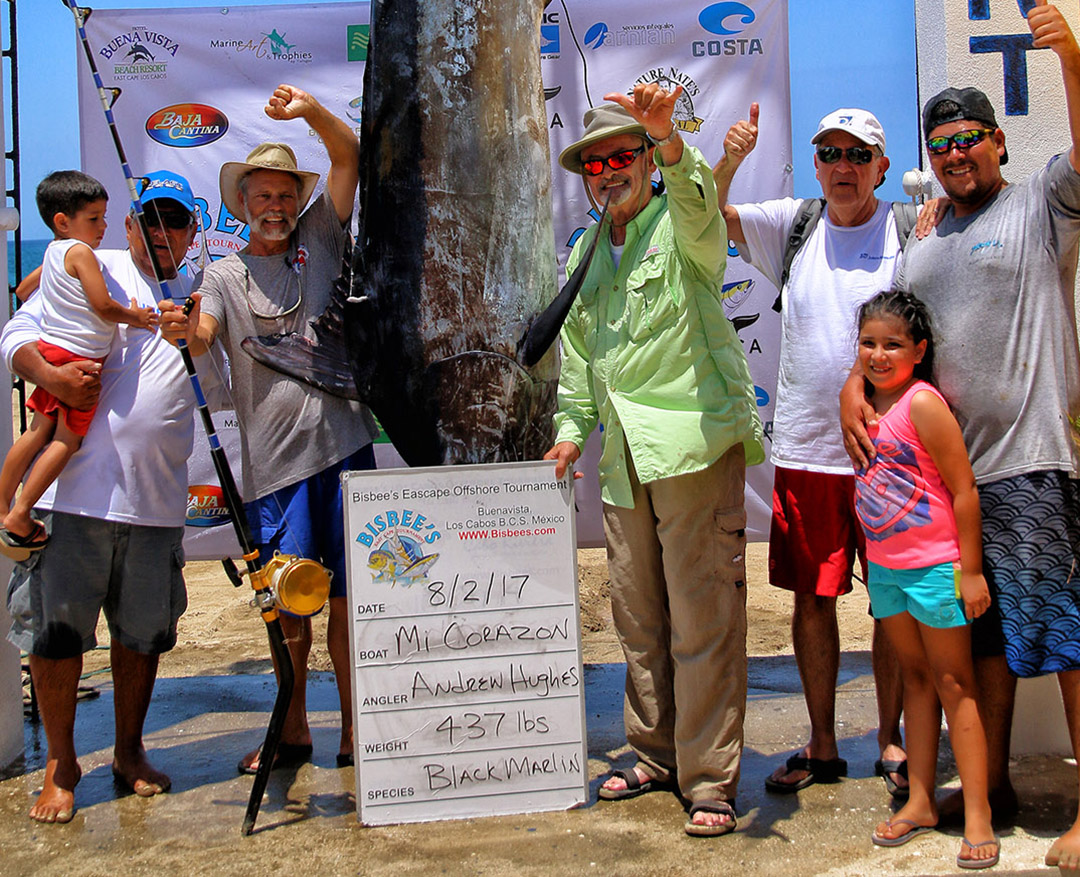 Wayne turned to Trisha as they stepped aboard the boat for the traditional flare gun start. Gazing at the flat calm Sea of Cortez, he whispered, “I have a feeling this is going to be an exciting one!”

Before the Committee Boat had returned and unloaded at the pier the first morning of the first day of the tournament, Axel Valdez of Buenavista Beach Resort, serving as East Cape Offshore Tournament Control, was already fielding incoming hookup reports.

As the weigh-station crew scrambled to be sure everything was ready that first day, Valdez had already alerted them that there had been eight hookups and two fish were headed for the scales –arrivals were expected before 9 a.m.

Borracho y Amigos arrived a few minutes before 9 a.m. and angler Rodolf Legue with his 309-pound blue marlin kicked off the tournament with the initial qualifier.  During the same hour, the first qualifying yellowfin tuna was on board and heading to shore.

As the two crews whooped and hollered, drowning out the sounds of camera shutters clicking, Wayne Bisbee confided, “This is the first time in the history of the ECO that all the jackpots were covered in the first couple of hours.”  Little did he know, but by the time for “lines out,” there would be four qualifying billfish brought to the weigh station:

The hard luck story of the day was Team Red Hot.  They lost one fish only to quickly hook and land a second that was light by 7-pounds of tying with Mi Corazon; Quintana added that they had also released one striped marlin.

In the Gamefish Division, yellowfin tuna dominated the catch:

In several instances, the tuna were hooked while fishing for skipjack to be used trolling for marlin. Mike Daniel of Team Tequila Teasers aboard Vaquera admitted that he had hooked his tuna early in the day and put it into the fish box. When he heard the weights of the tuna at weigh-in, Daniel decided to bring it to the scales.

The Pangalisa, with brothers Freddy and Gonzalo Castillo, Gonzalo Gastalo, John Dominic and angler Mike Hennessy, were also fishing bait when they hung the heaviest tuna of the day on a spinning rod. They had to chase the tough fish, hooked with no leader, for nearly two hours before landing it. Dominic was quick to remind everyone that it was his birthday week and they had won another daily, at the very least.

The first day certainly lived up to Bisbee’s early morning prediction … so welcome to Wayne’s World!

In spite of the usual hot August weather, all conditions point to continued good fishing on the second of the three-day East Cape Offshore event.