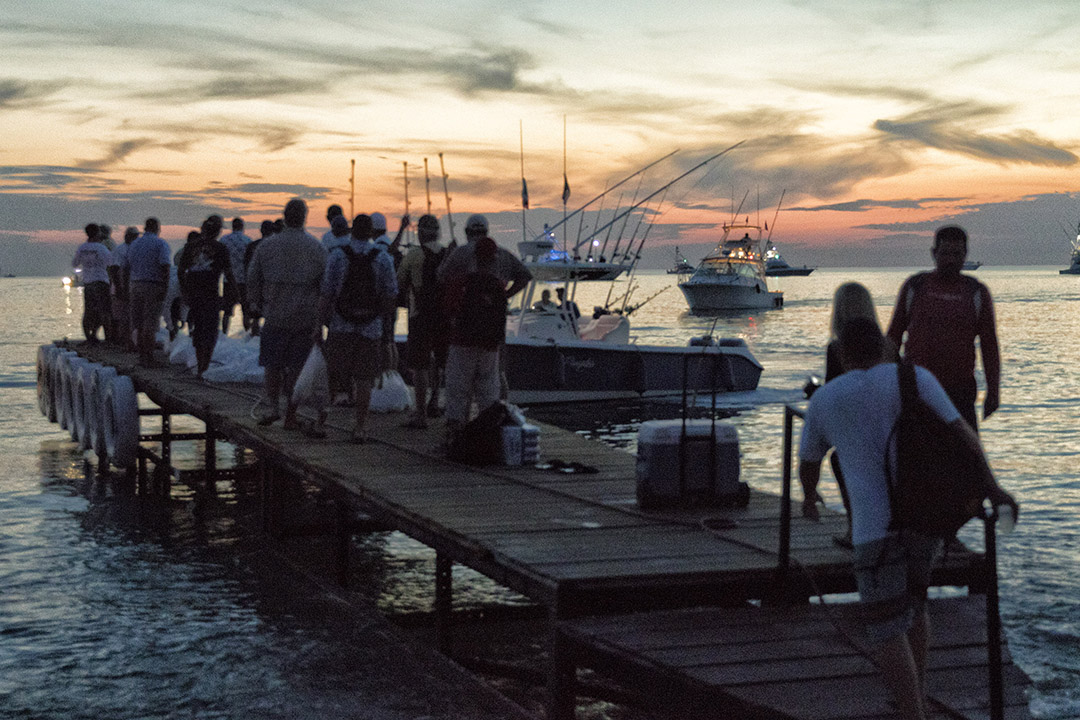 The tournament awards ceremony to hand out out eleven checks to the winning Teams totaling $590,375. Will be held on the beach overlooking the Sea of Cortez in front of the host Hotel Buenavista Beach Resort beginning at 7:00 p.m Saturday evening  (8/5/17).

As the flare signifying the start of the final day of the 2017 East Cape Offshore Tournament sailed across the blue morning sky, teams scattered in every direction, looking more like 49ers on a gold rush.

Billfish, dorado and yellowfin tuna categories – while already filled – were all still accessible. Additionally, the “dailies” for the third day were up for grabs.  It was just a matter of finding the right fish for any of the 64 teams to put themselves in the winner’s circle.

Mark Davis, with Team Camacho Loco, returned to the spot that had produced a qualifying tuna for them the preceding day and struck paydirt again with a little bit larger yellowfin, this one 61.7 pounds. That put them in the lead for the dailies in that division by 9 a.m.

However, they would be challenged several times throughout the day.  Team Awesome arrived mid-afternoon with a fish on deck that came close at 59.6 pounds. Team Scorpion and angler Michael Clifton hoped his entry would unseat the leader only to be disappointed when his YFT at 45.7 pounds fell short of both of the other fish. It was long after “lines-out” when Team Pangalisa and angler Gonzalo Castillo arrived with their catch. When the scale settled at 62.2-pounds, it was clear to everyone they had the winning fish.

John Dominic wistfully observed after the weigh-in that, “We wanted a big black marlin, but are grateful for our tuna! … so stoked to be able to fish with this team of Gonzalo and Freddy Castillo, Mike Hennessy and a big shout out to Joe Turano, owner of Pangalisa who allows us to pursue our dreams.”

In the billfish category, Team Fishing for Business led by Dean Ettinger, had a fish die that they didn’t think was a qualifier; when weighed, their fear proved to be correct.  It failed to meet the 300-pound minimum.

Later, El Bandito, with angler Kerry Harris, brought in the only other billfish to the weigh-station.  It weighed a scant six pounds over the minimum, but enough to capture one billfish daily for the final day. That was only part of their busy fishing day which included hooking an estimated 500-pound blue that got away as well as a striped marlin they released. Later, Kerry Harris confessed to anyone who would listen that this was his first time to win a tournament.

Echoing how great the fishing had been during the tournament was one of the crew members aboard Sneak Attack. “We had a Grand Slam today with three blue marlin, one striped marlin and a sailfish. Two of the blues were borderline qualifiers, accounting for the ‘Best East Cape Day’ we’ve ever had!  Our new Captain Vincente and the crew were magnificent.”

For 2017’s East Cape Offshore, the final “lines-out” has been announced and the final fish caught.