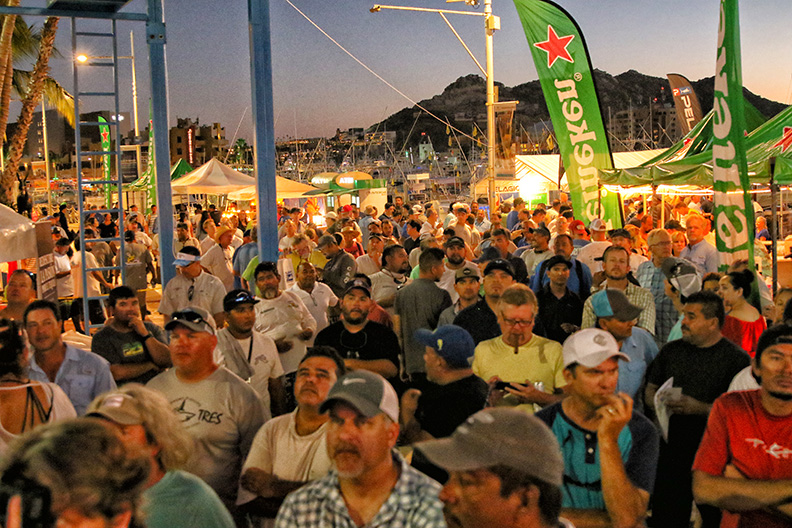 By the appointed opening time, most of the sponsor booths were ready for business. Although the sun was blistering hot, and regardless of the items offered by the sponsors, eager teams had already begun to gather seeking the shade as they waited to sign in with the registration crew.

The line grew throughout the afternoon as each team filled out their paperwork and paid their entry fees. The slow-moving line allowed the teams plenty of time to visit with old friends and introduce themselves to new participants.

Owner, Dan Lewis and his team Sporty Game, named after his 63’ Bertram, reminisced about prior wins. “It’s not about the money,” Dan mused as he and his teammates and crew waited in line, “it’s about the recognition of your peers.”  Teammates Tony Bykerk, angler; Steve Karser, angler; George Landrum; along with Captain Carlos Rodriguez and mate Jacob Rodriguez agreed.

In 2010 they had won the Daily with a 426-pound billfish, topping Tiger Spirit by only one pound which resulted in a rule change from the rounding of pounds to include the ounces.

In 2014, lightning struck again and Dan and his team joined the Bisbee Millionaire Club winning with a 337-pound billfish that they bested in 17 minutes on the last day. They earned the praise of another member of the Millionaire Club, Martha McNab of the Team Retriever who complimented them, “You did it right!”

Chupacabra’s Captain Clay Hensley, always a contender, whose Team had released five blue marlin in another tournament that had just concluded, commented, “I’ve been fishing these water for 20 years and this last tournament was one of the best days I’ve ever had!”

Ken Matney, owner of Hi-5 Custom Lures, held court in his booth as he displayed a special set of lures that had won a combined total of $4.3 million dollars for some of his “needless-to-say” extremely happy clients.

All afternoon, teams checked out the various booths, either waiting to register or just hanging out in hopes of picking up some intel on where the fish were, while tasting free samples of Clase Azul Tequila and Casa San Matias  at their popular stands, and the ever popular Baja Cantina booth where there were plenty refreshments available.

Other teams added their thoughts for the upcoming two-day tournament. “Pocket Aces” Steve Hayashi, after winning the 3rd Place Release Category last year, had two different strategies he planned to employ between the release and catch categories; while local John Dominic and his Pangalisateam were coming off a win at East Cape Offshore and they felt that their pre-fishing and local knowledge would serve his team well in the next few days.

Once teams had completed their registration, they headed to the “Fast Track” tent to pick up their swag. Team Salty and Sweet, aboard Last Onewith team members Judy Adams, angler; Marilyn Atkins, angler; San Eligio Beron Zamora, angler; Catherine Carr, angler; Ray Kuipers, angler; Willam Rosensarten; angler; Debbie Tucker, angler volunteered that they had fished the event for the past five years and if they won then they would stay for the Black & Blue to parlay their winnings for a shot into the Millionaire Club.

Well after the beginning of the Captain’s Meeting, the final team was registered as the large crowd of anglers and spectators directed their attention toward the stage. Bisbee announced that the count was at 109, though there were still folks in line.

“We are overwhelmed by the number of teams this year competing for over $800,000 in cash prizes,” Bisbee announced. “A month ago, many parts of our Bisbee extended family were devastated by horrific hurricanes, floods and major earthquakes … the natural disasters in Texas, Florida, Baja and Mexico City … and we weren’t sure what our attendance would be.  We want to congratulate every team represented here tonight. We are so pleased to see you.”

Briefly, he went over the schedule before noting the only rule change was regarding line … in order to conform with the new IGFA Rule that had been announced this year -- which basically reduced the requirement from the entire spool to 5 meters (16.5 feet) at the end of the line. And he confirmed that all boats must depart from the start line at Cape Rocks.

He concluded by updating the final tally to 114 teams with 626 participants competing for $822,450 in cash prizes. “If you had asked me thirty days ago, I never would’ve thunk it!”  He grinned.

With that, he turned over the entertainment to “Cabo Max” that had taken a break during the Team meeting and were raring to go.

They were followed by the Bisbee’s “Fireworks” that traditionally kick off the upcoming tournaments. And Bisbee added, “Fishing 2017 has been rocking since ECO at East Cape and we should have a fun week or two!”