One man one fish 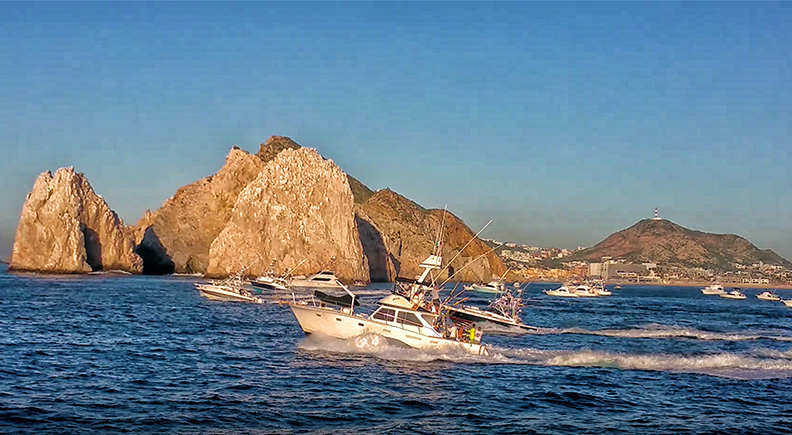 As the committee boat idled toward the rising sun, Wayne Bisbee mused, “Looks like we are going to have great weather for the tournament; the 114 teams should be pleased.”

His comment was an understatement! The first day’s fishing was a show stopper with three qualifying billfish and one yellowfin tuna brought to the scales by closing time.

The black marlin had taken the team, led by Hugo Pino, on a one hour and 13-minute chase before being boated. As it was hoisted up on the scales, the spectators and crew tried to out cheer each other when the Weighmaster declared the final weight to be 421 pounds. The owner, team and crew preened and posed with their catch as the flashes of the photographers illuminated the shadows of fish in the bright sun.

Later in the day, the team “Pescadores Sin Nombre” consisting of Barbara Arthur, Andy Beard, angler; Gary Burk, angler; Chase Roosa, angler and Bryan Whatley, angler aboard the “Sniper” arrived at the scale with a blue marlin of their own. Once again, the spectators parted as the big fish was carted to the scale. When the fish was hoisted, the crew and angler, Andy Beard, debated the weight. Would it be heavy enough to move them to the top of the leader board?

When Burt Merritt stopped the fish from swaying, Jack Teschel called out the weight, 350 pounds! The crowd gasped and cheered.

“That’s still a money fish for us,” Beard asserted, resulting in even more cheers.

However, lines out of the water was still a few hours away and there were reports that Team Ten Brothers had been hooked up since approximately 10 a.m., plus, there were several yellowfin tuna hooked up as well.

Shortly after lines out of the water, the vessel “Sea Boy” with Team PxP arrived with the first yellowfin tuna of the day. Team member Juan Baraajs had landed a yellowfin tuna in just under a half an hour that was clearly a qualifier. He was joined by his teammates Geraldo Javier, angler and Captain Carlos Peralta, angler at the scales. His yellowfin barely broke the 100-pound mark, but it was enough to place his team at the top of the leader board, much to the delight of family and friends who had heard of the catch and couldn’t resist coming to the scales to congratulate the team and celebrate their good fortune.

Still no word from “Ten Brothers” except that Jeff Kleitz remained hooked up to a monster. Finally, as the sun dropped behind the foothills, Tournament Control announced that the huge fish had been boated and “Dreamweaver” was headed for the scales with no ETA.

As the hour grew later, the Weigh Station crew questioned whether the team would make it before closing time as they waited for their arrival.

More and more spectators crowded into the Puerto Paraiso Mall as the news got out that a large fish was on its way to the scales. The crowd continued to grow at the rail overlooking the dock as “Dreamweaver”

tied up with only the tail of the big fish exposed. The crew struggled to unload the fish; finally succeeding, they placed it on the cart and moved it to the scale.

The crowd grudgingly parted, “oohing” and “aahing” at the size of the fish, but they let the team and fish make their way to the roped off scale area, closely followed by the angler, Jeff Kleitz. Photographers scurried about trying to get an early photo of the fat fish as it was hoisted up, which was accomplished amid the grunts and groans of the dock crew as they struggled to have the fish clear the ground.

Weighmaster Teschel shouted out the weight – 480 pounds! -- and the team and spectators alike erupted with glee!  Many had thought they had already witnessed the winner when “Tiger Spirit” had weighed-in earlier in the day.

The first round of photos were reserved for the angler.  “One fish…one man,” Kleitz bellowed as he and the fish were photographed by the bevy of television and press photographers gathered in front of the stage prior to the entire team joining him for more photos, including their team member, the resident Elvis impersonator.

Afterward Kleitz told his story: “The fish was hooked about 10 a.m. and we didn’t even get a good look at it in the first few hours.”

“I had it up to the boat three times,” he observed. “The blue even hit the boat one time before sounding, and another time, the line went slack and we thought I’d lost him when all of a sudden the line came tight! It had become wrapped around a handle of the reel on a rod still in its holder. We didn’t know what was happening until we spotted the puff of smoke from the line. Then when we had the fish close, we spotted the snap swivel and it was open! It took nearly eight hours before we boated what is my largest fish ever and I’m exhausted!”

As an interesting sidebar, every fish brought to the scale, regardless of whether it qualified, was filleted and donated to various Childrens’ Homes throughout Cabo with the help of the Limperts of Hope for Los Cabos. According to Jen Limpert, the fish caught on the first day was enough to provide 5,808 meals for the families and their children.

As the last fish was weighed and things finally settled down at the scale, Bisbee observed with a huge smile, “The “Los Cabos Offshore” cannot be called the “Baby Bisbee” any longer; it’s all grown up!  I can’t wait to see what happens tomorrow!”

The final results for the first day were as follows;