2017 Bisbee Offshore finishes with a flourish 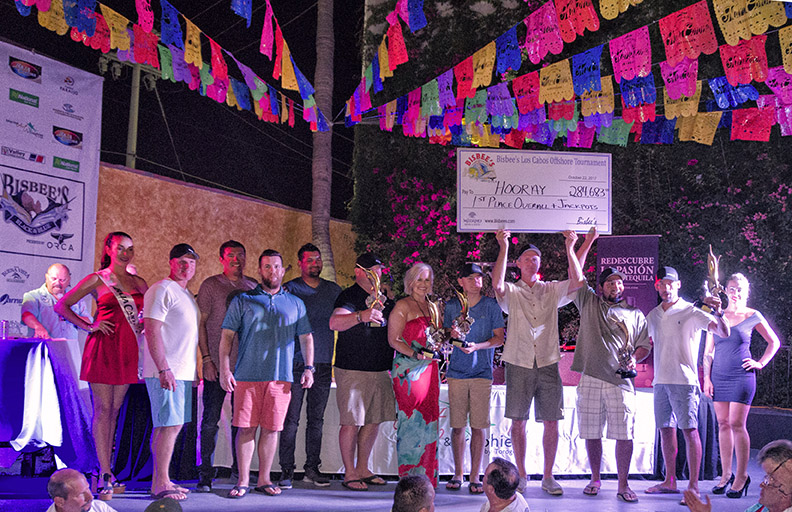 There were 671 anglers and crews consisting of 114 teams who competed in the 19th Annual Los Cabos Offshore Tournament held October 19 - 22 in Cabo San Lucas and the winners carried home $823,500 in prize money.  To quote Wayne Bisbee, “The “Los Cabos Offshore” can’t be called the “Baby Bisbee” any longer … it’s all grown up!”

Bisbee welcomed all of the team members and guests who attended the Awards Banquet held at Maria Corona.  “We were overwhelmed by the number of teams this year who competed in the tournament. A month ago, with all the natural disasters in Texas, Florida, Baja and Mexico City, many members of our Bisbee extended family were devastated by the horrific hurricanes, floods and major earthquakes. We weren’t sure what our attendance would be.”

Today, as we stand before the largest number of Teams we have ever had participate in this event, we want to congratulate every team for being here. We are so pleased to see you.” Bisbee continued.

The first day started off quickly as Team Bull Rider released a blue marlin before the first hour had even passed. By lines out at 5 p.m. there had been a total of 77 fish, either released or boated.

With a minimum of 300 pounds required to qualify in the overall Billfish Division, the top three teams brought the following to the scale:

In the Gamefish Category, minimum weight for dorado is 30 pounds and yellowfin tuna is 40 pounds to qualify:

In the Base Entry Top Release Division, the competition was intense and at the end of the day the top three teams were:

An unusual sky turned red by the rising sun greeted the fleet below on the second day as they raced toward their ‘hot spot’. Team Hooray’s Captain Francisco (Pancho) Bojorquez headed for the Gordo Bank and was rewarded with an early bite. Angler Kenneth Padgett had his blue marlin in the boat in less than an hour … actually 52 minutes. A nice way to start the day.

Meanwhile Axel Valdez at Tournament Control was swamped with a flurry of hookups and subsequent reports of boated fish which included blues and blacks in the billfish division, plus both yellowfin tuna and dorado in the gamefish division. He cautioned the Weigh Station crew to expect to get slammed when the scales opened at 3 p.m.

John Martin, aboard the Wild Catter, was the first qualifier to arrive at the scales with his 358-pound blue marlin leading a steady parade of boats throughout the afternoon.

By early evening, the list of weighed fish had reached two tuna and six billfish, including a few that didn’t qualify. Team El Torito on Gladiator arrived with angler Antonio Rohero to weigh in his 362-pound black marlin.

Several teams were still reporting that they were hooked-up after sunset, and the staff waited for those final several hours which passed by slowly. Occasional updates confirmed that Team Hooray was still fighting their fish that had been hooked up since 4:45 p.m.

Finally, the Weigh Station was informed by Valdez who confirmed that the “Hooray” had boated a big fish and were racing in at 40-knots to make it inside the IGY Marina on time.

As the 80-foot Viking Hooray tied up to the dock, the jubilant crew and anglers hugged and hi-fived one another. Pandemonium broke out at the scale as spectators, photographers and staff all jostled for a better view. When the fish had settled on the scale, weighmaster Jack Teschel called – “574-pounds! --verifying that this fish was the largest of the 2017 Bisbee Los Cabos Offshore Tournament.

This was the largest fish angler Tom Powell, Charleston, S.C., had ever landed and it had taken 3.5 hours to land it (which happens to be the longest time he had ever fought any fish). Angler Kenneth Padgett’s blue marlin, taken earlier, was a qualifier as well, weighing 315 pounds. “Hooray for Captain Pancho”!

Sunday evening at the packed patio of the popular Restaurante Maria Corona, Wayne Bisbee welcomed everyone who came to honor the eight winning teams. He also thanked the many sponsors which included Casa San Matias  who offered samples of their tequila that Captain Horace Barge, Reel Energy, had heartily endorsed earlier in the evening.

Tricia Bisbee introduced several Wounded Warriors from Chive Veterans Outdoors who had fished the tournament this year. She also introduced Jen and David Lipert of Hope for Los Cabos who collected all of the fish caught during the tournament, and then arranged to have them cleaned and filleted for distribution to Cabo Kids. They have been feeding Los Cabos Kids since 2015, and in 2016 they collected 10,400 pounds of fish, enough to provide 31,200 meals.

Following her announcements, the early bird ticket for a free entry was drawn by one of the Ten Brothers’ Team, David Snobel, aka Elvis Presley who drew Team 11 (REEL JUSTICE).

Before presenting the winning checks, Bisbee mentioned that the Capture rate for this year’s event was a remarkable 90.48%!

Next up is the final Bisbee tournament of the season, the 37th Annual Bisbee Black and Blue, October 24-28. This event primarily targets black and blue marlin weighing a minimum of 300 pounds to qualify. All other species, including striped marlin, sailfish and spearfish, are released with special prizes for the top release teams. This year’s across-the-board entry is $71,500, plus the winner-take-all “Chupacabra Challenge” of $60,000, which boosts the total entry to $131,500. The event offers entrants the possibility of becoming a member of the exclusive Bisbee Millionaire Club.