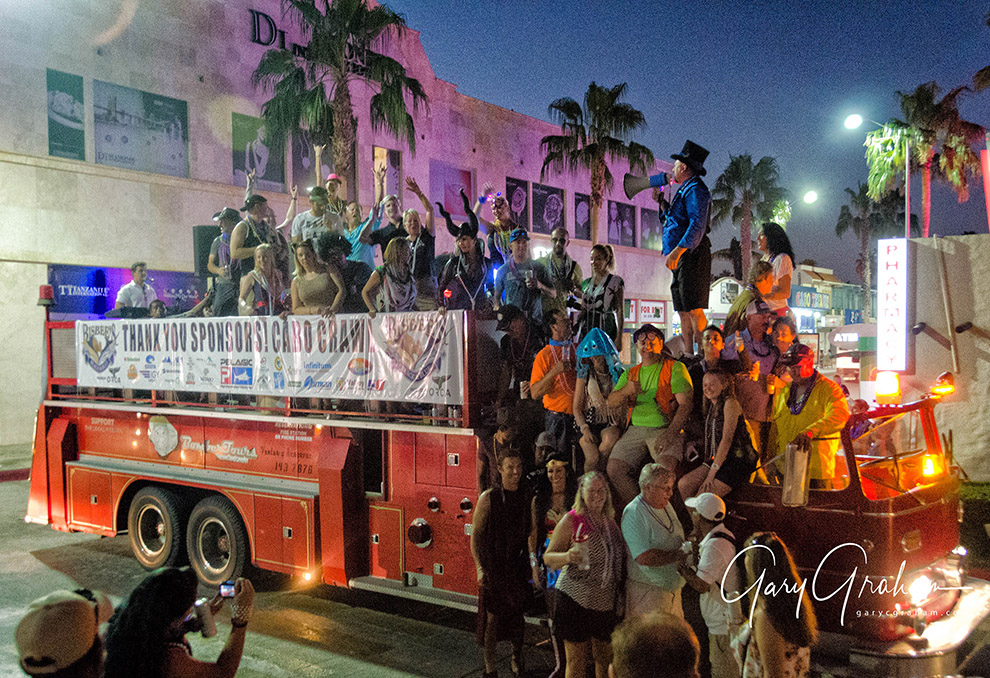 The “Bisbee Pub Crawl” has become one of the most anticipated events of the Bisbee’s entourage already. While only the second annual parade, the festive atmosphere of the Pub Crawl was infectious as everyone gathered at the Baja Cantina overlooking the IGY Marina the night before the Bisbee Black & Blue registration.

Wayne Bisbee climbed up on a chair, with microphone in hand, to welcome every participant and explain what was in store. Pointing to the tables piled high with beads he encouraged everyone to take plenty with them to throw from the Los Cabos Fire Truck as they traveled from bar to bar. Also, he advised that there was ample Heineken beer available for anyone who might be thirsty, and the folks from Casa San Matias were on hand serving shots of their finest tequila!

Costumes were encouraged but were not mandatory. However, they added to the fun as they ranged from ho-hum to risqué … some being extraordinarily creative.

Cases of beads specifically purchased and shipped down to ensure that there wasn’t a chance of running out during the party-goers’ ride down the street that passes by the Baja Cantina parking lot.

Bob Bisbee, along with his wife Aina had arrived earlier in the day and came out to greet the revelers as they departed. Somehow arrangements had been fine-tuned from last year and traffic was diverted for an hour and there would not be any distractions for Sponsors, Teams and guests, not to mention the hundreds of spectators, eager to add to their stash of beads.

Soon the entire gang headed to the local fire truck.  Departing from the Baja Cantina on the Marina and stopping along the way at; Cabo Cantina, Jungle Bar, the Giggling Marlin and Cabo Blue Bar arranged by AmazingCaboBarCrawl.com. With his megaphone in hand and a Mad Hatter stovepipe hat atop his head, Wayne Bisbee beckoned as many as could fit on the double-decked fire truck to climb aboard where Cabo Max was already playing their unique style of music that has become a regular treat during Bisbee Tournaments. Soon everyone on the truck was loaded down with beads.

As they rolled down the street, spectators snatched beads out of the air as they flew by; the Orca Coolers were a nice addition for everyone who worked up a thirst flinging beads. Along the way the truck made stops at various bars with everyone hopping off and on for more refreshments.

The hour flew by quickly as dusk turned to dark and the fire truck returned to its starting point. The entire gang posed for one final group shot, reluctant to have the night end.

Today is the beginning of the final Bisbee tournament of the season, the 37th Annual Bisbee Black and Blue, October 24-28. This event primarily targets black and blue marlin weighing a minimum of 300 pounds to qualify. All other species, including striped marlin, sailfish and spearfish, are released with special prizes for the top release teams. The Black and Blue also features a special Saturday night Award celebration with Auction, Raffle, and David Pack's "Legends Live" Charity Benefit Concert.

This year’s across-the-board entry is $71,500, plus the winner-take-all “Chupacabra Challenge” of $60,000, which boosts the total entry to $131,500. The event offers entrants the possibility of becoming a member of the exclusive Bisbee Millionaire Club.