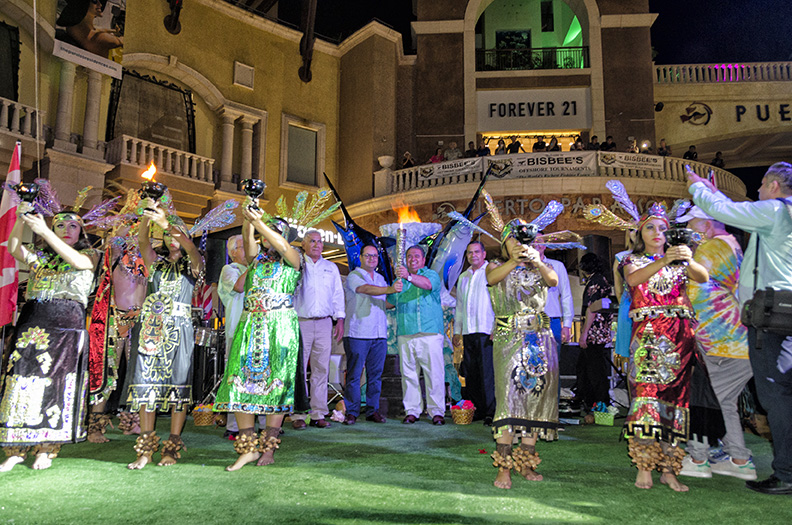 "Our entries for the Black & Blue had started off slowly this year” Tricia Bisbee began, “because of the unexpected tragic earthquakes in Mexico, and the hurricanes in Baja as well in the United States in Texas and Florida. “However,” she continued, “we are delighted that our final total number of teams is higher than expected and the prize money has actually increased."

Marco Ehrenberg of the Pisces Group Cabo predicted, “I believe the winner will be a newcomer this year and I believe the fish will be a Grander-plus. I also predict that there will be a record number of billfish released by guys like him” he continued pointing to Guy Yocum who had led his team to victory aboard “El Suertudo” in Los Cabos Offshore (LCO) the prior week.

By the time the final team had submitted their paper work and paid their entry fees, there were 120 teams registered and the cash prizes totaled $3,211,825 which was higher than it had been in 2016.

The huge pile of team bags was shrinking, and the piles of team shirts so neatly organized into sizes, were rapidly diminishing mid-afternoon when Cabo Max, the group that had been entertaining the crowd, took a break and Wayne Bisbee joined Clicerio Mercado on the stage to begin the Team Meeting.

Pete Sorensen,“Go Deeper 60”, who placed second in the LCO release division was standing by the stage and observed, “I’m privileged to be here enjoying life; we caught some fish in the LCO that weren’t qualifiers. However, this is another week, and conditions change; and I’ll tell you, there are going to be some nice fish caught in the next three days, mark my word!”

Meanwhile teams continued to wander in throughout the afternoon in small groups. Then about 6-p.m. as Bisbee had projected, the pace stepped up noticeably and the line of teams grew longer. Heineken girls manned the “Orca Coolers” offering team members a cold one while they waited their turn to complete the registration process.

Teams eyed each other with smiles as they exchanged pleasantries, all the while sizing up the competition, trying their best to get information without revealing anything that they might know.

Briefly he went over the schedule before noting the only rule change was regarding line … the new IGFA Rule that had been announced this year basically reduced the requirement from the entire spool to 5 meters (16.5 feet) at the end of the line.

Before welcoming and introducing the local, state and federal dignitaries in attendance, Bisbee noted that the agencies and governmental departments representing those groups not only have been instrumental in the success of the Bisbee tournaments for the past 37 years, but have continued to be a major part of Bisbee’s success.

Mercado welcomed a Precision Military Color Guard that presented the colors and led the local citizens in the national anthem afterward.

Next the exquisite, unique Ballet Folklórico de México, dressed in their vibrantly colored outfits, assisted, Center, Lic. Andres Cordova Urrutia, representing the State Governor, left and holding the torch is Raoul Chollet Federal Delegate to Fonatur in BCS, left Hector Montaño Cota, API Director and on the far right, Juan Perdomo From Conapesca, with the lighting of the flame in the large Marlin Torch centerpiece that dominated the center stage and will burn during the entire six days of the event.

Always a crowd pleaser, at the close of the evening the traditional ‘fireworks’ bathed the Puerto Paraiso tower in dazzling multicolored lights leaving everyone in awe of the spectacular sight as they left with a sense of camaraderie, looking forward to the first fishing day of the event.