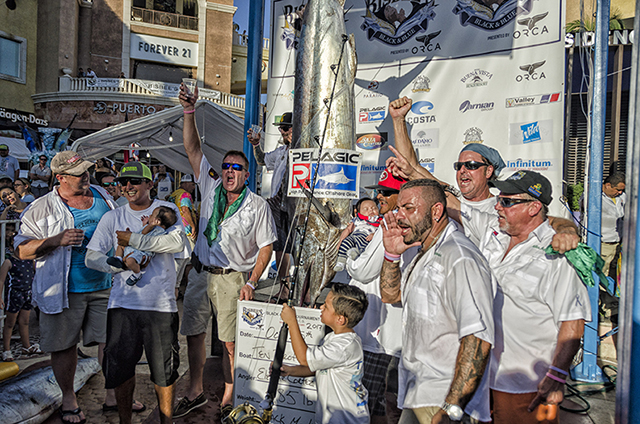 It required two boats to accommodate all of the local, state and national dignitaries in addition to the teams, guests and spectators on the first morning of the 37th Annual Bisbee Black & Blue tournament.

The boats, provided by Wild Cabo Tours, were up to the gunwales with guests eager to see the 120 teams roar off. They weren’t disappointed as the final countdown was broadcast over VHF radio at exactly 8 a.m.

Team Eugene got the party started at 8:34 a.m. after the flare gun start when RJ Kosich hooked and released the first blue marlin 11 minutes later.

First to the scale was Team Rising Sun with the event’s initial qualifying blue marlin. Scott Leonard took only 29 minutes to land his fish, a 392-pounder, to provide his team with an early lead.

Brian Pierce reported that Team Captain Chris Anderson owns the boat and tackle and that their journey had been a team effort for the past 16 years. This moment had been a long time coming.  The team had weighed a fish in 2008 that was knocked out of contention by a larger one. This was the larger of the two hooked and boated by the team.

“My boy Scotty was one cool dude in the fighting chair as the team hollered and screamed at him during the 29-minute battle. He just calmly handled his business,” Pierce continued. “We are excited, but there are still fish in the ocean; if it is meant to be it will be. I can tell you this, I couldn’t find a better crew to roll with,” he concluded.

Team Chinito Bonito was the next to arrive with another blue marlin weighing 442-pounds, securing the team top spot on the leader board … for the moment.  Team member David Ahn commented that it was his first-time fishing in the Bisbee and was the largest fish he had ever caught.  It took 28-minutes to subdue.

Next to arrive was Team Porque No with the first black marlin of the day. Team members from both Southern California and Minnesota were animated as they told how their fish had jumped … then jumped some more.  They could tell

it was a qualifier. And when the official scale rope came taut and Jack Tescal hollered out the weight of 344 pounds, the team was elated.

“See this bracelet?” pointing to his wrist Jim Purcell of Pacific Palisades, Calif., gestured, “it’s all about Karma!” The bracelet is part of a pledge to contribute a percentage of their winnings to local charities.  All they do is for the kids and Humane Society.

According to the team, Gilly hooked a blue marlin and was fighting it when a second fish, a larger marlin came up behind the transom of the Dream Weaver.  It was feeding, so Kleitz dropped back a large tuna they had bridled and the huge fish whacked it.  The monster fish greyhounded away taking a handful of jumps before sounding.  Kleitz was still suffering from the blisters he had from his winning fish in the LCO last week, so the mate Cortez boated it,

Everyone at the scale was certain that the smaller fish would still qualify; however, it missed the mark by a mere two pounds.  You could have heard a pin drop after the weight was announced. There was a penalty added in the overall category of -29 points, but not in the individual jackpots.

While the larger fish was being brought to the weigh-station, Tournament Director Wayne Bisbee commented, “What a heart breaker a couple of pounds can be; it’s impossible to cut it that close when eyeballing the fish.”

All 10 Brothers cheered-on the weigh station crew as they struggled to hoist the second fish. “Hey, we want a new Ten Brothers record” laughed one as the fish slowly settled on the rope. “Three-two-one- let’s have the weight,” begged one brother. Then, the weighmaster drawled out the official weight of 485 pounds!

The Brothers’ and the crowd’s responses were instantaneous and loud as the cheers echoed around the malecon, “Bring the Casa San Matias. We are number one … Number 1 on the first day of the B&B.  We are happy to be in the lead and Karma was ours today.”   They concluded, “One-two-three- DREAM WEAVER SPORTFISHING!” they cheered as they posed for photos for both the photo pool as well as spectators with cell phones.

Team members later explained, “We are Chicago boys who began in 2005 and in 2008 met Capt. Ramon when everything changed. We won in ’09 with Capt.  Ramon and Dream Weaver and are doing it again in 2017. We are grateful to this great crew! We are nothing without them, we are only mortals.”

Bisbee summed up the first day … “This is about the busiest Day One we’ve ever had.  Members of the Million Dollar Club Team Ten Brothers aren’t screwing around this week; they have their eyes on the prize in this, the richest tournament of its kind on planet earth.”

He concluded, “Tomorrow [Thursday] is another day and if it is anything like today it will be sensational. And once again, all of the fish caught today are going to the Hope for Los Cabos to feed the Cabo kids.”

For complete results for Day One go to Catch Stat.