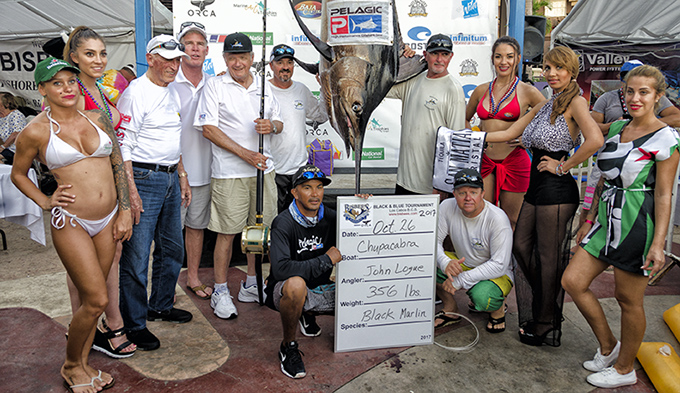 “Our morning was slow getting started, but when it began, it stayed pretty steady all day,” Jill Christiansen from Catch Stat Live Scoring observed. “The final hookup of the day was just before ‘lines-out’ at 5 p.m.,” she smiled.

Adding to that, Tournament Director Wayne Bisbee reported after the scales had closed for the evening, “This is the first time in a very long time that there were seven qualifiers weighed in and no fish failed to make the minimum weight.”

By the time scale operators Jack Tescel and Burt Merritt had opened the weigh station at 3 p.m., العناية بالبشرة there were already three boats unloading their catches.

First in line was long-time tournament participant Mark Hinkle aboard his Pocket Aces with the first black marlin of the day weighing 421 pounds.   He had landed it in less than an hour that morning.  Hinkle seemed disappointed at the weight as he had thought it would land in the 450-pound range. However, when asked what he would do if he won some cash, his reply was, “Party, of course!” When asked where he caught his black, he replied. “It’s no secret, in the middle of the fleet, where many were fishing.”

Next in was Go Deeper 60 with angler Ben Vincent’s black marlin, another “about an hour” fish. That one point per pound added 367 points to Team Go Deeper 60’s score. Looking at his watch, he confided that they were going back out for another hour’s fishing since the fish were within a 10-mile radius of the IGY Marina.

The qualifier parade continued as Team Liquid Assets arrived with the day’s first blue marlin.  Angler Benito Liera had hooked her 363-pounder late morning and boated it in 45 minutes just before noon.

Team Galati, fishing on an 80-foot Viking built by the same name with angler Carmine Galati, brought in the day’s second blue marlin.  This one tipped the scales at 355 pounds and took 46 minutes to boat. A teammate confided that Galati had done everything right in the chair and the fish had cooperated …well sort of. According to Carmine, they had it to the leader eight times before it was gaffed. While pleased with their catch, they all agreed that they needed a larger one. Owner, Bob Hixson added that “Carmine builds a great boat and my guys can catch ‘em; plus, we have the best crew!”

Bob Manroe, with his entire Team Cowboys, followed the cart to the weigh station with the black marlin he had subdued as spectators wagered what the weight would be. When the weighmaster called out the familiar 1-2-3 before announcing the 310-pound weight, the losing bettor could be heard asking, “How about double or nothing on the next fish?”  Obviously, he had misjudged the weight.

The Chupacabra team arrived well after sunset. As the big fish was being unloaded, Bisbee half-joked, “These guys have won a ton of money in a lot of different oceans … I’m curious to see what they are bringing in this time.”

The puzzled look on his face told the story as Capt. Clay Hensley informed him that he had not one, but two fish to weigh.

Blake Stamper of Scottsdale Ariz., and owner of the “Chupacabra,” had landed a blue marlin early in the day weighing 326 pounds.  Laughing, Stamper commented, “This one was boring.  The second one was a blast! My friend Don Logue from Payson, Ariz., 84-years young, hooked him seconds before lines-out was announced and man did he put the crank to it! Capt. Hensley confided, “It was a hell of a day; the boss catches one along with his 84-year-old buddy who catches his own; it doesn’t get much better than that.”

“Seven qualifiers in one day alone is electrifying; two on one boat and two different species is unusual, plus a last-minute hookup sure made the hump day of the richest tournament on the planet one for the books,” Bisbee marveled.

One day left and judging what has happened thus far, no telling what it will have in store for the 120 teams. Tomorrow – the final day – is shaping up to be a humdinger.

For complete results for Day Two or live scoring go to Catch Stat.