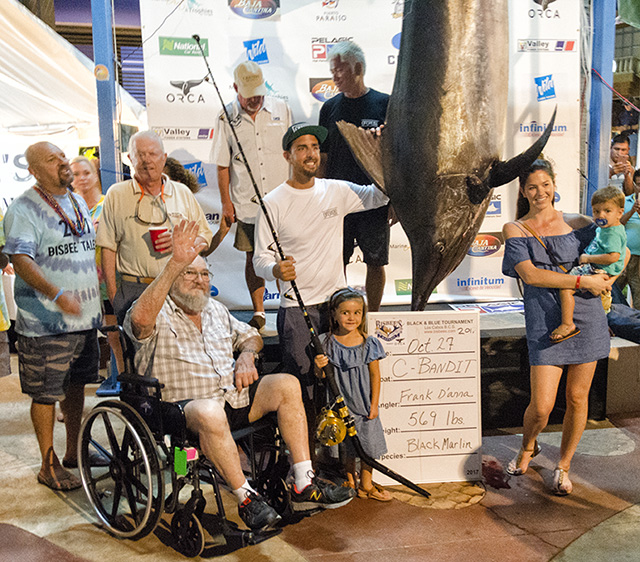 In an event filled with the busiest days in recent memory, with a second day where every fish brought to the scales qualified, it was hard to imagine that lightning could strike twice on the third day. However, once again within the first hour several fish were boated early, promising to be at the weigh station promptly at 3-p.m.

The first to arrive to the scale was angler Yuki Takagi representing Team Takagi 72 aboard “Go Deeper” with the first black marlin of the day. It had taken him over an hour and a half to land his prize catch that came up 7-pounds short of the minimum weight. Although disappointed, he and his team were delighted to hear the fish would be cleaned, filleted and distributed by Hope for Los Cabos to feed the Cabo kids.

Team Tiliches followed with the first blue marlin qualifier of the day. Caught by first-time participant Vidal Garcia Luna from Puerto Vallarta, a newcomer to the event, he demonstrated his skill by landing his fish in a mere 39 minutes. He was surprised how close he was to the IGY Marina when he hooked his 325-pounder near Cabo Falso.

The opening rush at 3-p.m. slowed to a trickle as the final lines out at 5-p.m. was announced by Axel Valdez at Tournament Control. Bobby Patton, Team Fastball, arrived to submit his team’s videos of their 4 releases to David Garcia of CatchStat, putting them in contention for the top spot in the Release Category. Chip Wagner had released a blue marlin on each of the first two days.

Patton commented that he had missed fishing the tournament on Wednesday because he was watching his Dodgers World Series game which they lost 7/6 in extra innings. He flew in to Cabo arriving on his boat late on Wednesday evening.

Then Team Fastball sealed the deal with two releases, Bobby Patton released a black and Mike Jones released a blue, on the final day to secure top spot on the leader board. A great team effort that he hopes his Dodgers can duplicate with a ‘come from behind’ win in the 2017 World Series.

“Last year we got 5th in the Release Division, plus we won more money than we deserved because we bet additional money in the “Chupacabra, winner take all Division”, Patton explained.

Wayne Bisbee, standing on the Weigh Station stage gazed down the Malecon and shouted, “That’s a BIG boy!” The crowd of spectators' heads swiveled just in time to see the huge black marlin on a cart pushed by the crew and followed by Danny Hogan, West Texas, and his entire Wild Hooker.

Tracy Ehrenberg, Pisces Sportfishing, slipped into the Photo Pool. Captain Shane O'Brien stopped and spoke to her as the fish was being prepared to hoist for weighing.

Ay-ay-ay It’s about time!” Ehrenberg chided before he could speak. She added emphatically, “I think it will go 480-pounds”.

O’Brien agreed, “Yeah, that’s what we think it is.  We caught it on live bait. C-Bandit caught a nice one though. They were hooked up alongside of us. We saw it jumping and I’m guessing over 500-pounds,” O’Brien replied.

“You look pretty calm about all of this …” Ehrenberg observed.

O’Brien smiled, “I just downplay things, 452 or 484, what’s it going to be? All I can say is the boat coming after us is the one we gotta’ beat, not anyone before us!”

As the big black was hoisted, Bisbee asked the crowd, “What do you folks think? I think we’re going to weigh a bigger fish than any we have weighed already!”

One of the photographers murmured under his breath, “It’s a very nice fish!” and at that moment, Jack Teschel roared “It’s 462-pounds for the Wild Hooker.”

“This bad boy is worth a lot of money … just doing the math in my head. If they are in the Chupacabra, it’s north of a million dollar fish,” Bisbee continued. “It’s over a one million dollar fish!” he repeated a second time. العناية بالبشرة Then he added, “Wild Hooker is no stranger to winning money in our tournaments!”

In the middle of the photo taking, Hogan stopped the photographers, went to the rail fence and motioned to a Mexican mother, asking for her to lift her son over the rail.  When she did, he took the boy by the hand and walked him back to have his picture taken with the monster fish.

“Give them another round of applause,” Bisbee suggested. “When was the last time you saw a million dollar fish hanging right in front of you,” he asked?

The multitude of camera clicks mixed with the noise of the crowd confirmed the importance of the moment.

Angler Danny Hogan fought his fish for 45 minutes that was hooked up late in the morning on live bait. He thanked everyone and commented, “We have a fantastic crew. I’m hail from South Texas and the rest of the crew is either from Hawaii or South Louisiana.”

When asked if he thought his fish would be the winning one, he replied. “I don’t know; there are two great teams coming behind us and both of them have good fish, but we are hopeful.”

C-Bandit with angler Frank D'Anna flanked by Bill McWethy, owner, and the rest of the team were the last team to arrive at the scale with their black marlin.  As the monster was hoisted, the Bisbee staff, along the large crowd of onlookers, stared in awe. It was the largest fish to come to the Bisbee scales in both of their October tournaments.

It took the effort of all of the station crew to haul it high enough to be weighed. When it was finally secured, weigh master Techel for the final time this season, counted, “1-2-3” as the number on the IWS digital scale stopped at 569-pounds and Techel called it out. The crowd howled with delight.

After an intense photo session which began with the team, then the family and finally with many of the Bisbee clan, including the patriarch, Bob Bisbee, who began the tournaments 37 years ago. They were followed by local dignitaries who flocked in to enjoy the limelight of this last and largest fish of the Bisbee Black & Blue … the richest tournament on the planet.

Yes, lightning seems to have struck for Team C Bandit for the second time in a row. Last year, they placed second with their 416-pound black. This year’s fish is the largest of the event and the final outcome with the placement of all the winners will be announced Saturday evening.

Angler Frank D’anna volunteered, “I have been doing this for the past five years and last year was my first year to be part of the C Bandit Team.  Last year, we took second place and hopefully we are ‘upping’ that this year. Lots of work and heartbreak out there and being here at the scale with a contender is what makes it all worthwhile. Also having my family here to enjoy the moment makes it special and I’m glad that it all came together. I’m just happy to be here. It was about a 45-minute fight. You know it’s tough to tell when your adrenalin is going; you are so focused in what you are trying to achieve.”

“I love Cabo and I’m here every year; I have my family here … the weather is great and it’s a great experience. I am always happy to spend time Los Cabos.”

Saturday night The Black and Blue features a special Award night celebration with Auction, Raffle, and David Pack's "Legends Live" Charity Benefit Concert, when all the winners will receive their hard-earned awards and the cash to go with it.