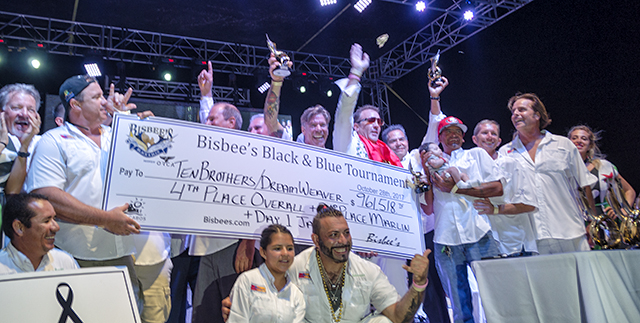 Saturday night was the welcomed finish line for the 120 teams that had fished their hearts out during Cabo’s Black & Blue Tournament.

The sleepless nights, questions about where to go, what to do – troll live bait or lures and what kind of either to use? – all had dominated the past three days.

Then, there were the woulda’-coulda’-shoulda’ moments that plagued almost everyone from the best and the brightest to the first-timers who were trying to get their heads around the BIG FISH/BIG MONEY tournament game that draws anglers like a moth to a flame.

Now that was behind them; in front of them was a night on the Cruise Ship Pier in the center of IGY Marina. Baja Cantina’s wait staff and chefs had spent most of the day preparing for the gala affair that included dinner beneath a perfect Los Cabos star-filled sky at a venue covered by a sea of white tables.

The evening promised to be as fast-paced as the tournament itself with many moving parts … from fresh sushi to lavish dessert trays.

Following a charity auction and raffle conducted by Andy Dunning, Dallas Car Sharks show benefiting the Bisbee Green Scholarship Fund, some of the children who would be recipients of the funds were introduced to the audience.

Tournament Director Wayne Bisbee then presented the cash, trophies and plaque awards for all of the 2017 Black and Blue winners.

“One hundred twenty teams with 807 anglers accounted for 14 black marlin, 54 blue marlin, 10 striped marlin, and 1 sailfish for a total of 78 fish with a hookup conversion 88%,” Bisbee began at the awards portion of the evening.

He continued, “All of the fish brought to the scales, regardless of whether they were qualifiers or not, were donated to Hope for Los Cabos.  Jen Limpert, representing Hope for Los Cabos, reported that the catch amounted to 11,249 pounds or 33,747 meals which would feed those in need. Many went to the Los Cabos Kids kitchens while others were delivered to the needy people in the barrios. It is so great that those fish help so many in great need!”

Bisbee announced that this year’s tournament was responsible for the largest number of qualifying fish in its history before he concluded the tournament by awarding the checks to the winners.

After the overall winning team, Chupacabra, received their award, the sky was ablaze over the IGY Marina with fireworks celebrating the final night of the richest fishing tournament on the planet as Queen’s “We are the Champions” echoed off the fleet of sportfishers in the marina.