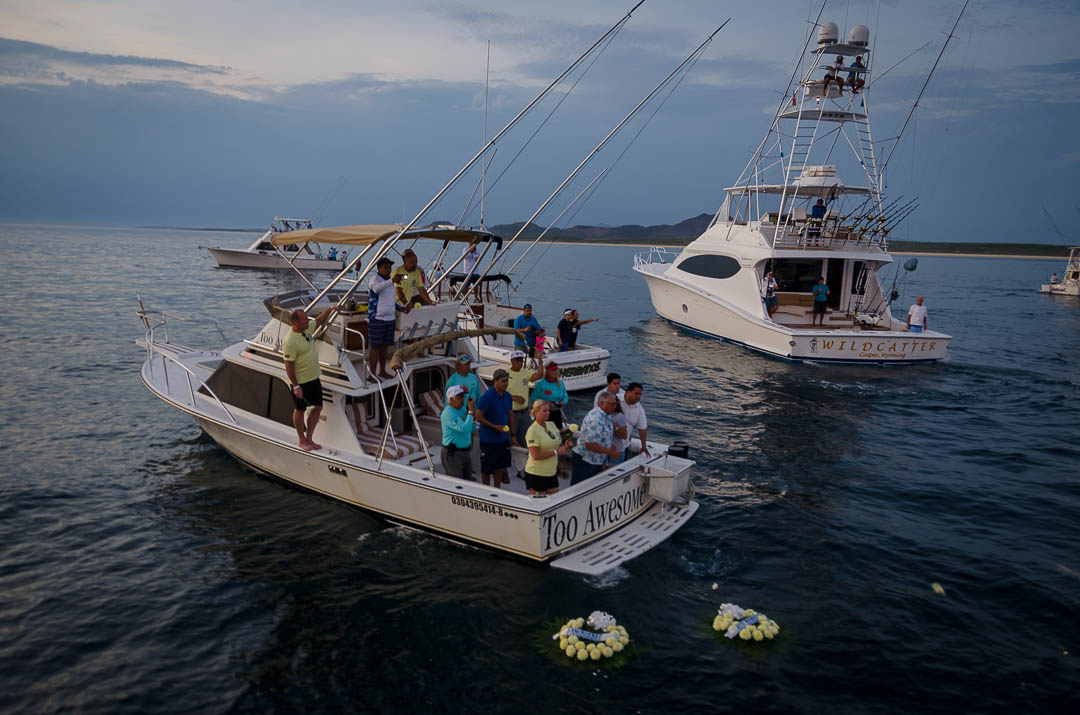 Day One of ECO began in the early dawn as the skies slowly revealed the typical low clouds on the horizon. The boat Too Awesome slowly led the way out to the start line. Aboard were: Captain Placido; Theresa Comber, owner of Too Awesome; Omar Arriza; Wayne Bisbee, Patricia “Tricia” Bisbee: Ing. Victor Carajal Los Cabos Mayor’s Representative; Jesus “Chuy” Valdez and Axel Valdez of Hotel Buenavista Beach Resort and photographer Danny Matthews.

The sun continued to peek over the horizon as many of the team boats circled the Too Awesome. Tricia Bisbee and Jesus “Chuy” Valdez stood at the stern holding floral wreaths that would be placed into the water marking the passing of Robert “Bob” Bisbee, founder of Bisbee Tournaments and father of Wayne and Tricia.

Before casting the wreaths on the water, Valdez spoke on the VHF radio to the entire fleet of 62 teams: “Robert Bisbee -- Bob to all of us. Here we are, your family and friends, to be with you at the close of your cycle of life. But now you start your journey to Heaven to be with our God. Amen.”

As his words echoed across the fleet, and the wreaths were dropped long-stemmed Chrysanthemums were added by individuals from other boats. Heartfelt applause echoed throughout the still of the morning in honor of Bob before boat horns drowned them out.

The flare signaling the start of the first day streaked across the sky as thousands of horses in the boat engines roared to life and sports fishers of all sizes sped for the horizon.

“The radios were ominously quiet throughout the morning,” Axel Valdez at Tournament control recalled later. “There were only four fish boated by noon and no billfish.”

Team North Star’s angler, Donald Whittier, was the first to boat several yellowfin. كيف اهتم بوجهي However, the team continued looking for a fatter one. Their persistence finally paid off as Adrian Miranda Camacho hooked and boated a much larger yellowfin tuna in the early afternoon.

Soon after the scales opened at noon, Matt Clifton, Team Scorpion, brought in a good-sized tuna that tipped the scale at 87.9 pounds, putting him in the early lead. He recounted how his Captain had located some fish in a small area where they headed.

“There were lots of yellowfin jumping around, but they wouldn’t bite,” he explained. “We finally enticed one with a squid. But that was before heading outside in search of a larger one traveling with porpoise where we even resorted to the popular kite method.”

However, it was not to be as those they saw were smaller than the one they had in the box. So, they brought it to the scale and hoped for the best.

In the Heaviest Dorado Category there were only two brought to the scale. The first one didn’t make the minimum weight. However, when Team Outcast arrived at the weigh-station, spectators oohed and aahed as one of the largest dorado seen this year at East Cape was brought in. Angler Clarence Rowse subdued the 50.5-pound monster in mere minutes which put him at the top of the leaderboard in the Heaviest Dorado category for the day. As a matter of fact, that fish would have beaten the winner of the Dorado Shootout held several weeks ago -- a 47.5-pound bull dorado.

Early afternoon, Matt Clifton was feeling lucky as his tuna remained at the top of the leaderboard. Then Team Awesome arrived as they huffed and puffed bringing their bulging kill sack to the scale. After zeroing the scale, the “fatty” was hoisted; when the numbers finally stopped moving, Tricia, the official weigh-master, called out the weight as angler Shaun Speer held his breath…90.1-pounds! Team Scorpion was knocked out of First Place and Team Awesome celebrated … loudly!

However, the day’s yellowfin drama still had another act to follow. The well-appointed skiff, “North Star,” pulled up to the pier. Angler Adrian Miranda Camacho followed his crew who also carried another kill sack and plopped the heavy bag on the cement pad beneath the scale. The spectator gallery kibitzed as it was unzipped, shaking their head in amazement and disbelief. When weighed, Camacho’s yellowfin weighed 102.3-pounds! Landing this behemoth in only 33-minutes, he delivered to his team the Top Spot for the day.

The billfish seemed to be waiting their turn as there were no fish boated until more than an hour after lines out at 4:00-p.m.

First, there was Feelin' Azul with angler Jim Koby, boating his black marlin after 2-hours and 02-minutes at 5:10-p.m.

As fate would have it, the second black marlin was boated only one minute later by Steve McCoy on Team Booze Brothers after a 1-hour and 50-minute battle.

And not wanting to miss the party, “Whata’ Journey” with angler Luis Leonardo Gonzales brought his blue marlin in after a 3-hour and 36-minute exhausting tussle.

All the teams and their fish were close enough to make it to the weigh-station before the 7:00-p.m. close.

“Whata’ Journey” arrived first with their impressive-looking blue marlin as it was hoisted up to be weighed. The crowd consensus was that it would clear the minimum without difficulty; yet, when the barely below minimum weight was announced, the crowd groaned with the team.

Next came angler Steve McCoy on Team Booze Brothers with his hefty, black marlin.  It required extra help to hoist it high enough to weigh but was well worth the effort of the weigh station team.

The very-respectable, 538-pound black that almost didn’t make it to the scale as it refused to quit fighting! Not only did it take 1-hour and 42-minutes to subdue, but it also nearly sawed the 100-pound leader in half with its bill.  McCoy commented, “It was my largest fish I’ve ever caught and the first time I’ve ever won in a tournament!”

The final billfish of the day was another black marlin; although appearing fatter than the first, it didn’t live up to expectations. Disappointed that their catch failed to take all the marbles -- just some of them --“Feelin' Azul” and angler Jim Koby explained, “We were fishing for tuna with light line. When it bit I was sure it was just that! Then it began acting weird, and we thought it might be a ray. When it surfaced, we backed off and took our time, so the line wouldn’t break. Then we backed down; we were pushing the limit. Purely by accident that we succeeded. It took over two hours to bring it to gaff.  And we are still in the money!”

“The late 15 minutes of pandemonium added credence to the eight hours of boredom. تجربتي مع الكركم لحب الشباب I was having my 2-p.m. meltdown.  I traveled all the way from Wisconsin although I also have a home at Las Mañanitas. I also fish the Black and Blue and Las Cabos Offshore.  However, the largest fish I’ve ever caught was when I was just fishing for fun, a 680-pounder.”

Day One began with a touching tribute to Bob Bisbee in the morning.  This is the one of a few tournament he has not attended in person, but we believe he was with us in spirit -- watching the day play out, as he always has.