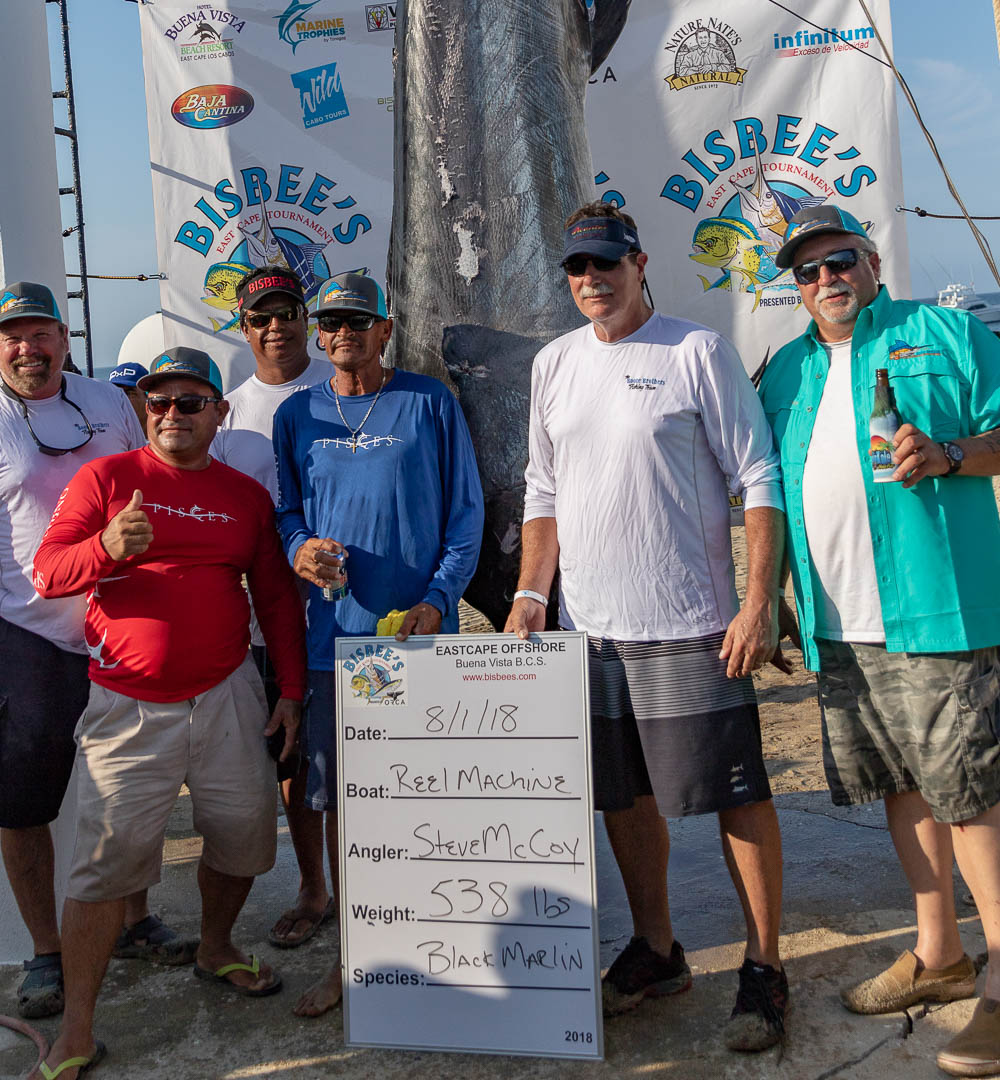 Although only sprinkles and  enough to even matter, early morning raindrops greeted the teams as they prepared for Day Two.  Still, it was enough to add to the frustration of those who were searching for the right place at the right time – looking for their chance to make the Leaderboard for a shot at some of that ECO record-setting $657,125 prize money.

Once again, the fleet of boats crowded the starting line which was determined by the position of the Committee Boat, “Too Awesome.”  When the flare flew across the sky, the bulk of the fleet headed south as they had on Day One, leaving white water and black smoke in their wake.

The first hour flew by quickly.  Then a little after 8-a.m., Team Reel Deel’s angler, Tim MacHugh, hooked and released the first fish of the day in 23 minutes. Adding two more released billfish to their team tally before noon, it was clear they were in a hot spot.

The first boated billfish of the day honors, however, belonged to Team Vagos del Mar’s Rueben Martin, the lucky angler who dispatched his blue marlin in just 23 minutes as well. This fish earned them their first trip to the scale in the tournament and they arrived just as it opened.  The weigh station staff eagerly awaited their arrival and much to their delight as well as to the delight of the few early-bird spectators, the fish exceeded the minimum weight and then some … 335-pounds! This placed Team Vagos del Mar at the top of the Leaderboard for Day Two.

Wisely, Team Vagos didn’t rest on their laurels.  Instead, they hurried back to their boat to search for a dorado or yellowfin tuna in the Gamefish Category, hoping their luck would continue to hold.

A short time later, the tuna parade began in earnest as seven different teams brought in yellowfin: A 61.6-pound fish brought in by Mantarrayas Team’s angler Manuel Urusqueta followed by a 62.8-pounder caught by Randy Wren on Team Jones; Shelia Verdugo, Team Scorpion arrived with a 64.4-pound tuna; Team North Star, (a frequent visitor to the weigh-station) brought in angler Daniel Miranda Camacho with his YFT weighing 67.4-pounds; Team Awesome (for the second day in a row) arrived with what turned out to be the second largest yellowfin of the day caught by Mike Loynes tipping the scale at 78.5-pounds; but the winner in the Tuna Division went to Team Altata Bay and angler Fausto Gutierrez with his 80.3-pound YFT.

Meanwhile, the Billfish Category was up for grabs for Day Two. Unfortunately, Team Travesia, with a “Hail Mary” blue marlin caught by Juan Antonio Torreblanca in 37 minutes, failed to qualify.

After suffering through a slow Day One, on Day Two, Sporty Game with angler Jacob Rodriguez, hooked and landed their first blue marlin of the tournament. However, the team continued to search the remainder of the day for a bigger fish, to no avail. When they arrived at the scale later in the afternoon, their 370-pound blue was just enough to top all comers and sure to earn them a check for a big chunk of the largest total amount ever awarded in this event.

So far, Daily Categories, except the gamefish dorado, have been filled each day. From all appearances, the outcome for the Releases is still on the line as Reel Quest, Reel Gold and Karma 3 begin the final day with a razor-thin margin among them of only 100 points.