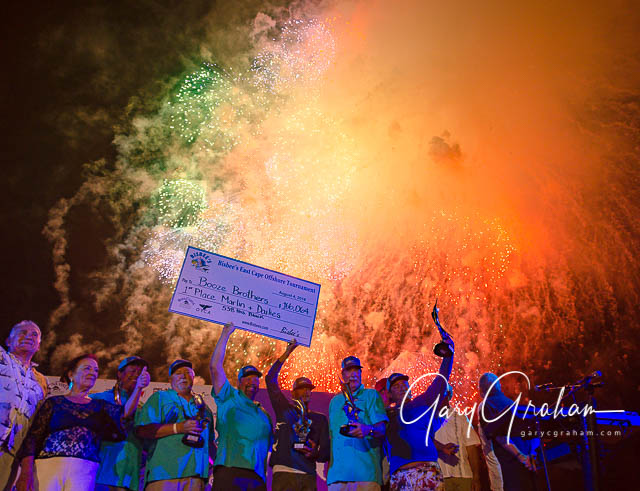 “May Bob Bisbee's Spirit touch our fish and honor his legacy …”

With the above tribute inscribed on Team Awesome’s East Cape Offshore Tournament shirts, their wish to include and honor the man who founded the Bisbee tournaments was underscored.

This year’s ECO was record-setting with the largest amount of prize money – $657,125 – awarded in 11 checks to competing teams for their efforts over the three days: 360 anglers on 62 teams. In addition, a comment heard often echoed one made by Mark Rayor, Jen Wren Sportfishing: “There are more large sportfishing yachts than I have ever seen in this tournament before. They’re catching on to how great this event is!”

Qualifying catches were brought to the scale on all three days. The first time that ever happened in the event’s 18-year history. Catches included:

Participants gathered on the beach of the Sea of Cortez in front of Hotel Buenavista Beach Resort to celebrate this year’s winners.  Hotel Chef Dahli De la Peña and staff had prepared a sumptuous Mexican Buffet served while a very happy group of tournament participants, their friends and families were entertained by “Cabo Max,” a crowd favorite, both before dinner and after the Awards Ceremony.

The program began with a 50/50 Raffle benefiting the local Humane Society. Offers not only supported snap clinics, but also fed dogs and cats along with placing the pets with caring families in the United States. The winner of the raffle donated his $1,000 winning check back to the organization, doubling their total raised to $2,000.

Next came the Early Bird Drawing, won by Team Reel Energy; they received a basic entry into next year’s ECO.  Brian Walley was joined by his captain, Horace Barge, who laughed, “We finally beat Reel Quest at something!”

Then, on to the conclusion of the tournament … the awarding of the checks to the 11 winning teams.

“This is the largest number of checks we have ever distributed at the tournament,” Tricia Bisbee stated. “It’s been a great event … a perfect way to kick off the next generation of tournaments. Dad would have been so proud!”

In closing, Wayne Bisbee said, “The Bisbee family and staff thanks the entire hotel host Valdez Family for their ongoing and continuous support over the years along with all of the anglers and sponsors.  This type of event is only possible because of them.”  He concluded with a wish to “see all of you at the Los Cabos Offshore and the Black & Blue in October.”