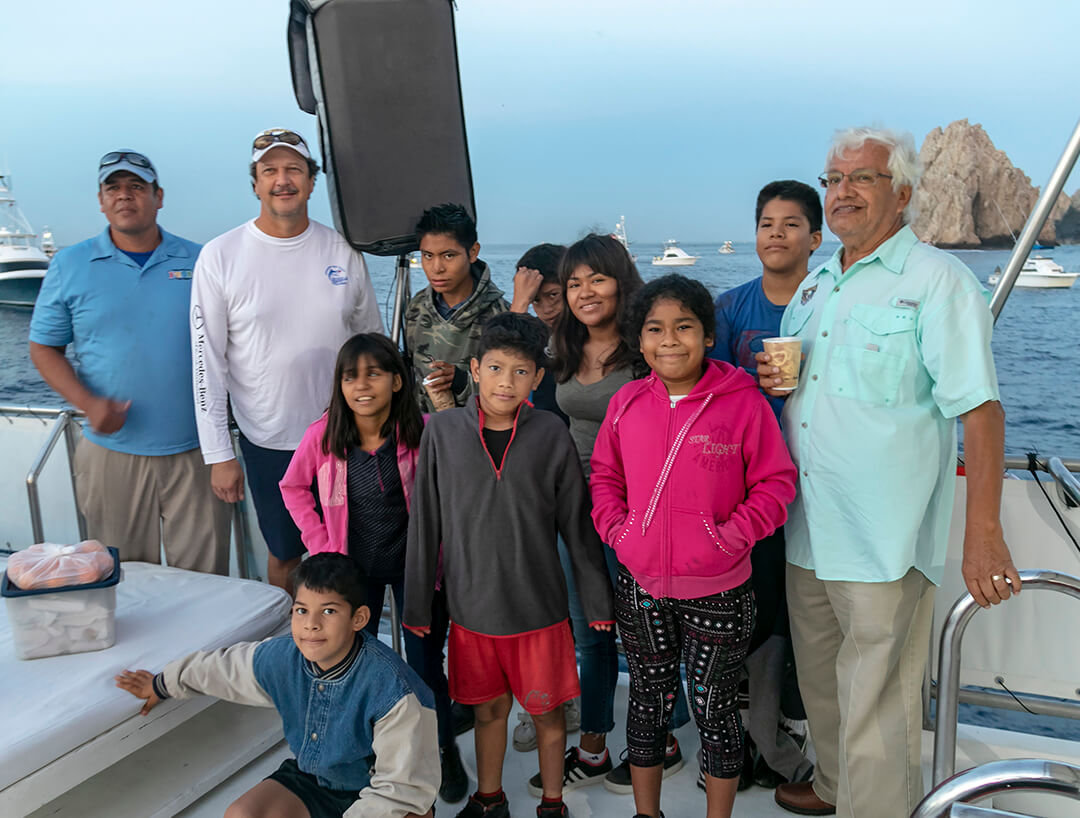 Within an hour of the flaregun start on Day One, the first blue marlin was on the line for Team Pacificos and a mere 14 minutes later angler Cuitláhuac Garcia Jimenez successfully released it, breaking the ice for the other 122 boats.

Throughout the morning, a good number of billfish hookups dominated the calls to radio control reporting many released fish that were judged to be non-qualifiers (300-pound minimum), or were stripers or sailfish.

Around 1:00 p.m., Team Predator reported that team member Jarrod Smith was hooked up to a big blue marlin. Forty-seven minutes later the team jubilantly reported that they had landed a huge fish and were headed to the weigh station.

Back at the scales, staff members Jack Teschel, Pensacola and Burt Merritt both from Pensacola, FL were finishing up the last minute details, readying the weigh station for the 3 p.m. opening. They were just in time for the Team Predators’ arrival just after 3.

Unsuspecting tourists strolling along the Malecon in front of Puerto Paraiso Shopping Mall were first startled and then awed by the parade headed toward the weigh station led by an entourage of team and crew members pushing the huge blue marlin on a cart that was followed by tourists.

As the monster blue arrived, the photographers and staff were astonished by the size of the fish. After attaching a tail-rope, the crew hoisted the 10-foot long prize up to be weighed. The scale was zeroed and verified by angler Smith.  When the scale settled, the weighmaster roared … FIVE HUNDRED AND TWENTY-TWO POUNDS!

The Team Predator members, Morgan North, Owner, Jarrod Smith, angler, Gary Willmott and Jose Grejeda, high-fived and hugged each other as the weight was announced, joined by the growing crowd of spectators with laughter, cheers and cries of “congratulations.”

The team was in “across the board” (except for the newly added “Chupacabra” Category”) and since it was the only qualifying billfish that day it earned an impressive $333,418.

Smith volunteered, “We had hooked a smaller -- maybe 300-pound -- fish earlier, that had thrown the hook and this one was our third in three days that we’ve hooked.”

Morgan North, sporting his “Morgasm” t-shirt declared gleefully, “Thirteen years and this is our first trip to the scale!”

In the Yellowfin Tuna Category there were only two qualifiers weighed in:

Team #110 Catamaran aboard Mama Serena; angler, Angel Aripez weighed in a yellowfin tuna weighing 73-pounds that edged out Team #113 Game Time, angler Matt Condon, who battled his 70-pound yellowfin tuna, hooked on a cedar plug lure, for 3 hours and 21-minutes before bringing him aboard. Condon confided that they had caught 15 bait-sized YFT before finally catching the larger one.

Team Catamaran earned a huge check for $64,930. in the yellowfin tuna daily category.

There were no qualifying dorado caught so the Jackpot rolls over to Day Two.

In the release categories the daily winners were:

Another big winner the first day was Casa Hogar and the families living out in the Barrios. Jen and David Limpert of Hope for Los Cabos who collected all the fish caught Friday, arranged to have them cleaned and filleted and then delivered 48 double-sized zip-lock bags the same evening. They have been feeding Los Cabos families since 2015.

One day down and plenty of cash to aim for the second day. Should be an exciting finish and hopefully a lot more families in Cabo San Lucas will benefit.

Total count the first day were:

To follow along during the day visit CatchStat for live scoring.