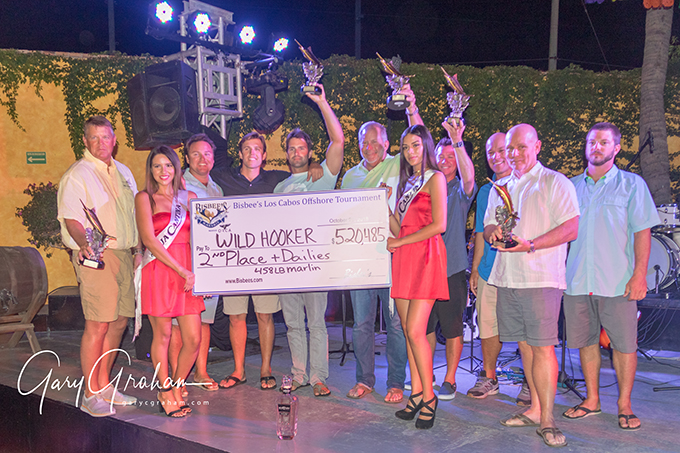 The 2018 Los Cabos Offshore is now in the history books and what a tournament it was!

Alhough releases dominated the action, both Day One and Day Two were good with the second day an improvement over the first. By the end of the second day, there had been a total of 163 fish caught; 5 billfish exceeded the minimum weight of 300 pounds and a total of 8 tuna and several dorado were brought to the scale.

There were 123 teams, 763 anglers, competing for not just bragging rights but also the princely sum of $1,165,000 dollars on the line that was passed out at the popular Cabo San Lucas Maria Coronas Restaurant hosted by owner, Jorge Gonzales.

The enthusiastic but weary teams that had enjoyed the two days of pursuing the big gamefish on the calm, but very distinctly different bodies of water -- the Pacific and the Sea of Cortez –were now ready to relax, mix and share their  fishing “tales” with their friends and competitors as they came to celebrate with the winners of the tournament to the unique, diverse entertainment of the popular group “Cabo Max.”

Wayne Bisbee, Tricia Bisbee and Clicerio Mercado, began the evening by introducing visiting dignitaries and others at the awards ceremony including a special visitor, Bobby Carter, director of the Mississippi Gulf Coast Billfish Classic, Biloxi, Mississippi, and the Veteran Outdoors group of Wounded Warriors who had competed aboard the boat 19’s Toy one of the boats in the Redrum fleet.

“This year,” Wayne continued, “we are very proud to have so many our Bisbee family members join us, including Bob’s brother George. Some have traveled to Baja for the first time.”

Everyone was greeted with a standing ovation by the crowd.

Wayne also thanked the many sponsors,  https://bisbees.com/Sponsors/List, and the tournament competitors before drawing the early bird winner, which was --Team #8, Team Faston on the Solmar 4.

Next, the exquisite Marine Art Trophies and check were presented to the eight winning teams.

Wayne continued, “And I would like to thank each of you for making this one of the most successful, memorable Los Cabos Offshore Tournaments.”

Cabo Missions for Christ - who gave to 35 families they help in the barrios.

Community of 20 families we help in the Barrios.

In addition, the cleaning crew also received fillets for their help in the cleaning and distribution of the fish.

“This makes a tremendous difference to all of these people!” Trica declared. “Giving back to the community that gives to us is a “no-brainer,” and although we cannot feed everyone who is hungry, we can surely do our part.”