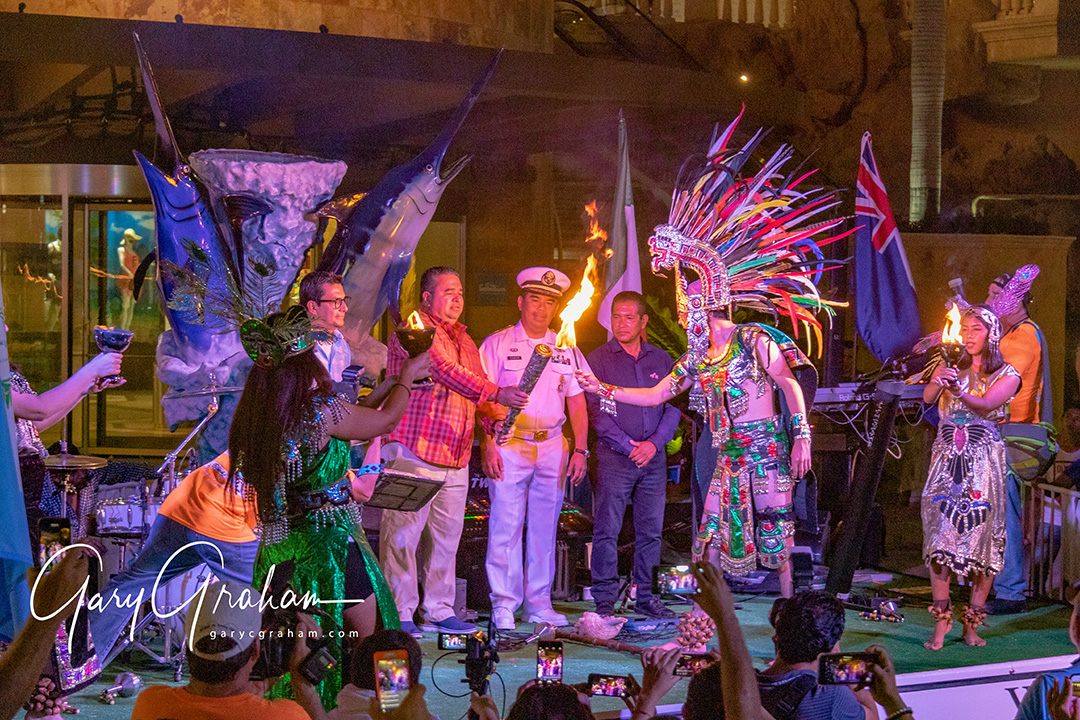 After more than a week of ‘Willa’ (or won’t she?) the storm headed east to the west coast of mainland Mexico. Our thoughts and prayers go out to Puerto Vallarta as Hurricane Willa goes ashore as a Category 3.

Here in Cabo San Lucas, the Port Captain has given us the “green light,” much to the delight of tournament participants and organizers alike.

The “Cabo Max” band had played throughout the afternoon as teams either registered or made last minute adjustments to their information, and of course they were taking the opportunity to swap information with one another.  Laughter and teasing could be heard throughout the mall as most of the teams were relieved and happy as well as very optimistic about their chances in the upcoming days, especially after they learned the Port Captain had kept the port open.  Although a topic of conversation for many was certainly the recent swells and wind from the outer bands of “Willa.”

The final team didn’t make it to the registration table until after Wayne Bisbee and Clicerio Mercado had taken the stage for the scheduled “Captain’s Meeting.”

Bisbee welcomed the large group crowding the stage as he began. “You folks are going to be blown away by the numbers this year. It’s bizarre!  While our number of teams is down, the jackpot is approaching FOUR MILLION DOLLARS and we still have teams signing up.

He continued, “We would like to thank all the sponsors who are an important piece of the puzzle in producing an event of this magnitude.  We could not be where we are today without them.”

“As you all know we have been on an emotional roller coaster this week. We must thank all of you for your kind comments which made Dad’s Memorial much easier,” Bisbee observed.

After touching on a few high-points regarding rules, check ins, etc., Bisbee added that all the rules, schedules and other information could be found in this year’s magazine-sized program.

The Atemoxtli Ballet Company presented a Pre-Hispanic fire dance that assisted Luis Andrés Córdoba Urrutia, Secretary of Fisheries Aquaculture and Agricultural Development of the Government of the State of Baja California Sur (SEPADA) in lighting the torch that will burn throughout the event.

On Wednesday morning, Wayne Bisbee announced that the total number of teams had grown to 114 with a total jackpot of OVER FOUR MILLION DOLLARS -- exactly $4,038,625.  This figure has only been achieved on several times in the past.

The flare gun start, beginning the first of three days of fishing, went off without a hitch today. However, 80% of the field elected to head north into the Sea of Cortez -- presumably because of the left-over swell and wind from “Willa.”

The weigh-station will be opened at 3:00 p.m. local time. Wayne Bisbee quoted a phrase Bob Bisbee Sr. so often suggested, beseeching all tournament anglers to “Bring him a BIG fish!”