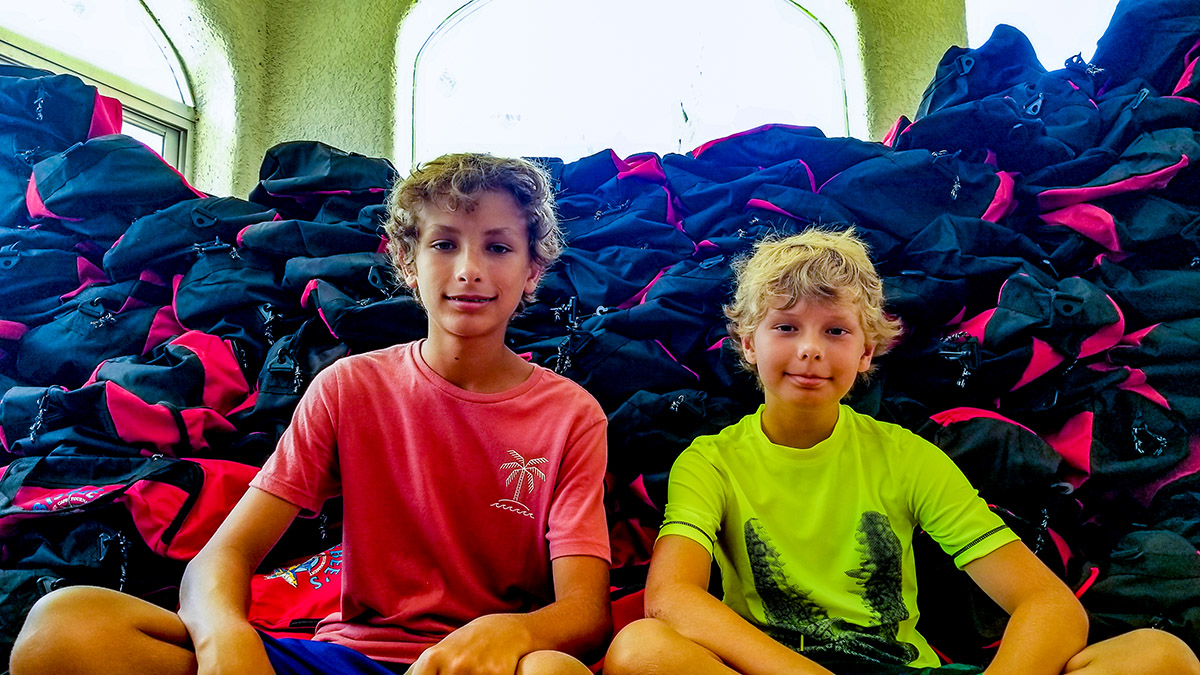 It was Aug. 1 and time for the Bisbee Team to hang banners and unpack swag for the Custom Pelagic duffel bags.  There were T-shirts, visors, and special Pelagic cups – one for each of the four anglers on the teams that were anticipated to arrive when registration opened at 3 p.m.

Bisbee tournament officials always believed in allowing the next generation to be part of the team, and this year as Bisbee’s East Cape Offshore celebrated its 20th Anniversary, it was no different. David Garcia’s two sons – David and Ryder – eagerly pitched in with Jake Pavlu, who was overseeing them at the swag table getting organized before opening time.

Since 46 teams had preregistered on the website, the entire crew was eager to see the final number, and what the total jackpot would be by the time the Captains’ Meeting was called to order by Wayne Bisbee and Clicerio Mercado.

Living up to its reputation, East Cape welcomed the participants with sweltering heat. Teams trickled in slowly throughout the afternoon, breathing a sigh of relief as they entered the air-conditioned dining room.

Of course, the teams wandered between the bar and dining room hoping to stumble on some additional “intel” to add to their own knowledge gained while pre-fishing during the week.

The consensus seemed to be that although the weather was hot, the fishing was not so much!  Teams, for the most part, remained non-committal. Remarkably, eight of the 11 of last year’s winners returned, vowing to make it a repeat this year.

As the sun sank behind the Sierra de La Luna Mountains leaving behind a hint of a cool breeze, Wayne and Clicerio greeted the growing crowd. Wayne covered tournament rules which included only a few minor changes. He also cautioned the teams that videos must clearly indicate a blue or black marlin; if not, the release would be scored as a striped marlin or sailfish. Mercado translated the minor changes and the cautions into Spanish.

Bisbee then announced that the total of teams signed up was 66, slightly higher than last year, but not what they had hoped for. However, on the winning

side, the total jackpot increased to a record $790,000, the largest amount in the 20-year history of the ECO.

He added that whether or not the two-day format continued or the tournament returned to the three-day format would depend on the input from the participants. A poll would be taken soon.

The following morning, a special tribute celebrated the life of the late Jesus “Chuy” Valdez aboard the “Too Awesome” with family and guests aboard.

Immediately following, the flare gun start signaled the beginning of the two-day tournament. At press time the scales were just opening, and a yellowfin tuna and two blue marlin were headed to be weighed.  Check on CatchStat for the latest information.

Hotel Buena Vista has been offering cookout dinners on the beach – party lights strung and tables set with colorful linens; guests linger at the pop-up beach bar sipping fresh cocktails. Along the stone sea wall, food service tables are piled high with dinner fare.  “Guests rave about the live music and vocals by Rafa as they enjoy the bonfire and beach lounge area where they go to kick back after dinner,” said hotel spokesman Axel Valdez.

The Friday night affairs seemed like a perfect fit for East Cape Offshore Team Members.  Continued Valdez, “… another wonderful perk for all of those aboard their boats anchored in front of the hotel.”

We hope we see you there.