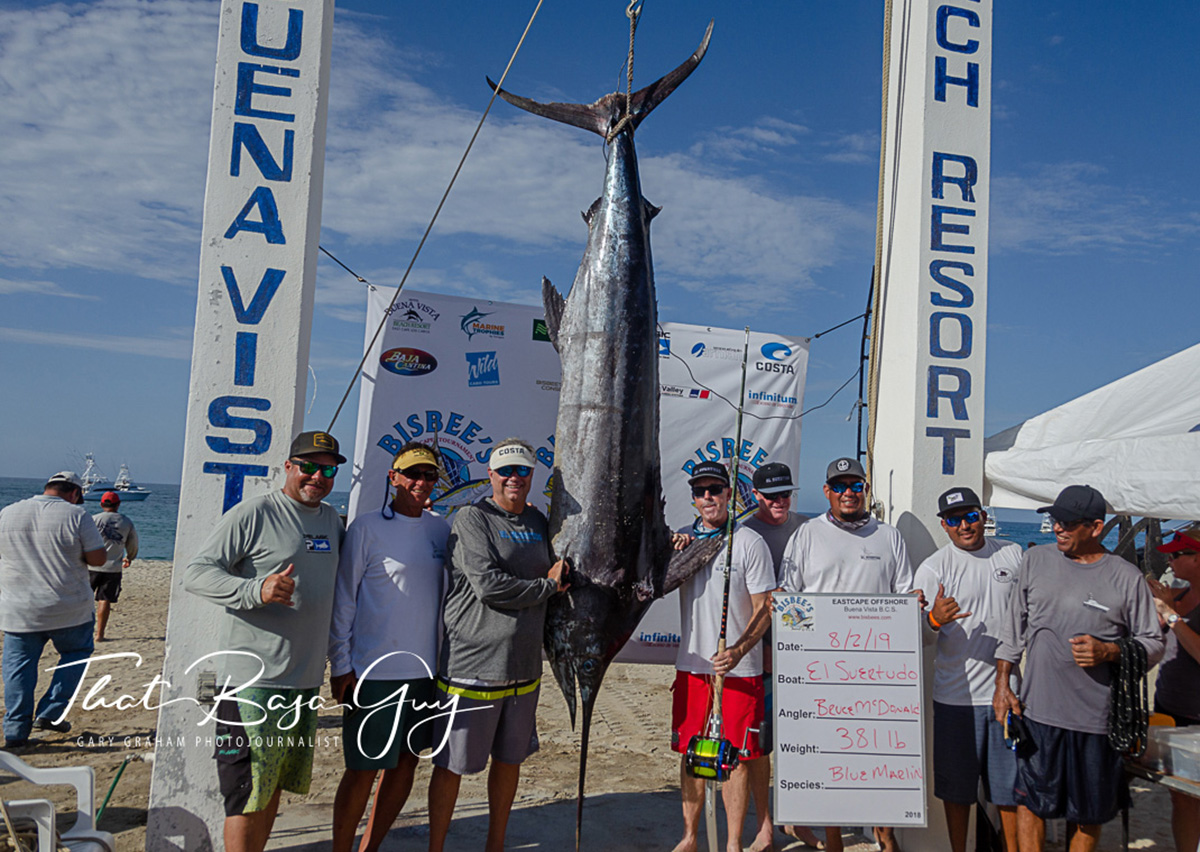 Shortly after Wayne Bisbee and Tricia Bisbee finished setting up the weigh-station, there was news that the third hookup reported by Team “Snafu” aboard the “Eclipse” was boated.   With the yellowfin tuna aboard, they headed back to the weigh-station in front of Hotel Buena Vista Beach Resort.

A few spectators had already heard the news on their VHF radios and eagerly awaited the arrival of the team.

Before long, the boat was alongside the pier, and the six crew members marched to the scale with a huge, insulated bag. “That bag is big,” commented one spectator, “the tuna in it should qualify.”

The fish was hoisted up, and as the dial slowly stopped spinning, Tricia declared the weight at 58.8-pounds – giving the team a winner in the Tuna Division. However, there were rumors of three other fish that had been hooked and might be coming to the scale.

That convinced the celebrating team it should go back out to its “honey hole” and try to catch a larger one.  It seemed to be a good plan, as both tournament control and CatchStat confirmed a steady stream of hookups throughout the morning, including one blue marlin boated just before noon aboard “El Suertudo.”  However, Captain Greg DiStefano radioed they were going to continue fishing until they either caught another one or lines-out at 4 p.m.

During the afternoon, the bite slowed until a brief flurry just before the deadline at 4.

One blue marlin was brought to the scale failing to make the minimum weight of 300-pounds, thus deducting that team 97 points. There had been several more yellowfin tuna reported, and the teams with them decided that they were not large enough to alter the score for the day.

No dorado were brought to the scale because of the size minimum of 30 pounds, the same for both dorado and yellowfin tuna.

After lines-out, as the teams returned to the hotel, there were many “would- a, could-a, should-a” tales of near misses on both blacks and blues that could have been qualifiers. Captain DiStefano had a second fish that finally won its freedom. Team “Cloud Nine” also had their story of a huge black that tried to eat a 35-pound tuna.

During the fiesta on the beach later, teams seemed optimistic and sure they would have a shot at the nearly $400,000 still left in the jackpot for Day Two.