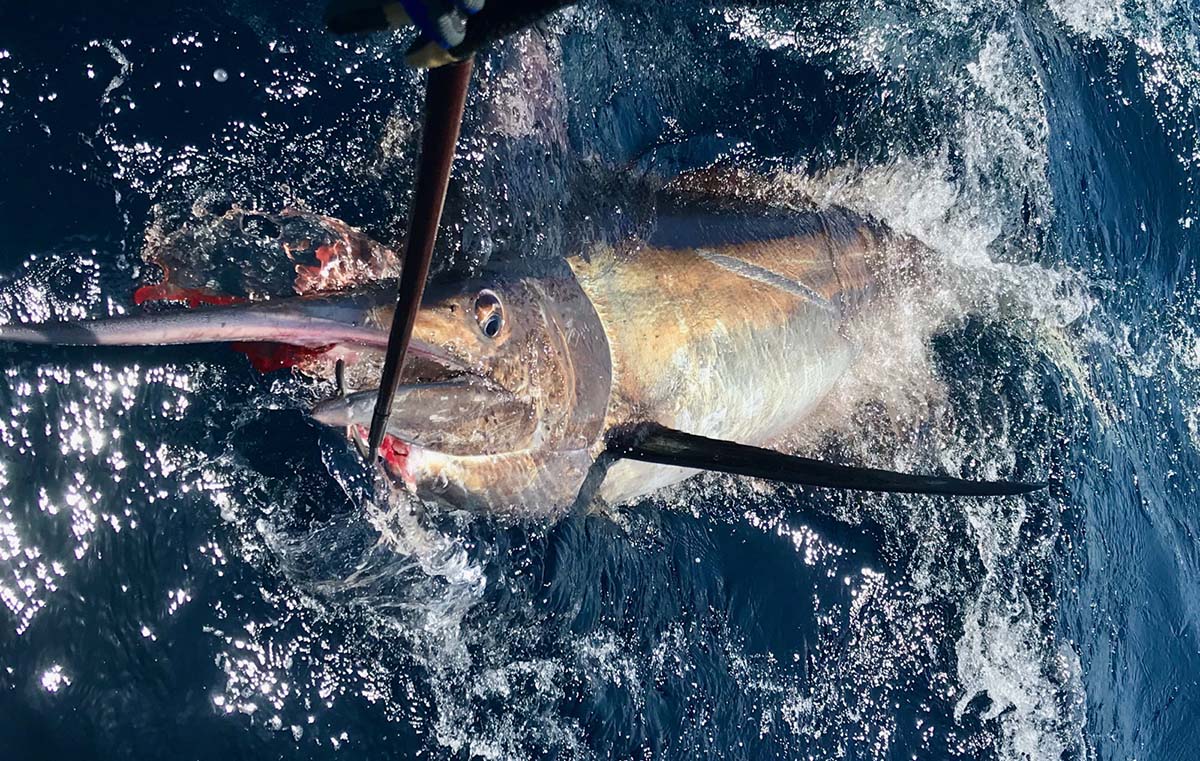 Prior to the 7 a.m. start, 66-teams crowded the start line as the flare rose across the horizon for the second and final day of the Bisbee East Cape Offshore Tournament. Would it be decided in the first inning or last at-bat?

The roar of the engines echoed along the tranquil East Cape shoreline as the fleet raced out, leaving huge wakes of white water and plumes of black smoke trailing behind.

The bulk of the fleet headed straight east toward the mainland, while others ran a handful of miles along the shore following Baja’s coast. Billfish, tuna, and dorado were all possible quarries on the path to the winner’s circle.

In the Release Categories, points could be earned for striped marlin and sailfish, with bonus points for black or blue marlin if – and that’s a big if – the videos could confirm the species.

Before the first hour of the day ended, Team Tijuana Si had released the first striper of the day, soon followed by Team Hotel Buenavista’s boating of the first yellowfin tuna.

The very next call was from Team Los Compadres reporting that they had landed the first dorado in the East Cape Offshore.

From that point on, billfish dominated the catch and at 11:26 Team Sirena reported a black marlin hookup; it was subsequently released after much debate amongst the crew so the team could continue fishing for a fish a tad larger.

In the meantime, Team Hotel Buenavista decided to bring its tuna to the scale when it opened. Angler Esaul Valdez watched anxiously as the needle of the scale settled and Wayne Bisbee read the weight on the digital scale: 60 pounds, 8 ounces!

To which Esaul declared, chuckling. “I beat Felipe (his brother) by two pounds!”

His tuna also had an impact on the other boats that had reported boated tuna. Apparently, the weight of his fish discouraged all but one team from bringing their fish to the weigh scale late that afternoon.

By afternoon, the yellowfin tuna shut off and most of the teams, while searching for the “big one,” worked on improving their release scores and positions on the CatchStat leader board.

Team 2019 El Regalo, and their angler Sheila Verduzco arrived well after lines out to claim the third heaviest yellowfin tuna of the tournament, improving Sheila’s position from the prior 2018 ECO Tuna Division.

Regardless of the lack of billfish brought to the scale on the second day, most teams found billfish action resulting in changes in the leader board – the problem was finding a qualifier to bring to the scale.

One comment heard this morning at breakfast was, “Imagine a 381-pound fish winning all that money?”

Of course, there were many, many stories about the “one that got away.”

However, just for the record, the black marlin featured above that was released by a team midday on the second day in hopes of bringing in a larger one – what would you have done?

Cloud cover seems to ensure that tonight’s 2019 East Cape Offshore Awards Party will be cool for everyone, but more so for some!