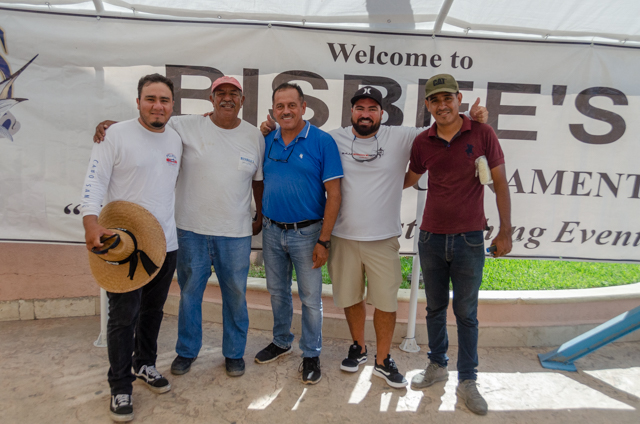 Thirty-four years ago, a young man named Fernando Antonio Flores was hired by Bob Bisbee to help during the Black and Blue Tournament. Fernando soon became one of those cheerful, reliable employees who kept the event running smoothly; want to know where something is in the warehouse? Ask Fernando. Need help at the dock? Call Fernando. Weigh-station? Fish cleaning station? Equipment problem? Fernando has it covered. Over the years, his responsibilities, along with his team of workers, grew.

In short, Fernando became that “Go to Guy.” He's the one in the pink cap.

“He and his crew are those behind the scenes keeping this operation running, always there willing to help when help is needed; we couldn’t run the event without them.”…Wayne Bisbee

When you see Fernando, thank him for his many years of service and tell him that you appreciate his efforts to make your Bisbee Tournament experience better. You’ll recognize him by his smile.

One can only imagine how the first members of the Bisbee team felt when they arrived last Sunday only to be greeted by a tropical cloudburst of epic proportions, with a river of water flowing down the streets of Cabo and arroyos in surrounding communities, and added to the fact was the disconcerting news that the IGY Fuel Dock, the largest in the Marina, was closed.

Not an auspicious start! However, there was good news; the truckloads of items and materials required to host two of the largest tournaments in Cabo during the following whirlwind 10-days had arrived and were safely stored in the warehouse.

Fortunately, the weather has settled down, and everything is back to normal as final touches are in place before the Los Cabos Offshore Registration begins Thursday at 2:00 p.m.

Also, Darren Carey, Director of IGY Marina, called late afternoon on Tuesday to assure everyone that the Fuel Dock had reopened.

WE´RE BACK! Fuel Dock is back in service for you this tournament season opening from 6am and closing until the last boat loads! Thank you for your preference!

Registration begins on Thursday at 2:00 p.m. Inside of the La Central Restaurant which is home to the awesome Cabo Yacht Club.-- see you there!