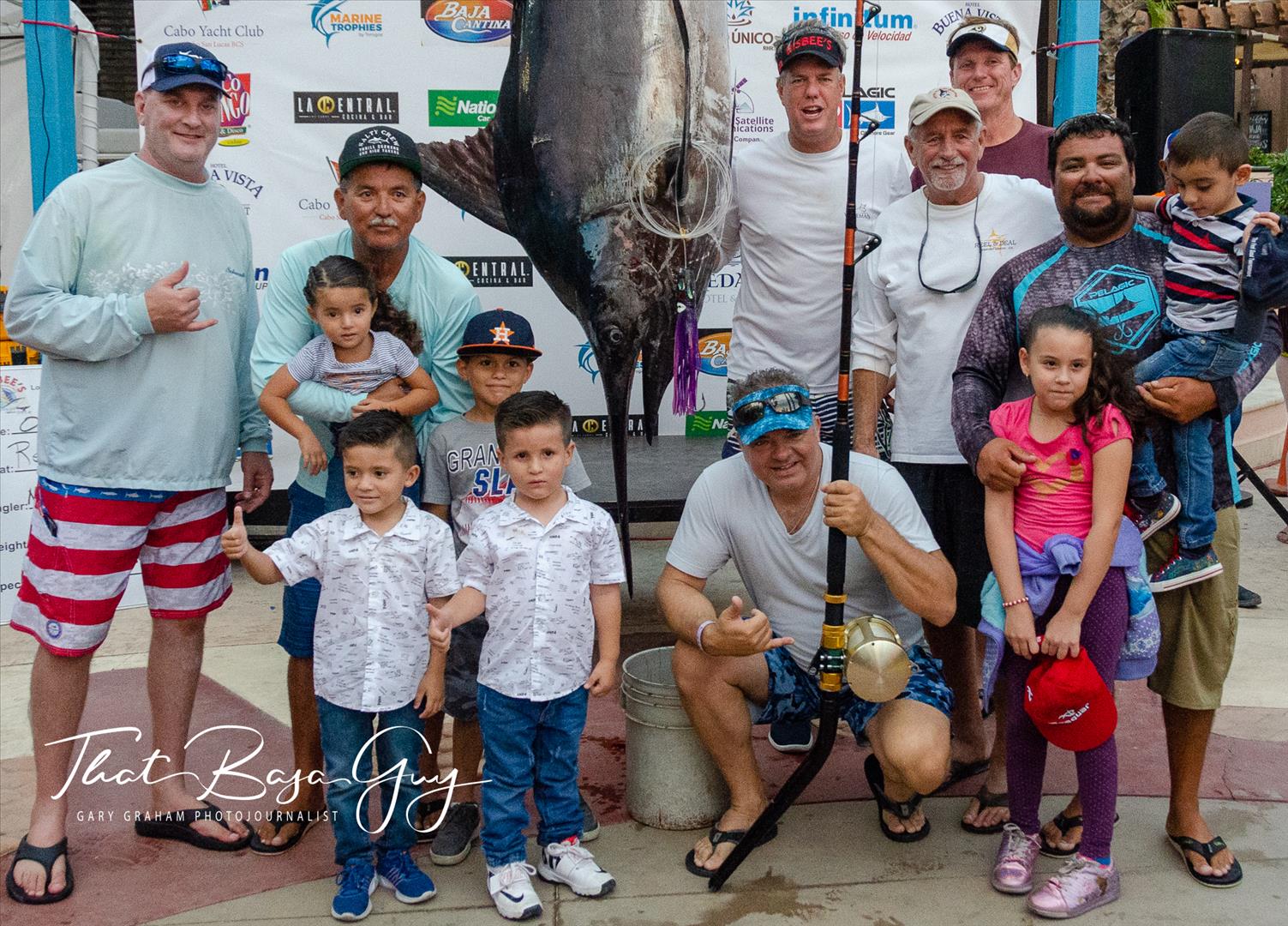 Once again, the Gordo Banks and beyond was where many of the LCO team boats chose to spend the last day of the tournament hoping to land either a giant dorado, yellowfin tuna or billfish. Not only is that where the most boats were working but it also produced the first boated tuna of the day just before 11 a.m. for the angler, Cesar Alberto Carrillo Sanchez on Team “Tuna Killers” -- go figure.

It was close to high noon when Jay Bush of Team “Surtchingo” boated the first blue marlin.

There seemed to be a decent volume of fish, judging by the number of billfish releases reported; the trick was to find one that would meet the qualifying 300-pound weight.

The “Outcast” finally connected with a black marlin that they were sure was a qualifier that they boated around 3:30. Later, angler Mike Phillips observed, “I thought I was gonna’ die!  We had trolled a live skipjack all afternoon and decided to switch to lures and maybe change our luck. I was up, so I snatched the rod out of the holder and set the hook. My arms ached by the time it was gaffed an hour and 48 minutes later!”

The final billfish of the day was a black marlin boated at 5:04 p.m. by Nando Silvestri aboard the “Reel & Deal,” a 55-foot Viking whose homeport is Newport Beach, Calif. -- the international team has members from Baja Sur, California and Texas.

The tournament fleet prevailed despite the cranky afternoon seas until the official “lines out, stop fishing,” was called by Tournament Control at precisely 5:00 p.m.

In the “it ain’t over til it’s over” department, Mike Waiseth aboard Paul Fruchbom’s “Quiteña,” a 62-foot Viking, skippered by Rich Hamilton, hooked a blue marlin only a few minutes before lines out; it was released at 5:06.56 p.m., securing them a Third Place finish in the release division.

A large crowd gathered after lines out was announced at 5 p.m. on the Malecón in front of Puerto Paraiso Mall, eager to see what the successful teams might bring to the scale.

There were plenty of stalls dotting the walkway for the spectators to peruse as they waited, filled with Pelagic clothing, fishing wear, exotic coffees, fishing lures, Unique Tequila’s, Costa Sunglasses, hand-rolled cigars and much more. Restaurants lined the walkway providing excellent food and refreshments, as well as terrific places to sit and people watch.

The first team to arrive was “Outcast” with Mike Phillip’s black marlin; the crowd parted as it was pushed up the walkway from the dock to the scale where the final weight of 360-pounds was announced by Wayne Bisbee, Tournament Director.

A bit later as the “Marlini” tied up to the dock, the astounded helpers couldn’t believe their eyes. onila One observed later, “The tail was this big!” -- as he extended both of his arms as far out as he could.

The excited crowd watched as half a dozen dockworkers huffed and puffed to remove the monster from the boat and muscle the beast onto the cart. Spectators with cellphones in hand jockeyed to get a clear shot of the still glistening black monster marlin.

It took four men to hoist the fish up on the scale. Weigh Master Jack Teschel waited for the digital scale to settle before hollering FOUR-HUNDRED-SIXTY-EIGHT POUNDS! The team high-fived one another and the crowd cheered so loudly that Bisbee couldn’t be heard even with a microphone.

Aristeo Gutierrez Gonzalez hugged each of his teammates as Bisbee announced that this was a LOCAL TEAM concluding with a VIVA MEXICO! And the crowd roared in response!

Bisbee added that the team had donated the fish to “Feeding Cabo’s Kids,” which would provide 1,200 meals for the kids. اونيلا After a final “VIVA LOS CABOS” to the crowd’s delight, Aristeo acknowledged this was his largest fish ever and the very first time he had ever won a sportfishing tournament. He added that the fish was caught at the Gordo Banks on a skipjack and had only taken an hour and twenty minutes to subdue.

Then the billfish parade ended, and the yellowfin tuna began with the “Team Tuna Killers” and Cesar Alberto Carrillo Sanchez’s fish weighing in at 56.3-pounds turned out to be the largest yellowfin of the day. Cesar explained that not only was the fish their only bite, but it had eaten a live bait, and was landed in 30-minutes.

The “Gaviotas” returned on Saturday with another yellowfin tuna weighing 48.3-pounds, making it the only team that made it to the scale both days.

Oh, and one more thing. The “Gaviotas” were the second Mexico Team to the scale for the day as well, hailing from Rosarito in Baja Norte. Although this was their first tournament win, they plan to fish in the WON Tuna Jackpot in November. Guillermo Pimentel shared that he had caught the big fish on a live chilwilli.

The final unofficial outcome for the second day:

We look forward to seeing all the participants tonight at Maria Corona!