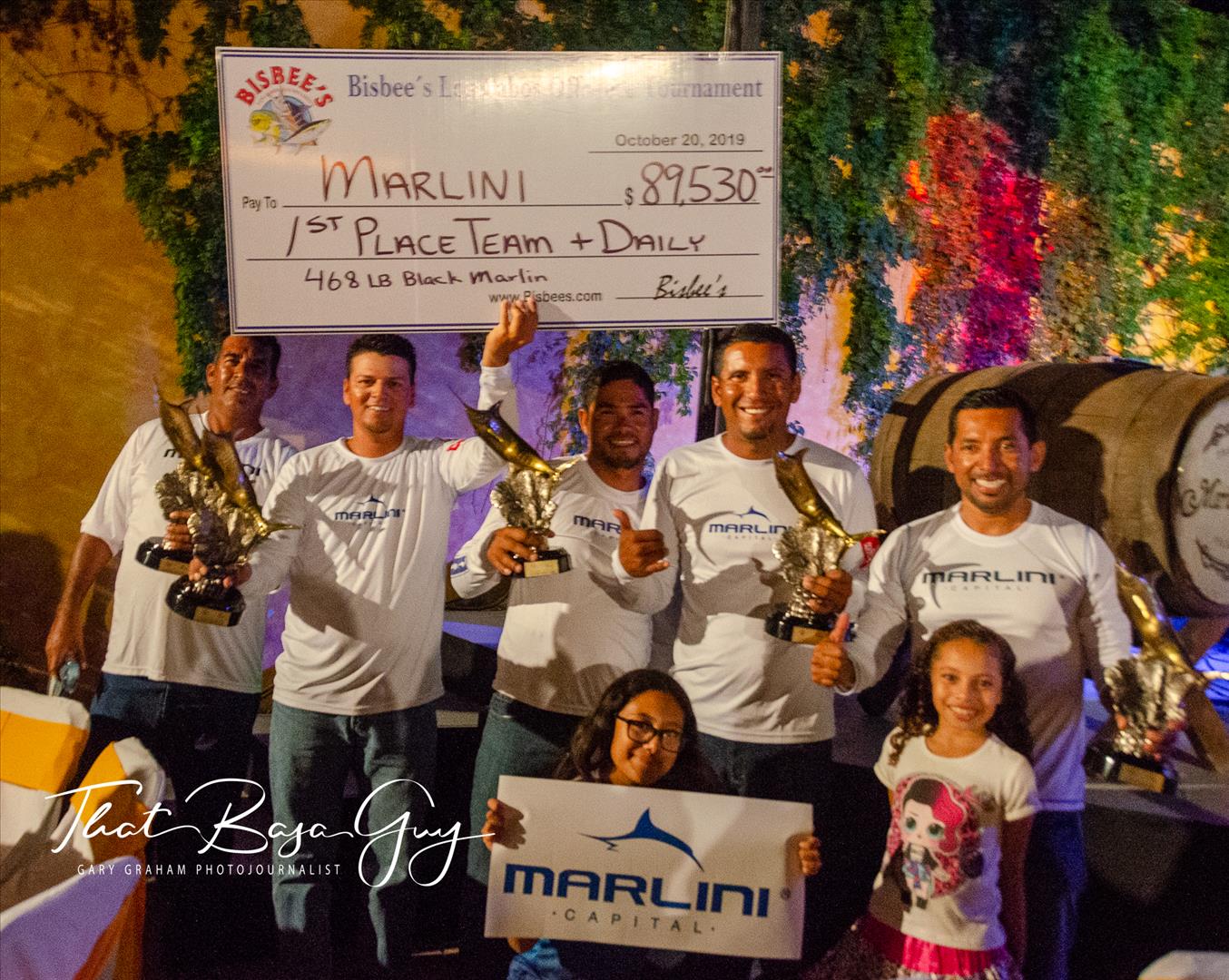 From start to finish – with virtually no downtimes – the just concluded 2019 Bisbee’s Los Cabos Offshore Tournament was a bang-up event, made more so by the $1,274,150 distributed when it was all over.

“Blue marlin, black marlin, striped marlin, and two tuna brought home the paydays for 120 entries of 480 anglers plus boat captains and crews working both the Sea of Cortez and the Pacific Ocean out of Cabo San Lucas,” said event director Wayne Bisbee.

On Day One, most of the fleet headed toward Gordo Banks, although a few of the boats elected to go around the corner up into the Pacific. Within 45 minutes, the first striped marlin of the day was released by Shane Linder on the Fisher Brothers Team.

Once Linder called in his fish, the floodgates opened as calls reporting hookups came crackling into Tournament Control on the VHF radio to Axel Valdez, owner of Hotel Buenavista Beach Resort in Buena Vista, while Jill Christiansen recorded the information on CatchStat.

By 11 a.m., there were 23 reports of recorded releases of both blue and striped marlin, as well as sightings of dorado, but nothing had been boated.

The unofficial score on Day One showed the “Predator”  and angler Jarrod Smith with a blue marlin weighing in at 328 pounds.

While aboard the “C-Rod,” Tyla Armstrong boated a 157-pound yellowfin tuna.

The final fish of the day was a released blue marlin aboard “Pour Decisions” by David Manry.

Day Two:  Once again, the Gordo Banks and beyond was where many of the team boats chose to spend the last day of the tournament hoping to land either a giant dorado, yellowfin tuna or billfish. Not only is that where most of the boats were working, but it also produced the first boated tuna of the day just before 11 a.m. for angler Cesar Alberto Carrillo Sanchez on “Team Tuna.”

It was close to high noon when Jay Bush of “Team Surtchingo” boated the first blue marlin.

According to tournament officials, there seemed to be a decent volume of fish, judging by the number of billfish releases reported, but the trick was to find one that would meet the qualifying 300-pound weight. 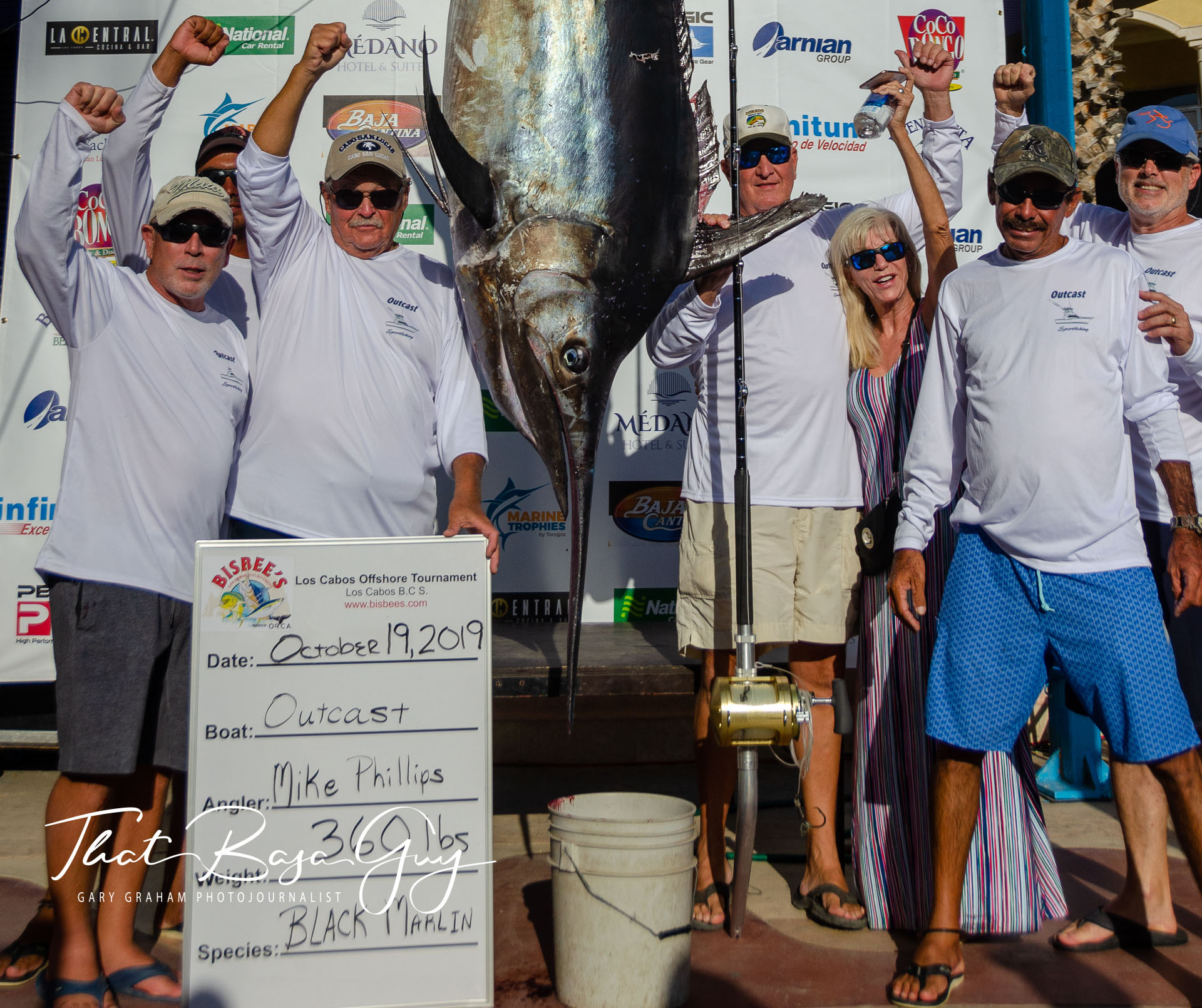 The “Outcast” finally connected with a black marlin they were sure was a qualifier that they boated around 3:30 p.m. Later, angler Mike Phillips cracked, “I thought I was gonna’ die!  We had trolled a live skipjack all afternoon and decided to switch to lures and maybe change our luck. I was up, so I snatched the rod out of the holder and set the hook. My arms ached by the time it was gaffed -- 1 hour, 48 minutes later!”

Big winner during the annual tournament was angler Jarrod Smith, aboard the “Predator,” whose combined first and second-day jackpot winnings totaled $444,825.

The largest fish of the Los Cabos Offshore tournament was a black marlin landed by Aristeo Gutierrez Gonzalez aboard the sportfisher “Marlini.”  Aristeo acknowledged this was his largest fish ever.  He added that the fish was caught at the Gordo Banks on a skipjack and had only taken an hour and twenty minutes to subdue.

When the “Marlini” tied up to the dock, the astounded helpers couldn’t believe their eyes.

A half a dozen dockworkers worked to muscle the monster onto the cart, while onlookers jockeyed to get a clear photo of the still glistening giant black marlin. 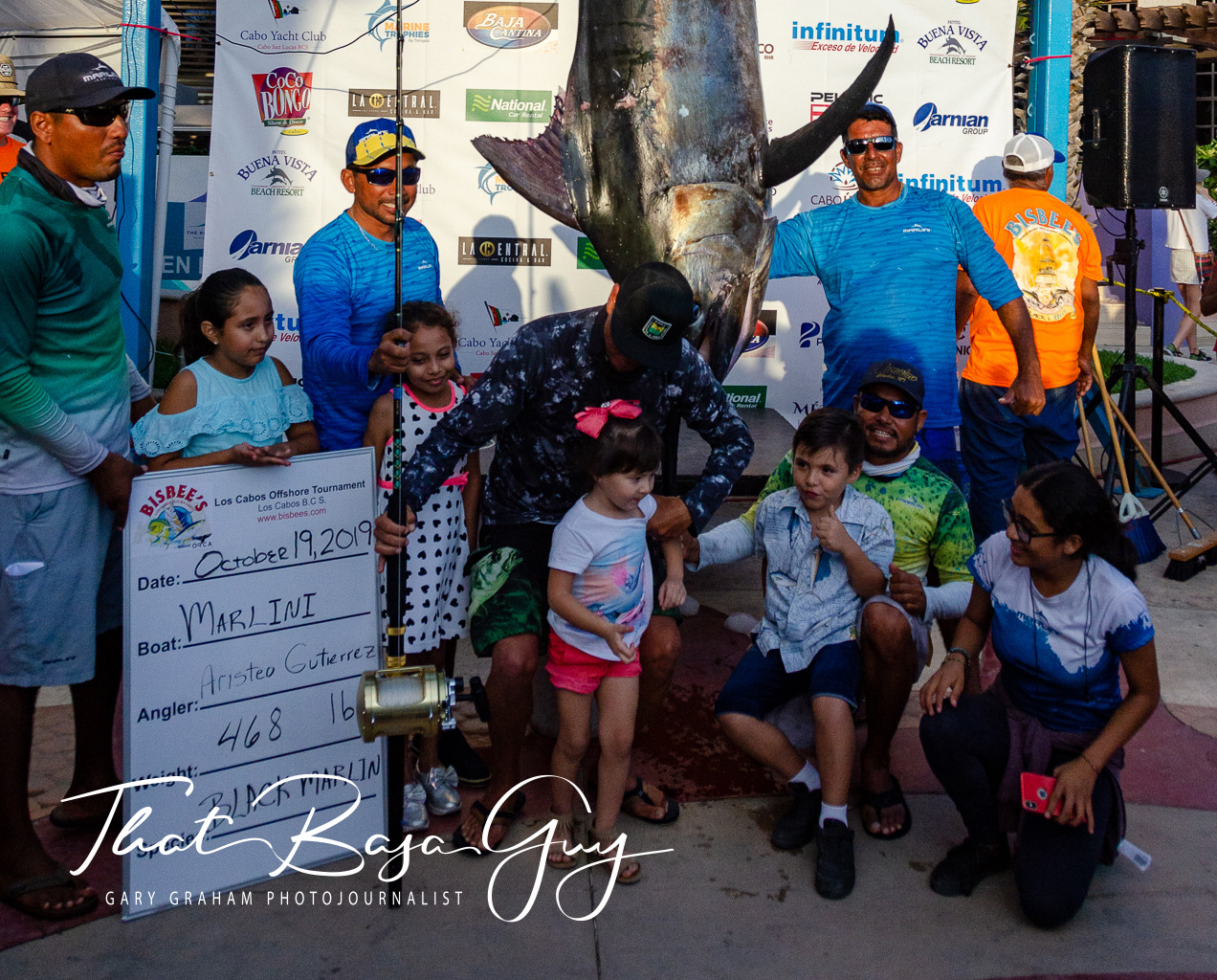 Four men hoisted the fish up on the scale while Weigh Master Jack Teschel waited for the numbers to settle before hollering the weight: FOUR-HUNDRED-SIXTY-EIGHT POUNDS! The crowd cheered so loudly that Bisbee couldn’t be heard even with a microphone.  After the team high-fived one another, Aristeo admitted this was the very first time he had ever won a sportfishing tournament! The massive billfish won the team $90,365.

The team donated the fish to “Hope for Los Cabos,” which would provide 1,200 meals for the kids.

The final billfish of the day and the tournament was a black marlin boated at 5:04 p.m. by Nando Silvestri aboard the “Reel & Deal,” a 55-foot Viking from Newport Beach, Calif. – the international team had members from California, Texas, and Baja Sur.

There were 192 fish caught or released during the event, including 10 dorado, but no qualifiers; 95 striped marlin, 61 blue marlin, 10 black marlin, 3 sailfish, and a spearfish.

More than 2,519 pounds of fish were donated by the teams to “Feeding Los Cabos Kids,” whose staff and volunteers cleaned and delivered the filets that provided an estimated 7,557 meals several children’s feeding centers, rehab centers and many individual families in the barrios.

Launching into the highlight of the evening for at least the nine teams listed above, Wayne Bisbee observed that looking at the amount of the checks written and the number of teams competing, there were no longer any “Baby Bisbee” tournaments!