Teams Wild Hooker and True Grit won the extraordinary sums of well over $1 Million each on Days One and Two of the Bisbee’s Black & Blue Tournament in Cabo San Lucas.

Day Three has arrived, and the other 124 teams are looking for the opportunity to stand on the awards stage alongside the first two lucky teams on Sat. Night to accept a similar check. أونيلا If that happens, it could be three approximately $1.3 Million checks issued on three consecutive days … another world record. 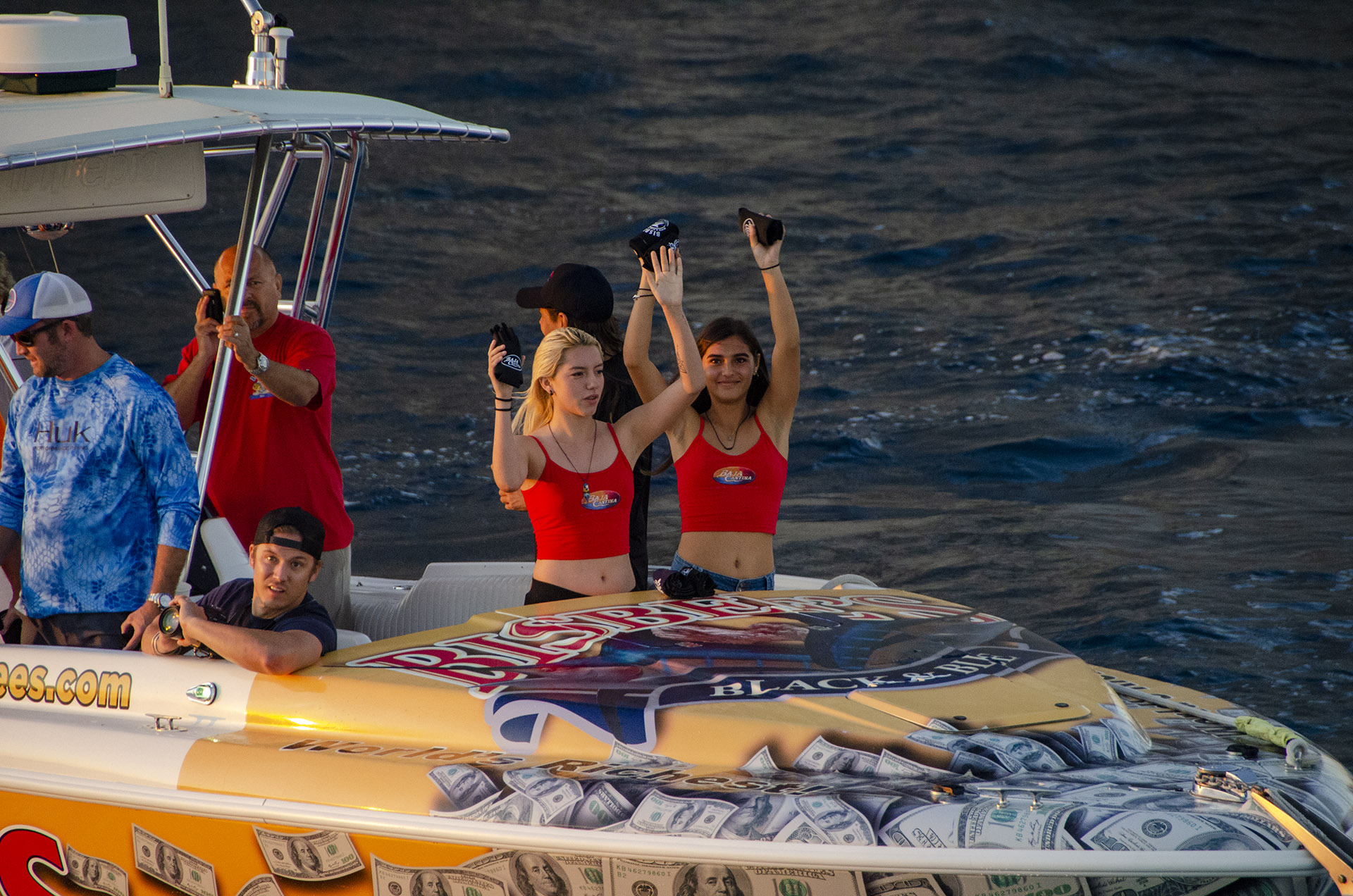 Inspired by bead-throwing in years past, an addition this year was the distribution of Cozi Cups to most of the 120 team boats as they gathered for the flare gun start each morning. Although most boats caught the cups hurled from the staff and Baja Cantina Girls, many missed their mark and were picked up by enterprising water taxi drivers.

Day Two was astonishing in several ways. Let’s begin with Team Stella June and angler Jazz Moorhead.  First thing early morning, as they were successfully catching bait, they put one of the first bait caught out on a downrigger. While Moorhead still held the line, it was snatched out of his hand and came taut on the rod tip.

The captain tried to reach Tournament Control to report the hookup, yet before receiving a response, five minutes later, a giant grouper floated to the surface. With adrenaline pumping, the crew re-rigged the downrigger and began fishing. 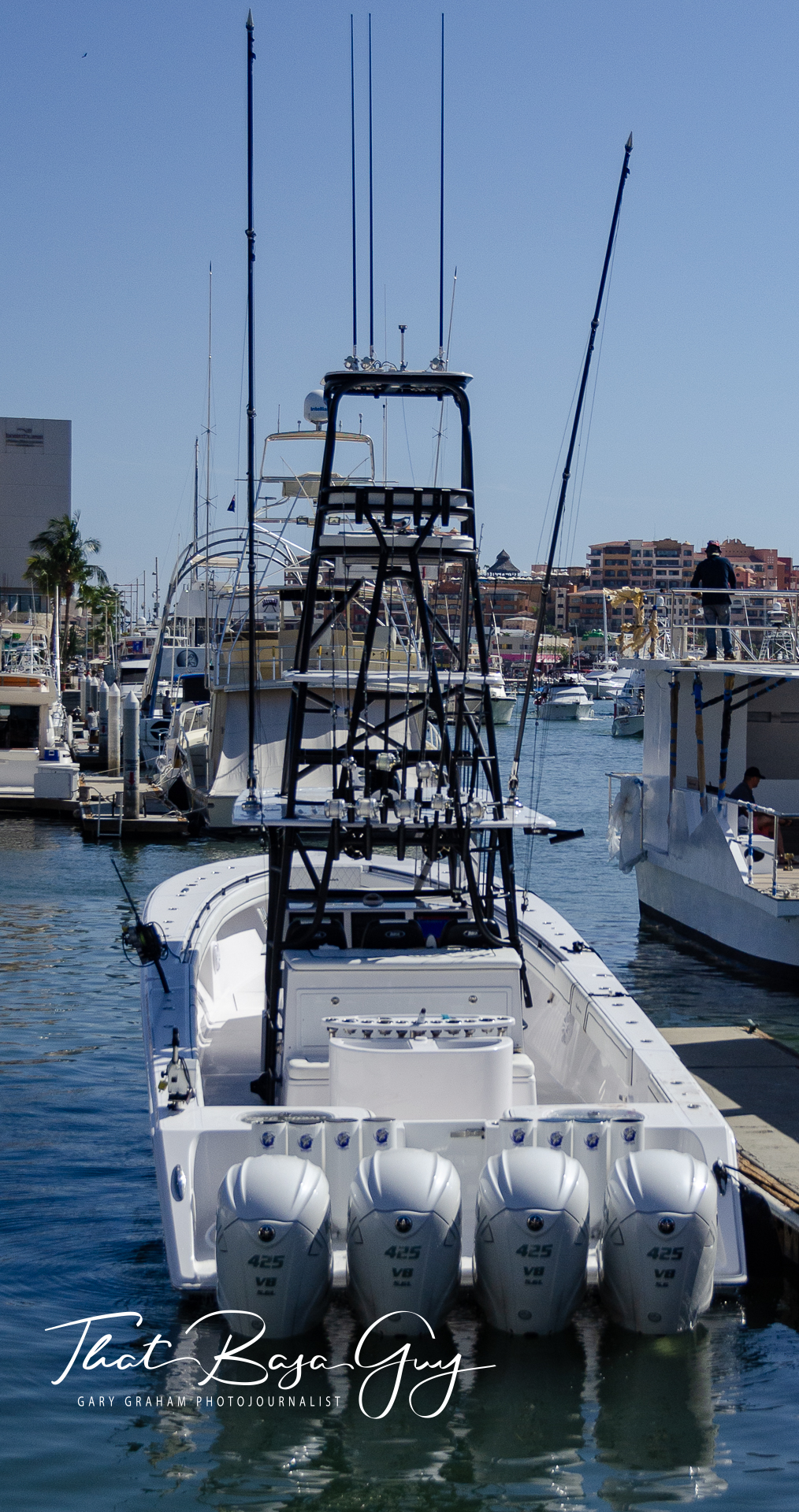 It would be late morning before their turn finally arrived. This time it was a solid bite, and when the black marlin surfaced and leaped across the water, the team was sure it was a qualifier. The tug of war lasted about an hour before the beast was safely loaded into the boat.

Up to this point, there was nothing unusual about the good-sized fish, and they sped to the scale in their tricked out four outboard-motor powered skiff. At the Weigh Station, the crowd grew as the black marlin was hoisted to the scales; Jack Teschel, Weigh Master hollered, “466 pounds,” and everyone began cheering.  The cheers ended quickly when several perplexed spectators questioned the call. That was the exact weight as Marlin Hooker’s fish on the first day.  And, when the crew measured it, the dimensions were identical to the one the previous day. No one could remember this ever happening before in any of the Bisbee Tournaments. 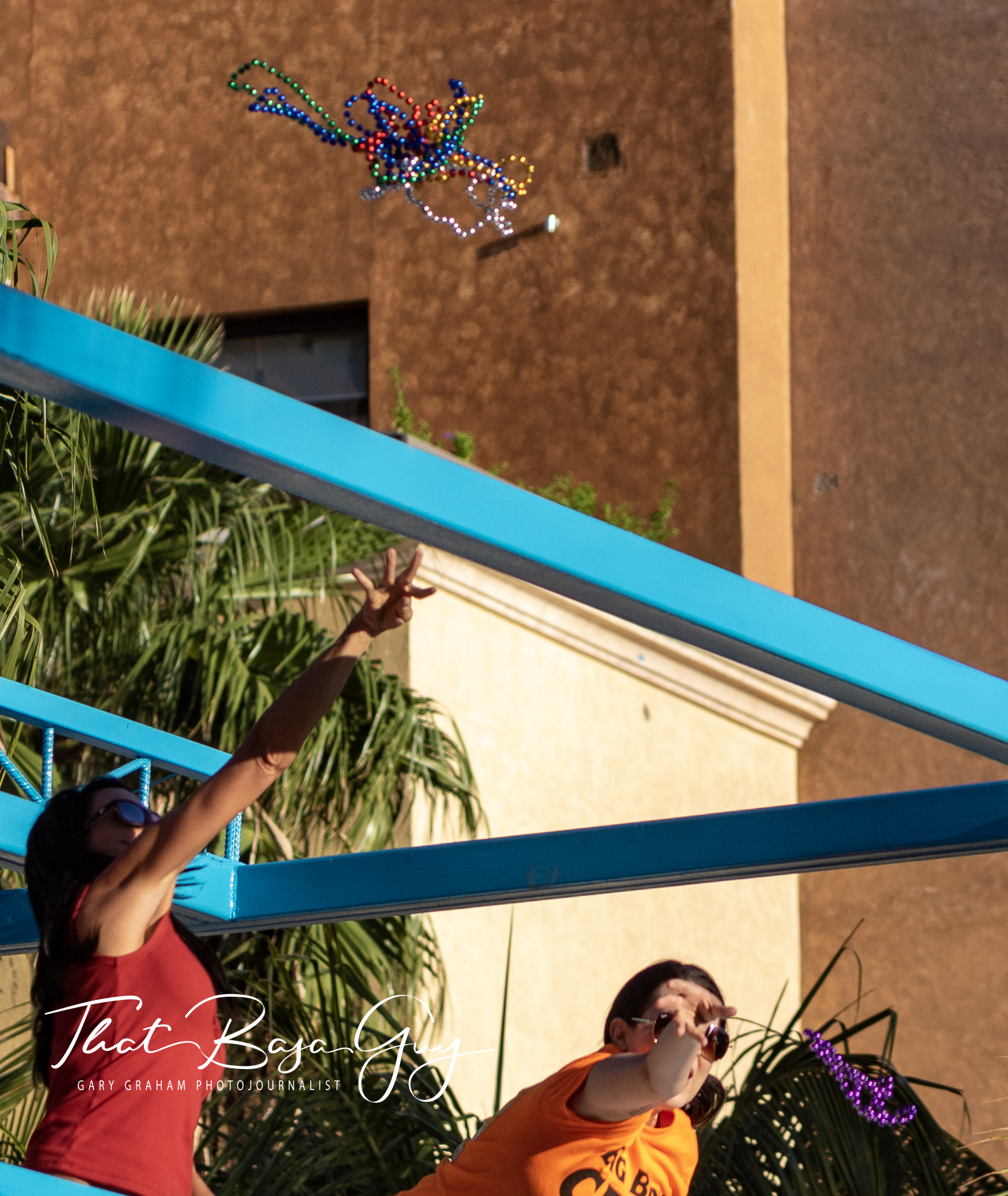 Throughout the day, the staff climbed atop the scale frame and did their best to keep the crowd happy until each fish arrived – flinging Mardi Gras beads at or to the spectators assembled below.

Team member Ryan Griffen laughed, “We really had a good feeling this morning; we put 110% into this fish. We just had one of the most exciting days of fishing in my entire life. Beyond that, nothing is going to make a difference.”

A little while later, Team Travesia arrived aboard Knot Working, a 35-foot Cabo Express with a 370-pound blue marlin that Juan Antonio Torreblanca had landed in 35 minutes.

Los Tapatios from Guadalajara was next to arrive with a larger black marlin that tipped the scale at 387 pounds; it had taken Francisco Loeza two hours and one minute to boat.

After lines-out, a crowd favorite, the boat Hooray, a 68-foot Viking owned by Erik Dunn, arrived, representing both North and South Carolina. Carmine Galati, of Galati Yacht Sales, recently opened an office in Cabo San Lucas with Tracy Ehrenberg. The entire team and their families crowded into the weigh station area as the blue marlin was hoisted up on the scale. The anxious look on many of their faces disappeared as Teschel shouted, “309-pounds,” confirming that the fish was a qualifier … the crowd burst out in “Hooray for Hooray.”

When asked, Dunn bellowed, “You bet we are excited! I’ve been a lot of places and caught a lot of fish, but nowhere compares to Baja! How awesome it was today to be fighting this great fish while we sipped tequila and were close enough to look at the sandy beach.” 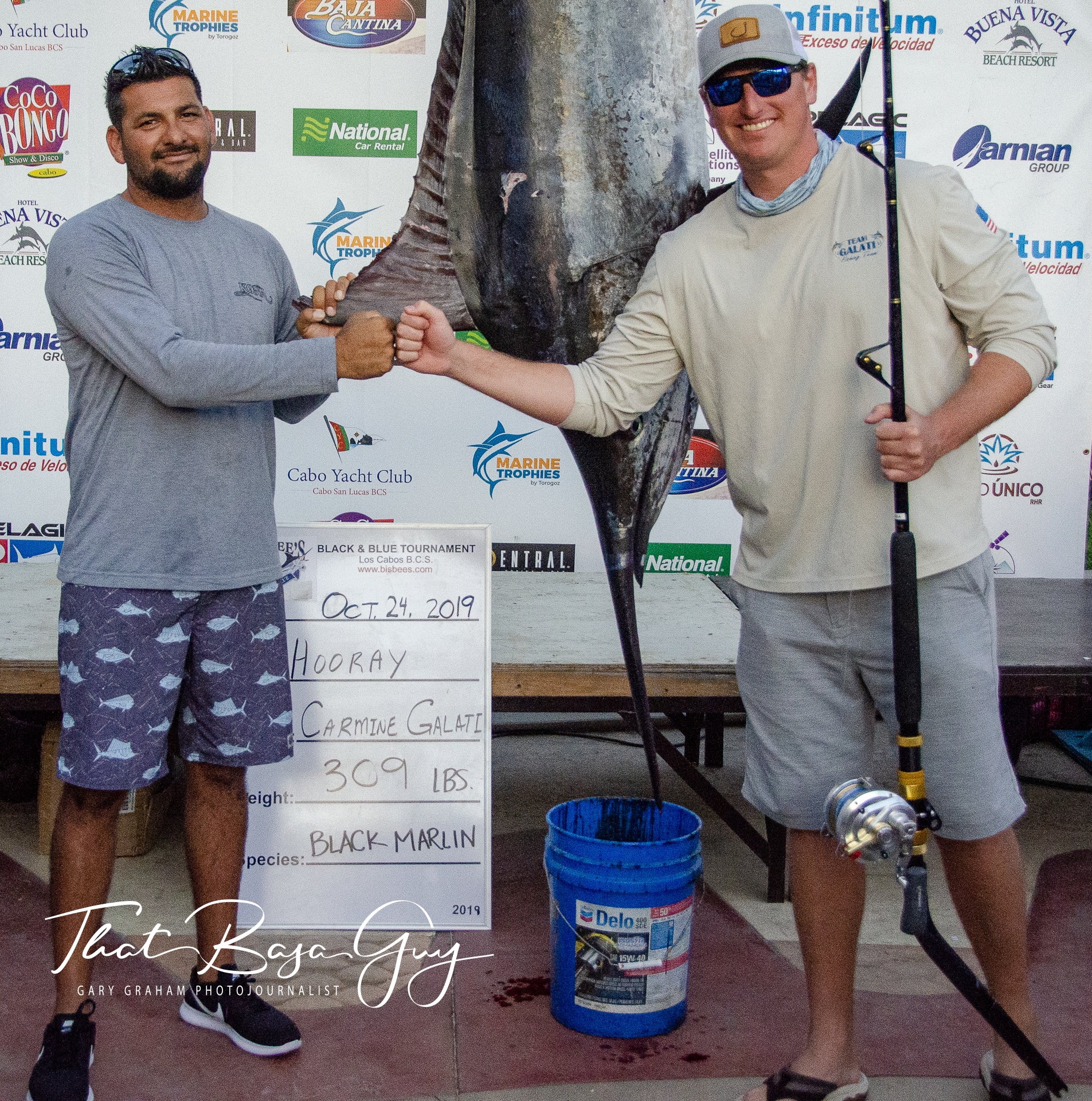 He continued, “Watching how we worked and how calm we were. It’s all teamwork from Captain Pancho on down – everybody doing the right thing. Everybody is trying hard. Our team is an extended family, and I can’t say enough about Galati and their help building us world-class fishing machines!”

Smiling, Dunn continued, “They are a big part of our success. I’m telling you, when you get involved in something like boating and sportfishing, you must go through the process to achieve greatness. They help us get the boats, win the tournaments, and then he fishes with me as part of my family.”

Also riding along was Captain Steve Lassley of Bad Company fame, who now is a representative of Galati Yachts in Los Cabos.

Bisbee presented Dunn with two cases of Orka custom-engraved cups that he had made.

The last and the largest fish caught on Day Two was aboard True Grit, a 68-foot Hatteras owned by Jim Putman, skippered by Captain Tommy Neikirk and joined by other team members from Hawaii and California. Putnam was also the angler who caught the 498-pound black marlin taking nearly 2-1/2 hours to subdue. 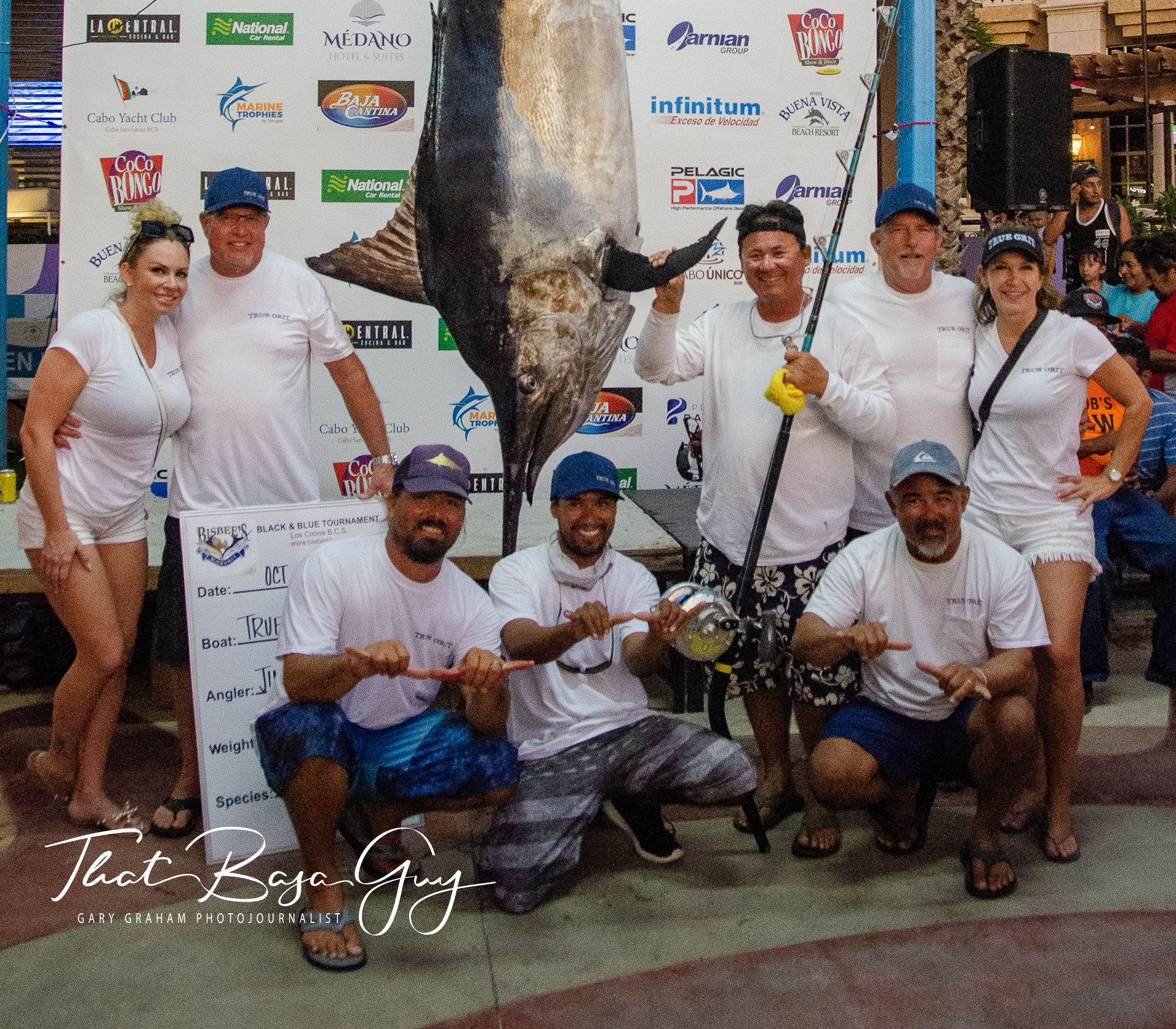 When asked, Putman credited Captain Neikirk with introducing him to the world of sportfishing tournaments during the past three years. He added that he was amazed at the progress in the sport they had made during those years.

As the huge fish was wheeled into the Weigh Station area, the crowd went wild. The largest black of the Black and Blue thus far was pulled up to be weighed, and the crowd erupted when the final weight of 498 pounds was announced. Wayne Bisbee said the team was in across the board, meaning their winnings for the day would be approximately $1.3 million.

Once again, Jen Limpert stated that the teams had donated 2,050 pounds of fish, which would provide 6,120 meals for Los Cabos Kids.

And finally, for all of those teams that are longing for their first trip to the scales, it is time “TO SHUT UP AND PITCH!”

See you all at the weigh-ins!